Almost without a hitch the state’s #2 and #3 Division IV teams advanced to Monday’s volleyball sectional final.  And no surprise…they’ll play each other!

New Bremen – It’s the kind of thing that people in the MAC live for, one would guess.  In a conference that oozes competition, nothing goes unchallenged, not even the sectional round of the Division IV volleyball tournament (Van Wert district).  There simply are no easy outs.

But, Fort Recovery’s size and experience prevailed over the next three sets, thanks in part to Cassidy Martin’s 24 kills…and a stubborn New Knoxville effort of efficiency.

Martin, a senior middle hitter began to find the range midway through the second set to lead all scorers in kills…but more importantly, she seemed to instill a confidence missing at the outset of the match.  Knoxville, as they had done a week ago against #6-ranked Jackson Center, attacked, and left little doubt that they were there to win!

“It was exactly how it was the first time we played them,”  said Recovery coach Chelsea Kahlig.  “I think we were down seven points in that match and we were able to battle back and win those sets, and that’s what happened tonight.  The first two were 25-23, and they always seemed to make a rally after we made a rally.  They really made us work and we had a lot of girls step up for us tonight who had been quiet for the past couple of weeks. 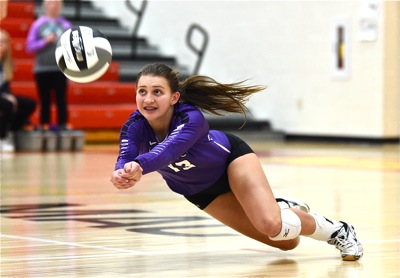 “Obviously Cassidy was huge for us and really got the job done with her 24 kills.  She was unstoppable and she didn’t even practice yesterday because she was sick.  So for her to bounce back and do what she did was phenomenal.”

As for the competitive element of this Van Wert sectional, it’s a far cry from some of the ‘easy outs’ found in other Div. IV sectionals, particularly in the southwest district.  Kahlig says it not only doesn’t bother her, but that she prefers the heavier challenge.

“I’d take this kind of competition in a heart beat,”  she said.  “I’m a competitive person and I told the girls that this will be one of the toughest sectional finals you’ll ever see.  Last year we had to play Marion Local, and you have to play the best if you’re going to advance.  So you might as well get them out of the way.”

But in the night’s second match between #3-ranked New Bremen (19-4), the defending state champion Cardinals won over Minster (12-11) in straight sets, 25-20, 25-19, and 25-17, setting up Monday’s sectional final rematch with Fort Recovery, a team that beat the Cardinals last week in straight sets. 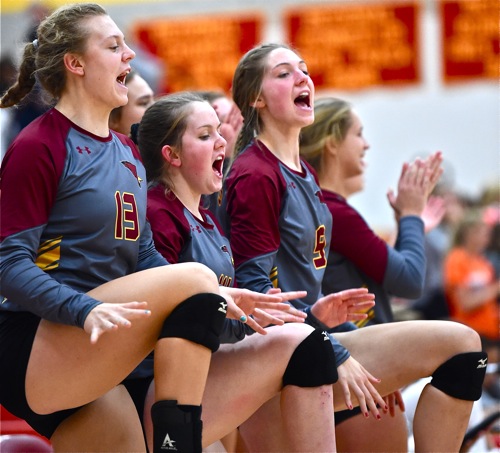 New Bremen won as they’ve won all year, by serving aggressively, hitting aggressively, and spreading the responsibility around.  Hardly the biggest team in the field, they make up for it with their own competitive personality.  But they also entered Thursday play with a cloud surrounding them.  Instead of peaking as they did prior to last year’s tournament, the Cardinals had struggled to find their way against their final two conference opponents.

“Offensively we were really good tonight,”  said coach Diana Kramer.  “We had some struggles here and there, but overall we were solid.  We were aggressive, and that’s our goal every time we go out.

“We also played with some confidence tonight, you know, because we had some tough times the last two weeks (losses to Recovery and Coldwater).” 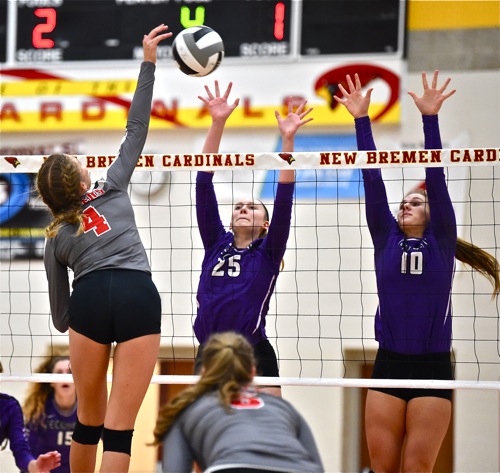 But Minster, a team that hovered around the .500 mark over the second half of the season, never let Bremen pull away in the first two sets, forcing the Cardinals to play hard to the 25th point.  Not until the 15-8 point of the third set did the champs finally separate themselves and find some breathing room.

“Responding the way we did after last week, I’m really proud of our effort,”  added Kramer.  “And they had some fun tonight.  And when you have fun and you’re playing with people that you love, anything’s possible.  This team is really hungry, and ready to move forward.”

So, in typical MAC fashion, it sets up the inevitable tournament rematch in these sectional and district rounds – of New Bremen and Fort Recovery – a challenge that both coaches seem to relish, despite the obvious consequence.  Only one team can win and move on.

“It’s means everything to us,”  says Kramer, who eschews any celebrity that comes with their #3 ranking.  “You know, we didn’t play very well against them (last week) and they played really, really good.  But my team’s tough and I’m confident that if we do what we’re supposed to do, play the way we know we can play, the sky’s the limit for us.”

They’ll get that chance, Monday night, October 22nd, at Van Wert High School.  The match is set to begin a 7:30 pm. 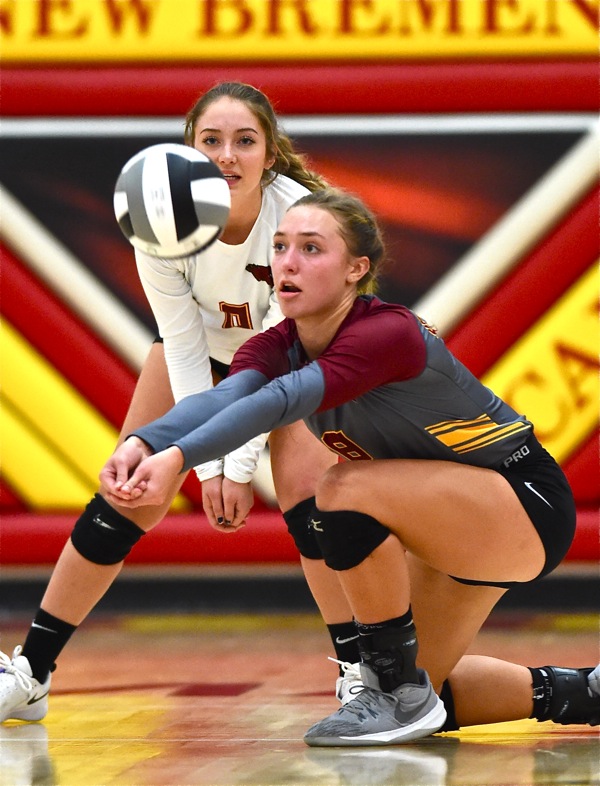 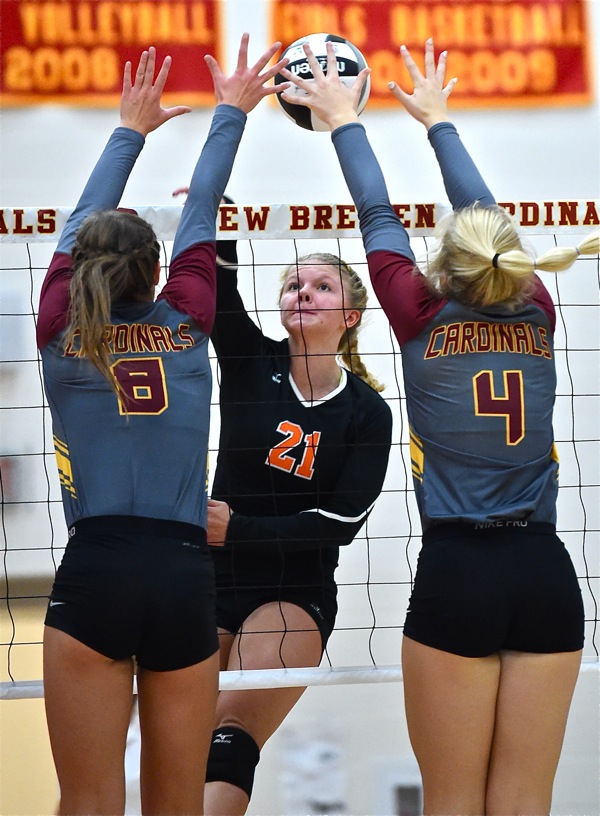