All four members of Troy’s starting secondary had interceptions — including three by Weston Smith — as the Trojans’ top-ranked GWOC defense held Sidney in check for a 38-19 win.

Troy – It was a bit sloppy and a little messy at Troy High School on Friday night. And the weather wasn’t much better.

The Troy Trojans had one of those games with some penalties to clean up and a passing game that struggled in the rain. But Troy coach Matt Burgbacher summed it up the best way possible.

And this late in the season coaches will take a win just about any way they can get it. On Friday night that meant a tenacious run defense, turnovers and a 1-2 punch in the backfield for the Trojans.

But Troy intercepted Dunham six times, including five in the second half. Troy junior cornerback Weston Smith had three of the interceptions and returned them for 68 yards. Free safety Jacob Shoop, strong safety Jacob Adams and cornerback Kobe Feltner also picked off passes.

“On the film they were passing all the time. More than anything we’ve seen,” Smith said. “I was excited. Finally I had an opportunity to come out here and get interceptions.”

Troy held Sidney to 191 yards overall, with all of them coming through the air. The Yellow Jackets rushed 22 times for zero yards.

“We were going to have to stretch them out vertically and horizontally to try to find some seams in the run game,” Sidney coach Adam Doenges said. “They’re just too good in the run game. With the pass game they’re really, really good at bringing pressure.” 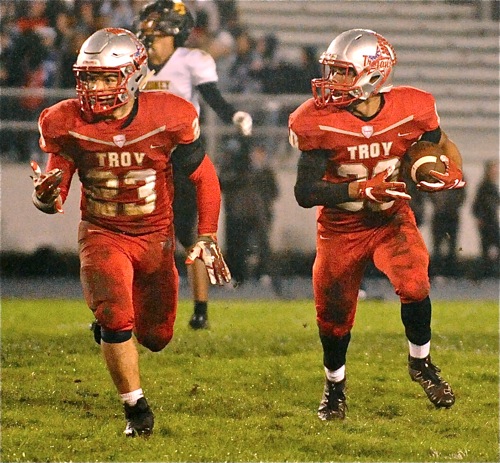 Troy’s Shane Shoop leads the way for Jacob Shoop on an interception run back.

Troy’s own running game didn’t slow down even with GWOC leading rusher Jaydon Culp-Bishop sitting out the majority of the second half to rest a tight hip that wasn’t helped by Friday night’s cold, wet rain. Culp-Bishop still rushed for 137 yards and three touchdowns on 30 carries.

Culp-Bishop had touchdown runs of seven and five yards in the first half and added a three-yard run in the opening minute of the third quarter to give Troy a 31-7 lead.

“I think they’re better than what they were last year,” Doenges said. “The secondary is better than last year. They’re a nice team. There’s a reason they’re going to keep battling to be the GWOC North champions.”

With the game in hand, Culp-Bishop gave way to Sam Jackson. Jackson added 50 yards and a touchdown on 17 carries as the Trojans rushed for 181 yards.

“That’s the luxury we have,” Burgbacher said. “We have some pretty good backs. With Jaydon a little banged up it’s nice to have a guy like Sam come in. I know Sam loves to carry the football. I certainly wouldn’t want to tackle him.”

Troy led 14-0 on Culp-Bishop’s first touchdown run and Caillou Monroe’s 35-yard touchdown pass from quarterback Brayden Siler. Siler rolled out under pressure and heaved the ball to the end zone where Monroe made a shoe-string catch for his third TD catch this season.

Sidney pulled to 14-7 on a 13-yard touchdown pass from Dunham to Ratez Roberts in the second quarter. Culp-Bishop’s second TD and Siler’s 24-yard field goal gave Troy a 24-7 lead that appeared safe heading into the second half.

Troy extended the lead to 31-7 on another short Culp-Bishop run before Sidney answered with a 59-yard touchdown pass from Dunham to Lathan Jones to make it 31-13 with 4:38 left in the third quarter. 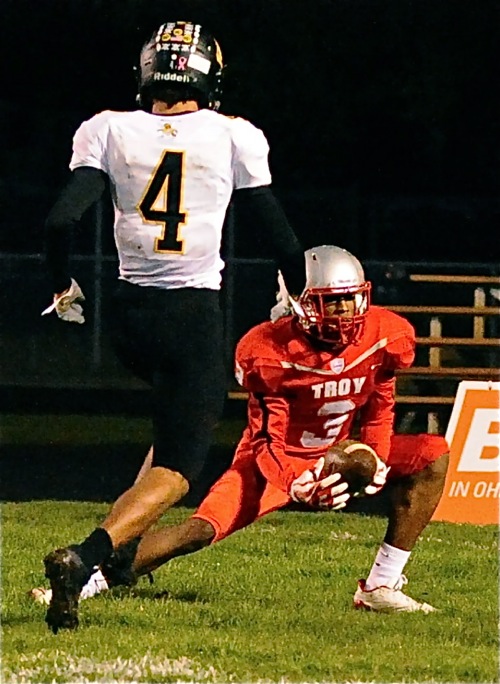 Jackson’s one-yard score early in the fourth put Troy up 38-13. The Yellow Jackets capped the scoring with 5:14 left in the fourth quarter on a 17-yard strike to Roberts.

“This was the first team that really pushed vertical on us,” Burgbacher said. “I thought our defense played well. I liked how our kids responded and reacted.

“The couple of big plays we gave up, both were great throws. Weston had good coverage. Give them credit. … We got the win. We got what we wanted and now we’re going to move on.”

Troy improved to 7-1 overall and 3-0 in the GWOC American North. The Trojans sit at No. 3 in the Division II, Region 8 computer playoff points with Greenville and Piqua remaining on the schedule.

“We’ve got a lot of areas where we can still improve. It’s great to be in this position. We just have to keep the right mindset and keep working to be better.”

Sidney dropped to 4-4 but still has goals it can reach with Butler and Greenville remaining.

“As you set your goals for the year you have levels. When things don’t work out the way you want you still have things to shoot for,” Doenges said. “What we have to shoot for now is playing for a winning record. That doesn’t happen in back-to-back years a heck of a lot around here.” 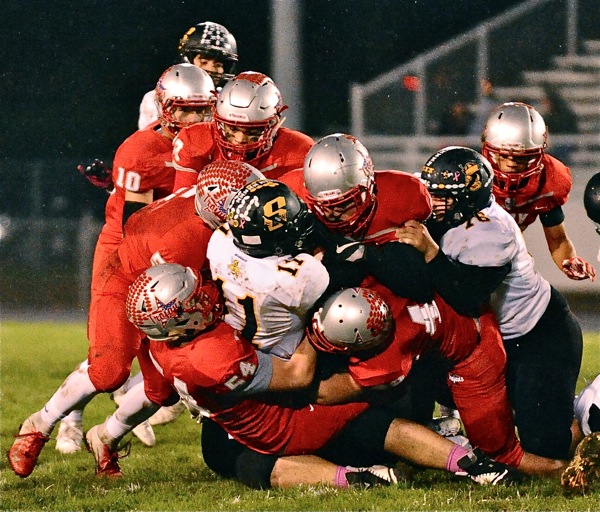