The latest responses from Press Pros readers across the cyber world…on psychics, the Reds and major league baseball, Roy Baker, and appreciation from out of the area on our high school volleyball coverage.

Apparently, our column from September 9 on death and dying, and those who can predict the future, is still drawing an audience. To wit, we share more from one with first-hand experience:

“I enjoyed your site and couldn’t believe my eyes. Someone actually wrote about psychics and mediums. And on a sports site! Anyway, I know quite a bit about people who can predict the future as my grandmother was a master at it, and did it for fun. She never charged anyone, but she was really good, and accurately predicted the gender of each of her seven grandchildren, and this was before ultrasounds and other testing. She also predicted the 9/11 tragedies, and no one believed her. She’s helped many of her friends and neighbors with their questions, so yes, there are people who do have this ‘gift’, and I can tell you with confidence that my grandmother was NOT a witch,  just a great grandmother.” … Deborah Florio

“I have had a relationship with a psychic for years and that individual has saved me hundreds of thousands of dollars in business by steering me away from bad people and bad opportunities. In addition, I owe my health to this person who shared with me that I had the early signs of cancer that routine screenings missed. It was there, it was found, and I’ve been fine for seven years.” … Michael (Columbus)

Our recent column on the Reds and what’s not working, drew a trio of ‘Amens’: 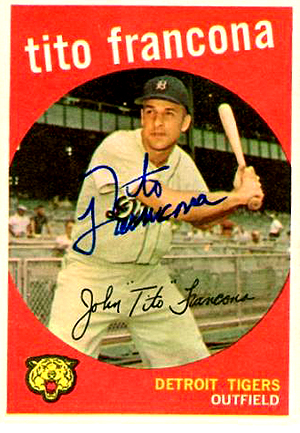 “Tito” Francona, the father of current Cleveland manager Terry, once signed a 1959 Topps card for me at Municipal Stadium.

“Just read your article on the Reds and cannot agree more. Management has adopted gadgets to try to entertain at the ballpark, but what people really want is to see how major league players play baseball. You could do that in the old days, but now you can’t get in early enough, or get close enough to even ask questions. To your point, you would get beaten and dragged out if you tried to talk with Michael Brantley.” … Ken Grano (South Euclid, Oh)

(Ed. Note:  Couldn’t agree more.  In the old days of Municipal Stadium you could hang out by the screen behind home plate and ask hall of famers like Bert Blyleven how he threw his curveball.  Now you’d be beaten to death for trying.)

“I haven’t been to a Reds game in five years and it’s not likely I will go again in my lifetime. It’s expensive, the games start too early, and it’s harder than hell to drive in Cincinnati if you don’t drive there everyday. There’s nothing enjoyable about the experience anymore.” … Robert Fichner

“What made baseball fun was the baseball, not a bobblehead.” … Neil Heller

Long-time Troy merchant Roy Baker was featured on Press Pros last week, and that story drew a response from a former patron:

“I remember BK Photo and Gallery well, and attended two of the Presentation Weekend art events. On both occasions Mr. Baker made it a point to welcome me to Troy, to BK, and thanked me for making the effort to be there. I think he was surprised that there were people like me. The Civil War show in 1999 was an amazing experience when I met (artist) Mort Kunstler.” … Rob Gallagher (Detroit, Mich.)

Finally, we have received numerous emails throughout the fall on our regular coverage of MAC and Shelby County League volleyball, but the most unique are those from other parts of the state who are following those same teams:

“Congratulations on your coverage of the volleyball in your area. It’s interesting to see how the top-ranked teams in the MAC are doing, and the chances of meeting those teams (hopefully) in the state tournament. You do a fine job.” … Chris Gallimore (Massillon, Oh)

“From your stories on the MAC and teams like St. Henry and New Bremen it would appear that the title will once again come through the southwest region, whoever wins it. Interesting reading and wonderful photography.” … Bill Sharp

But not everyone was pleased….

“I’m tired of reading about MAC teams (volleyball) when there are plenty of other good teams who deserve to be written about just as much. How about some fairness with your coverage?” … Kim

(Ed. Note: Kim, I’ve noticed for years that for some reason Sports Illustrated doesn’t write about Mount Union, and they play great football. Is that fair?) 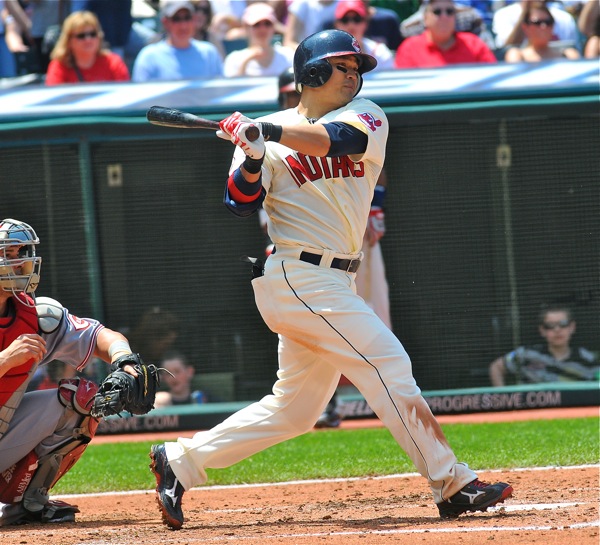 In response to our article on what's wrong with baseball, one wrote: "People don't want gadgets, what they really want is to see how major league players play baseball." (Press Pros File Photos)