Build It…And They Will Come!

Retired game warden Dan Hickey has turned his passion for the wildlife management into a working project that brings him peace and satisfaction every time he looks out his kitchen window. If he wants a better view…he just walks across the road.

There’s a very special piece of ground in Miami County, about a mile west of Rangeline Road, on Painter Creek, and just a hundred yards or so from the home of retired game warden Dan Hickey.

It’s special for the fact that in the middle of some of the county’s most prime farm ground…Hickey purchased sixty acres five years ago with the express intent of farming for a different yield. He wanted to grow wildlife, or more accurately, a wildlife sanctuary that would attract birds of all sorts, principally waterfowl. 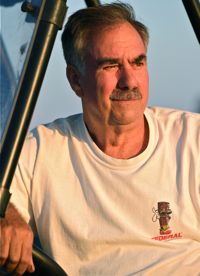 “It’s something I felt good about, and my son will enjoy it longer than I will.  He’ll probably outlive me.”  –  Dan Hickey

After years of watching and listening to corporate efforts by groups like Ducks Unlimited to raise money for habitat, a year ago Hickey decided to take matters into his own hands. He created a pair of ponds, surrounded them with 50 acres of nesting and forage grasses, wildflowers, and Wood Duck boxes, and with this year’s abundant rains his crop has already blossomed. He was recently awarded by the Ohio Department of Soil and Water for his vision and commitment.

“They’re really not ponds,” says Hickey.  “They’re called ‘wetlands’, because you’re not allowed to have more than three feet of water in them.  And to give you an idea of how it’s working, I sat in my four wheeler recently and counted eighty Blue Wing Teal.”

Hickey took me on a personal tour this past weekend. “And it’s only going to get better with time,”  he added, with a smile.

Admittedly, it is an odd place for a wetlands project, going against traditional thinking of neighbors and others who cannot understand why you take that much rich farm acreage out of production and turn it back to nature. 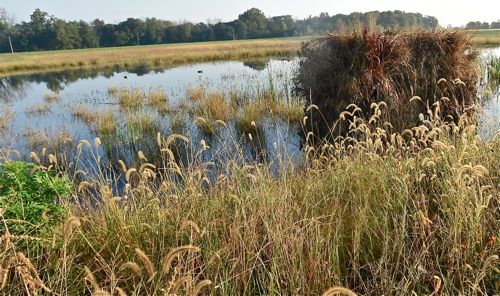 The idea is to attract ducks and other waterfowl to Hickey’s front row seat (above, right).

On the other hand, to the naturalist like Hickey it’s the perfect scenario for waterfowl and other wild species that need the basics of natural existence – cover, food supply, nesting ground, and water.

“Look at the bullfrogs,” Hickey pointed to me as he drove around the bigger of his two wetlands, a four-acre ‘pothole’ ringed with cattails, barnyard grass, and switch grass. “In a couple of years you’ll be able to come through here and gig a pretty good dinner of frog legs,” he laughed.

But in the meantime, he’s created a wonderland of anticipation, because on any given day you can sit and watch a variety of waterfowl pass through, from Teal to Mallards, Wood Ducks to Redheads, geese to railbirds. In natural terms it’s the equivalent of…if you build it they will come!

“It depends on the weather, and of course it’s been hot lately so some of the species of ducks really haven’t begun to move,” says Hickey. “Some of them, like the teal, stay for day and then move on. This is just a convenient stopover for them. Others will make it a more permanent sanctuary.”

It has not been cheap, in terms of money and time invested. Hickey has thousand of dollars and hundreds of hours in sweat equity invested, with periodic maintenance still left to do.

“What it needs is time for some of the grasses and wildflowers to become better established,” he adds. 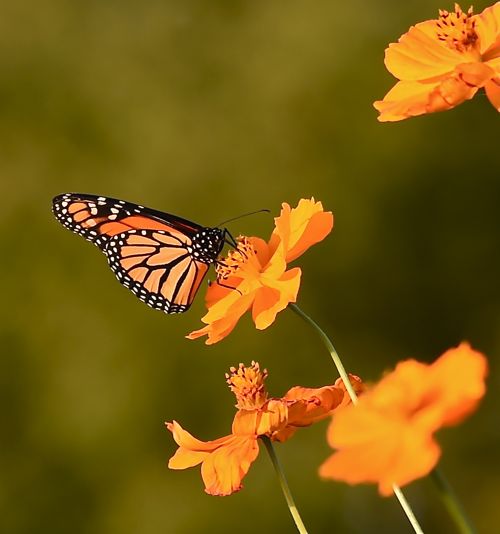 And one of these days you might be able to flush a wild pheasant, something that you can’t find presently in Miami County with a search warrant.

“It’s just something I felt good about doing, and I told my son that he’ll probably get more enjoyment and satisfaction out of it than I will. He’ll probably outlive me.”

But in the meantime he enjoys the view of his work coming to fruition with each passing flock of ducks and other wild species.

And in the mornings and evenings, the rising and setting sun creates a light show that few can imagine…because few that drive by even know it’s there. But given the fact that it’s right under Hickey’s nose, he’d be well aware if someone was disturbing his homemade marsh.

In the meantime, God’s plan for the environment is under the watch of one who’s dedicated his life to the management of natural resources. It could not be in better hands.

If you build it, indeed! 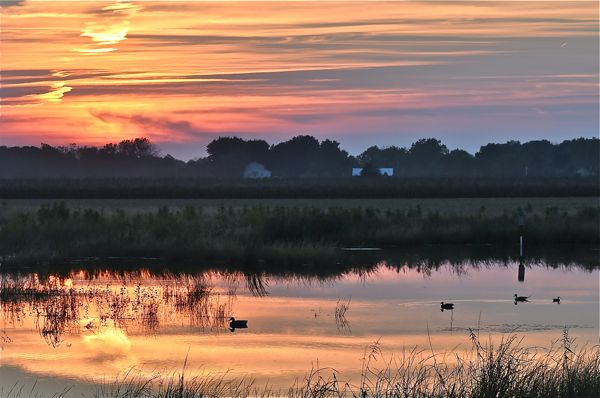 Open this year’s hunting season with a trip to Olde English, proud to sponsor outdoors content on Press Pros Magazine.com! 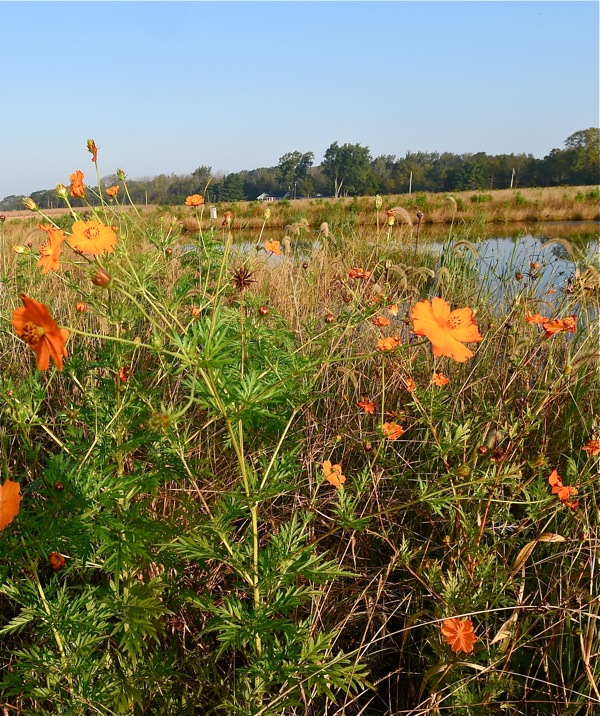 Within sight of his home (background), Dan Hickey has created an award-winning natural habitat for birds and waterfowl of all sorts. (Press Pros Feature Photos)