Covington and Miami East have had some memorable battles over the years in a rivalry that dates back to 1959 and Friday’s 19-17 come-from-behind win by the Buccaneers ranks up there with the best games in the history between the two programs.

COVINGTON – If anyone wonders what type of kids the Covington and Miami East communities have, all they had to do was witness the final 50 seconds of an epic rivalry battle Friday night.

After a brutally physical, back-and-forth battle where Covington had basically sealed the contest with an interception by Andrew Cates, the Buccaneers took a knee with 54 seconds left. With one final snap still needed to be executed, players on both teams hugged each other in mutual respect and congratulations for a hard-fought battle.

The officials had to separate the kids on each team so the final snap and knee could take place.

“That says a lot about the kids on both teams,” said Covington coach Tyler Cates, who was soaking wet from an ice bath shower from his players. “They’ve competed against each other in several sports and are friends off the field. There’s a lot of respect between the two programs.”

Two programs who have played some doozies over the years, many of which Miami East coach Max Current has been involved in as a player and a coach.

There’s the 1980 season where the two teams played to a 7-7 tie in the final week of the regular season before Covington went on to the State Semifinals.

There was the 1985 slugfest where Covington held on for a 19-14 win over a Viking team that entered the game as heavy underdogs.

The 2008 contest where Miami East defeated Covington for the first time in 11 years on their way to the first of three CCC titles since joining the league in 2006.

Then there was the 2010 marathon that went into overtime before Covington won 40-34 on a 20-yard run by Jake Stewart in a contest that ultimately decided the league title.

More recently, the 2015 overtime affair where Covington blocked a Viking extra point in overtime to escape with a 21-20 win and force a share of the CCC title between the two teams.

And this one ranks up there with the best of them as the outcome was in doubt until Andrew Cates picked off a Viking pass and returned it to the Miami East 21 with 54 seconds left.

“That was just a really good football game between two good football teams,” said Miami East coach Max Current. “I’ve been in a lot of those over the years against these guys (Covington). Unfortunately, we just came out on the short end of the stick tonight.”

For Covington, a team that opened the season with three tough losses, the 19-17 win was as sweet as any victory the Buccaneers have had in years.

“It’s one of the greatest victories I’ve had because of all of the adversity we’ve faced this year,” said Cates. “I know there are a lot of doubters out there, but wins like this one makes it all worth it.”

Max Current isn’t one who ever doubted how good Covington is.

“Everyone looks at Covington’s record and says they are down this year, but that’s the furthest from the truth,” Current said. “They just happen to open up against three bears (St. Henry, Minster and Fort Loramie). Covington’s a good football team who is well coached.”

The reality is – BOTH Miami East and Covington are good football teams who are well coached.

Which made for an epic battle that was scoreless after one quarter of play and didn’t see any points until a freakish play with 1:46 left in the half. 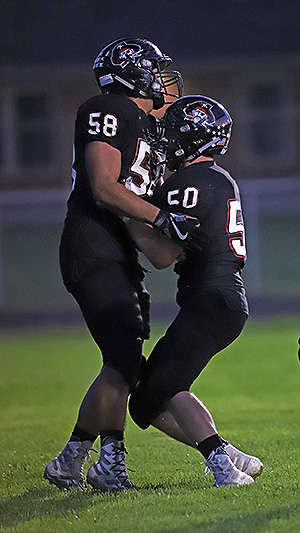 Buccaneer lineman Jesse Fisher #58 celebrates with Ian Wilson #50 after advancing a Covington fumble for the first touchdown of the game.

That’s when Covington lineman Jesse Fisher scooped up a fumble by teammate Duncan Cooper and ran it in from three yards out for a 6-0 lead as the point-after attempt failed.

But Miami East has a potent offense that can break a game open at any time.

And despite being held in check over the majority of the first half, the Vikings did just that as quarterback Ian Gengler connected twice with Justin Brown to move the ball to the Buccaneer five. Vincent Villella did the rest by powering his way in a couple of plays later to give Miami East a 7-6 lead as the extra point attempt by Wes Sutherly flew down the middle of the uprights with 16 seconds left in the half.

Covington then gave Miami East a gift as it fumbled on the first play of the ensuing possession, which allowed the Vikings to attempt a long filed goal with 0.4 seconds left on the clock.

Fortunately for Covington, the field goal was short as the two teams went into the locker room with the Vikings holding a slim 7-6 lead.

Miami East had three opportunities in the red zone in the third quarter, but was only able to turn the chances into three points on a 25-yard field goal by Sutherly on the final play of the quarter.

The other two red zone threats ended in a missed field goal and a turnover on downs thanks to a huge sack by Covington’s Parker Dysinger.

“We had our chances three or four times down there (inside the red zone),” Current explained. “We missed a couple of field goals we probably should have made and then the long one there at the end of the half. They stopped us there inside the ten as well. We needed to punch it in when we got down there and didn’t do it.”

Missed opportunities in the red zone would ultimately come back to bite Miami East as Covington managed to get its ground game going.

First, behind a 12-play 61-yard drive, the Buccaneers took a 13-10 lead on a 10-yard run by sophomore Duncan Cooper and the extra point kick by Brayden Wiggins.

But Miami East struck quickly as Gengler connected with Brown for 52 yards to the Buccaneer one on the first play of the ensuing possession and then Brown finished off the 15-second drive with a one-yard run to give the Vikings the lead right back at 17-13 with 6:31 left in the game. 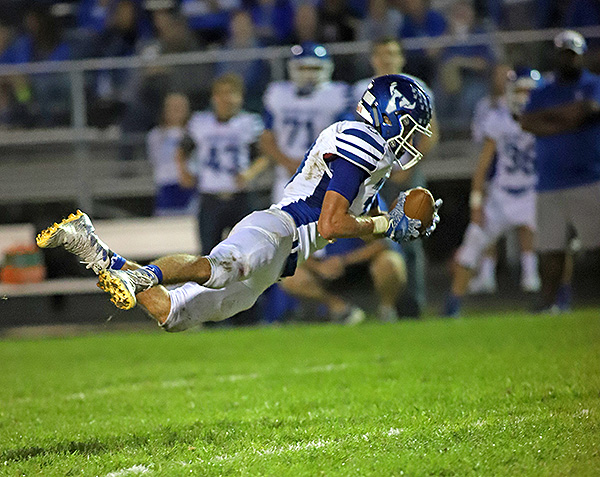 Justin Brown accounted for 144 of the 261 yards of offense for Miami East, 118 of those coming on five catches.

Covington, who originally hoped to use the passing game to get the ball into the hands of its skill players in space, elected to go to the ground-and-pound approach in hopes of a comeback win.

And the strategy worked to perfection after Duncan Cooper returned the ensuing kickoff to the Buccaneer 49.

“We came into the game thinking we needed to spread them out to get our athletes in space so they could make plays,” Cates explained. “But as the game went on we started to take over the line of scrimmage, so we went with what was there. That’s a credit to our guys up front because that’s a tall task to move the ball like we did against those monsters they (Miami East) had up front.”

Methodically Covington moved the ball down the field with the power running game behind linemen Ian Wilson, Grant Babylon, Gavin McReynolds, Eli Gerling and Jesse Fisher. It took 4:16, but Covington was able to move the ball to the 14 and then hit pay dirt on a fourth-and-four pass attempt from Cade Schmelzer to Andrew Cates.

The kick for the extra point was blocked, which made the score 19-17 in favor of the home Buccaneers with 2:15 left on the clock.

And 2:15 can seem like eternity with a potent offense like Miami East, but fortunately Covington has a player who has a knack for making big defensive plays at the right time.

And that player is senior Parker Dysinger, who recorded a huge quarterback sack on second down to move the Vikings back to a third-and-21 situation.

Then, on the very next play, Dysinger got into the face of the Viking quarterback to force an underthrown ball that was intercepted by Cates to virtually end matters with 54 seconds left on the clock.

“I can’t say enough about that kid,” praised Cates of Dysinger. “He’s one of the hardest working kids I’ve ever been around. He always comes up at the big moments. He plays so danged hard all of the time. He’s the definition of Covington – blue collar, good kid who works hard.”

After a pair of knees, the Buccaneers celebrated by giving Coach Cates an ice bucket bath on the sideline before heading to the locker room to share in the moment as a team.

“Our program took so many steps forward tonight,” Cates summarized. “I’m so proud of these seniors because they’ve been told for a long team that they weren’t very good. They worked very hard and deserved this win. We grew up a lot tonight as a football team.”

And it took an epic battle against a very talented Miami East team to show that growth. 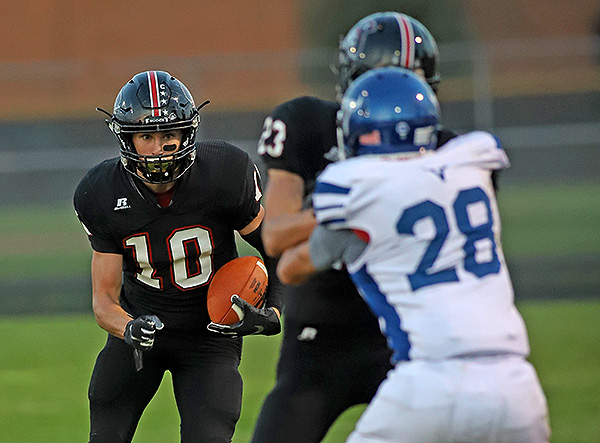 Andrew Cates follows the block from Kleyton Maschino on one of his seven catches on the night. 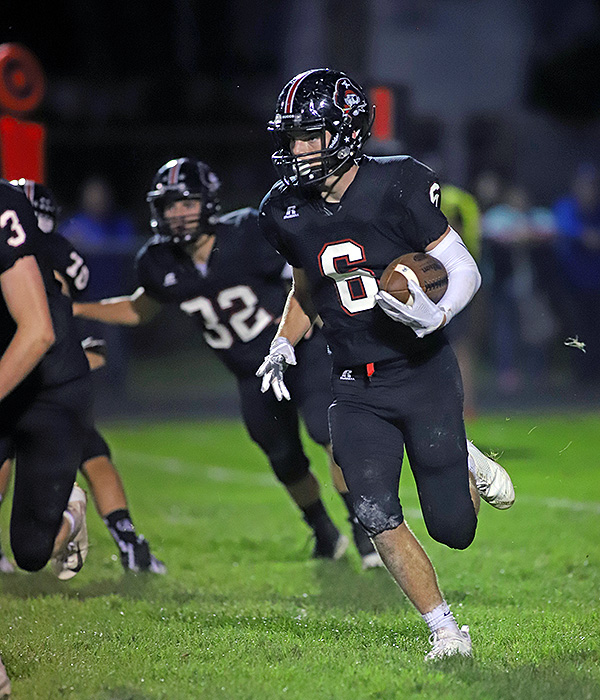 Covington sophomore Duncan Cooper and the rest of the Buccaneers used the power running game to knock off a senior laden Miami East team 19-17 in what was a thrilling back-and-forth contest on Smith Field. (Photos by Donny Selanders)