St. Henry started fast, but the defending champion Marion Local Flyers made the necessary halftime adjustments, showed their own run game, and turned the tables for a 28-7 win.

St. Henry – It’s cliche’, of course, so mention that a contest was a tale of two halves.  It’s been said, and written, so much as to make you throw up.  Gotta’ be something more original, you’d think.

But actually, no, relative to Marion Local’s 28-7 win Friday over St. Henry (4-2).  For you see St. Henry started fast, determined to pound their running game down the throats of the defending champs…and did for a time.

On the fourth play of the game senior Zach Niekamp busted through the middle of the Marion defensive front and sprinted 53 yards for the opening score.

And more, Niekamp kept running – 14 times in the first half for 144 yards.

But Marion answered at the 3:02 mark of the first quarter when flanker Matt Rethman ran it in from 23 yards out to tie the score at 7-7.

From that point on the first half was an exchange of punts and possession.  St. Henry got yards, but no points.  Marion seemed to get frustrated for the fact of a lack of execution.

“You’ll see a different Marion team in the second half,”  someone on the sideline mentioned.  He was right!

Marion Local has a run game of their own.  They always have had, and they came out showing a one-two punch of Nolan Habodasz and Brandon Fleck.  Five yards here, eight yards there, the Flyers steadily moved the ball down field after receiving the second half kick – Rethman running it in from 17 yards out for this second score of the game.  And when St. Henry jumped offsides on the point after attempt, Tim Goodwin pulled the kicker off the field and went for the two-point conversion.  Nick Tangeman made a leaping catch in the end zone to give the Flyers a 15-7 lead. 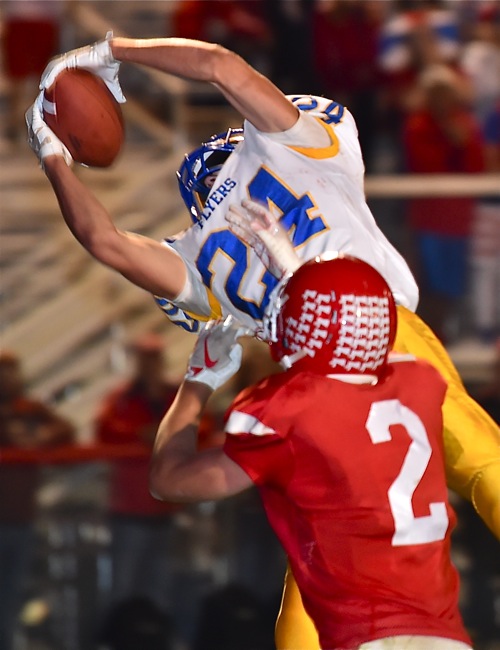 Tangeman had a relatively quiet night, at least for the first half.  And credit St. Henry defensive back Jay Knapke for keeping the 6’4″ senior in check.

But on Marion ‘s first possession of the fourth quarter the Flyers’ receiver got a step on Knapke in the end zone and hauled in a 17-yard catch for another score at the 10:20 mark – a twisting, turning catch in which he actually reached behind his head to get his hands on the ball.  That made the score 22-7 and a sense of foreboding began to settle on the St. Henry bench.  You just don’t spot Marion that many points and make a comeback.  At least, not often.

“They made the adjustments, they executed, and we didn’t,”  added St. Henry coach Brad Luthman.

And four minutes later, after an exchange of possession on downs, Marion’s run game rang the bell again.  Habodasz got to the corner, turned upfield, and outran St. Henry’s secondary for a 24-yard score to make the deficit 28-7.  That was the end of the scoring;  and all that was left were the explanations.

“We were horrible in the first half,”  said Goodwin, asked to explain the turnaround.  “Our offensive line was horrible.  I can understand the defense giving up yards because we have freshmen and sophomores playing out there.  But our offensive line has seniors and there’s no excuse for that. 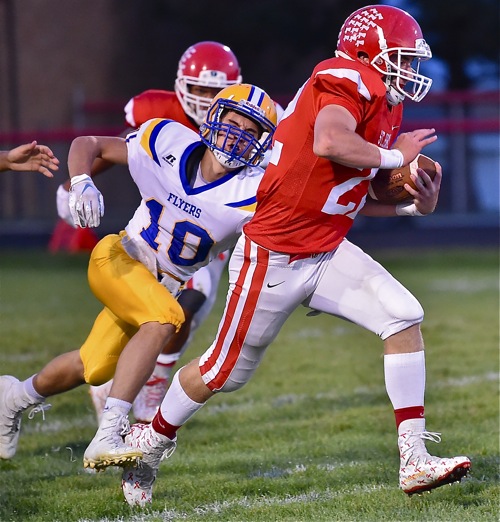 Zach Niekamp busts past Marion’s Matt Rethman for 53 yards and a touchdown on the game’s fourth play.

“In the second half we executed better because the line played better.  We got some matchups we liked and our running game responded.”

On the other side of the field a disappointed Brad Luthman was short and to the point.  He usually is, one way or the other.

“And the best player on the field, #24 (Nick Tangeman), showed up and made plays.  Hats off to him.  We had some success in the first half, but they’re a proud and historic program, they made their adjustments at halftime, and we didn’t.  We just didn’t  come out in the second half and execute.”

A tale of two halves, certainly, and it shows in the numbers.  Marion had 233 total yards for the game, and 167 of them were running yards…principally in the second half – Habodasz, Fleck, and Matt Rethman.  Quarterback Nate Bruns did throw the ball sparingly (13 times), and completed 8 for 66 yards.

For St. Henry, the indefatigable Zach Niekamp ended up with 24 carries for 178 yards, and that one touchdown, but the second half was an entirely different game.  After 144 yards in the first 24 minutes, Marion’s defense held him to just 34 yards after halftime.

The irony of Friday’s win?  St. Henry gave the champs their best shot – Niekamp behind that big offensive line – but could only cash in once while Marion figured it out.  Once they did…they responded in kind, proving, as Brad Luthman said, that you’d better beat a proud, historic program while you’ve got ’em on the ropes.

They have a habit of answering, you know, if you don’t. 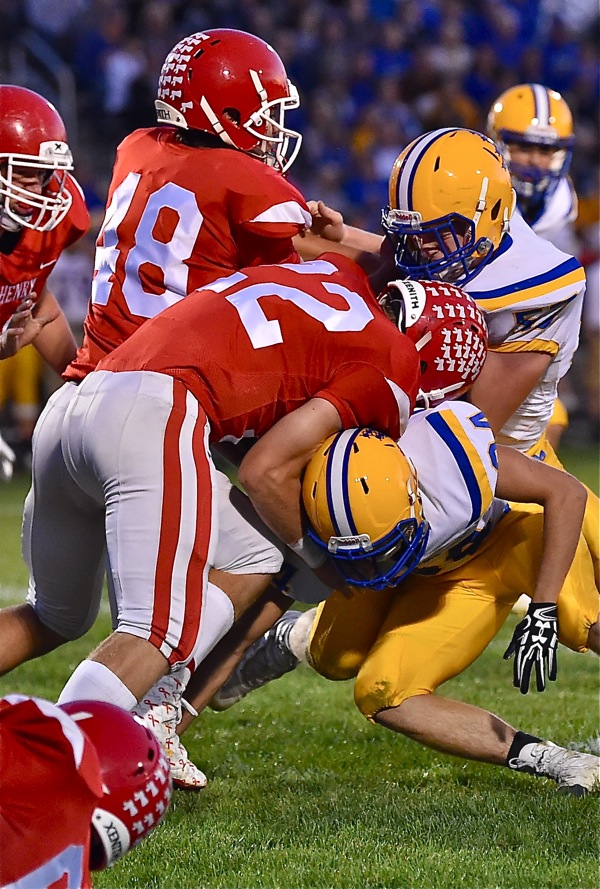 St. Henry's Zach Niekamp (#22) had 144 yards in the first half, but Marion's defense (above) proved much tougher to run on after halftime. (Press Pros Feature Photos)