Trojans Fall From Ranks Of The Unbeaten…To Miamisburg

Troy’s offense sputtered, a horrible first half put them in a hole, and Miamisburg proved to be their match defensively.  The net result…the Trojans suffered their first loss of the season Friday to the Vikings.

Troy – Coaches don’t often make such predictions. But standing on the 50-yard of Memorial Stadium following his team’s 31-14 victory over Troy, Miamisburg’s Steve Channell predicted an undefeated season the rest of the way.

No, not for his Vikings. For the Trojans.

“They’re not going to lose another game. You can print that,” Channel said looking across the field at the team he’d just knocked from the ranks of the unbeaten.

“He told me that, too,” Troy coach Matt Burgbacher said. “We go week by week. We knew Miamisburg was good. That was probably the best defense Miamisburg has had in the four years I’ve been here. They were physical. They were good. And offensively, not too shabby.”

Troy (4-1) and Miamisburg (5-0) came into the game with the Greater Western Ohio Conference’s top two defenses. Troy was allowing 158 yards per game. Miamisburg was surrendering 178.

As it turned out, the Vikings’ offense wasn’t too bad either. Miamisburg took a 3-0 lead on a 33-yard field goal three minutes into the second quarter. The Vikings appeared ready to take a 10-0 lead into halftime when quarterback Tate Vongsy hit Zion Lewis for a 15-yard touchdown pass with 3:44 remaining.

Miamisburg got the ball back moments later when a pass over the middle ricocheted off the Troy receiver’s hands and right to Miamisburg’s Jamahl Evans near midfield. He sprinted to Troy’s 12-yard line, setting up Vongsy’s two-yard run two minutes before the half. Miamisburg led 17-0 on a defense that hadn’t allowed more than 14 points in a game this season.

Miamisburg also had a 47-yard touchdown pass late in the first quarter called back on an ineligible receiver down field. 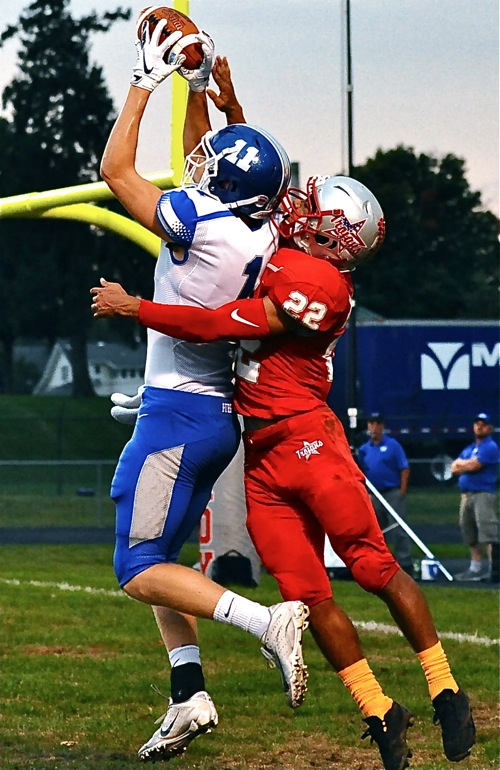 Troy’s Kobe Feltner (#22) knocks away a potential touchdown pass to Miamisburg’s Drew Barry in the first half.

While Miamisburg was taking advantage of opportunities, Troy was struggling to sustain drives and managed just 62 yards in the first half. The Trojans drove to Miamisburg’s 45-yard line late in the second quarter, but quarterback Brayden Siler was sacked to end the half.

Troy rallied in the fourth quarter with a pair of touchdowns. Troy pulled to 17-7 when Siler hit Kobe Feltner in stride down the middle. Feltner, sandwiched by a pair of Miamisburg defenders, sprinted near the goal line before getting crunched. He stayed on his feet and plowed into the end zone.

After Miamisburg answered with a Lewis two-yard run two minutes later to go back up 24-7, Troy running back Jaydon Culp-Bishop finally found some running room for a 23-yard touchdown. Troy trailed 24-14 with 7:45 left and attempted an on-sides kick. The ball didn’t travel the required 10 yards to set the Vikings up near midfield.

“We had some self-inflicted wounds,” Burgbacher said. “We did some things we haven’t seen from our kids this year. But my biggest takeaway from this game is my kids didn’t give up.”

Miamisburg’s run-controlled offense ran the clock down to 1:30 left in the game before Vongsy went around the right end for a touchdown and 31-14 final.

“We didn’t respond very well in the first half. We were uptight,” Burgbacher said. “We settled down at halftime and played them even. That’s what we thought it would be. They’re a good football team, no doubt.”

Troy beat Miamisburg 31-21 last season for the Trojans first victory in the series since 2011. Prior to that the Vikings had run off six straight wins, including a playoff victory in 2016.

“All in all, 31-14 on the road against a 4-0 team that’s a good team … we’ll take it,” said Channell, who was concerned his team would suffer an emotional letdown following last week’s 30-13 victory against Wayne.

“I thought our kids played gritty like we always do. We don’t have any superstars. We just have a bunch of kids that get along with each other, play as a team and work hard.”

As for Troy, Burgbacher expects his team to be fired up to start defense of its Greater Western Ohio Conference American North division title. Troy, which has won the last two division championships, hosts Tippecanoe next Friday. 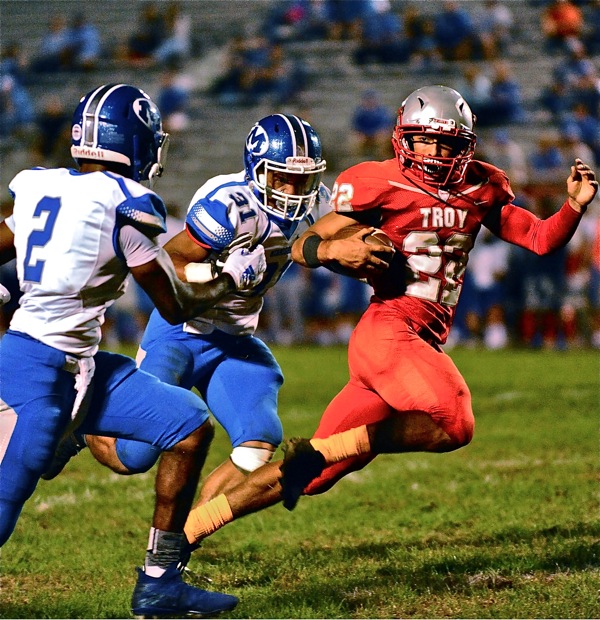