St. Henry’s defense puts a stranglehold on New Bremen and bounces back from a heart-breaking loss.  Redskins return to winning form, 36-0.

Throw on 242 yards rushing on 57 carries offensively, and you get a recipe for the old-school version of a football blowout. St. Henry smoked New Bremen, 36-0, with some classical smash-mouth football.

This, fresh off a devastating 28-27 loss to Anna last week for the Redskins.

“We had a lot of pain after last week’s loss,” St. Henry coach Brad Luthman said. “It’s been a really good win to get because this isn’t a chopped-liver New Bremen team, these guys are going in the right direction.”

Pound the ball with a workhorse running back, stem off with an occasional play-action, avoid turnovers and allow your defense to get you the ball back. Eventually the team opposite wears down and you break off longer plays. That’s the recipe for a win in old-school football.

St. Henry had all the right ingredients for such a dish. The defense pitched a shutout, the offense had no turnovers and two touchdown passes off play actions.

And when it comes to workhorse running backs, senior Zack Niekamp is one of the best in the conference. He smashed forward 29 times and gained 162 yards with three scores. That’s with a third quarter exit. 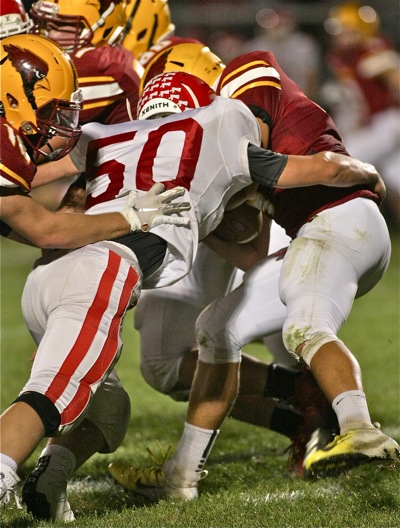 “Zack Niekamp’s just been a great surprise,” Luthman said. “When he wanted to move to tailback my question was whether he was gonna lower the shoulder and drop the boom, and he seems to do that. He’s come up with some big runs.”

New Bremen junior quarterback Nolan Bornhorst hurled his first passing attempt a long way down the middle of the field in the first quarter, over the head of his receivers and into the waiting arms of senior St. Henry defensive back Sam Lefeld.

That’s a good way to describe the Cardinals’ offense Friday night, desperately resorting to a pass. It took until there was less than three minutes left in the first half for New Bremen to have a positive rushing total, finishing the opening 24 minutes with four yards on the ground.

St. Henry showed the difference between the two squads by giving the ball to Niekamp three straight plays for fourteen yards its next drive, setting up a 24-yard touchdown pass on play action from Lefeld (he plays quarterback too) to senior receiver Jay Knapke. After a missed PAT it was 6-0 New Bremen at the 3:13 mark of quarter one.

The defense came back out and forced a punt, and the Redskins demoralized New Bremen on a 15-play, 84-yard scoring drive that included 13 runs and three third-down conversions. Niekamp plunged ahead for a one-yard score and St. Henry went up 13-0 with under six minutes left in the first half.

New Bremen’s best opportunity for points came shortly thereafter, moving the ball downfield on a few crisp passes by Bornhorst. That drive crossed midfield (the only one that did) and stalled out thanks to a sack from blitzing Redskins linebacker Devin Siefring. 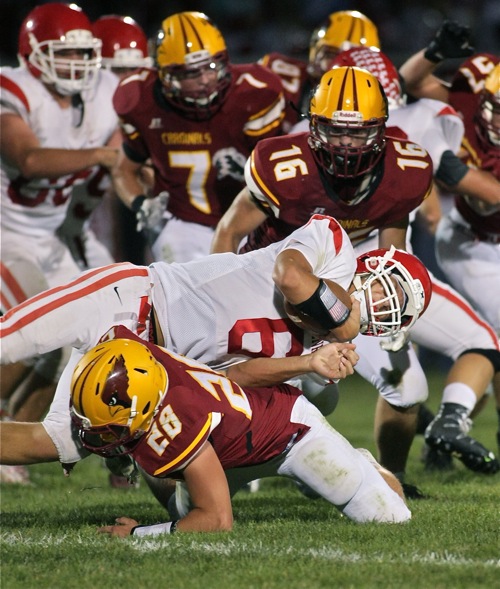 Redskin quarterback Sam Lefeld gets cut down on a fine defensive play by Zach Bertke.

“Our pride got hurt last week. We gave up a lot of rushing yards to a pretty good Anna team,” Luthman said. “[The defense] rose to the challenge [this week].”

New Bremen took the third quarter kick, and on its first play from scrimmage tossed a pass through the arms of senior receiver Bryce Blickle and into those of Lefeld, his second interception.

After that, the Cardinals were cooked.

A three-and-out gave the ball back to St. Henry once again. They drove into the redzone before a quick stand from New Bremen brought it to fourth and three at the 18-yard-line. But the energy simply wasn’t there anymore. Niekamp took a handoff up the middle, brushed off two defenders, and dashed 18 yards to the endzone for a 27-0 St. Henry lead.

Another New Bremen play meant another turnover, a fumble recovered by none other than Lefeld at the Cardinal 21-yard-line. The play action remained set-up perfectly by the previous drive, and a 21-yard touchdown bomb to senior Jared Fishbaugh took the score to 34-0 and started a running clock.

Unlike last week, St. Henry didn’t turn the ball over given opportunities to seal the deal.

“Our challenge to [the team] was play a clean football game,” Luthman said. “When we turn the ball over we’re just not the kind of explosive [offense] that’s gonna comeback from that.”

One last turnover a few minutes later, a snap over Bornhorst’s head resulting in a safety took the score to its final 36-0. St. Henry wound the entire fourth quarter down in a singular drive.

Now that is how you bounce back from a heart-breaker. 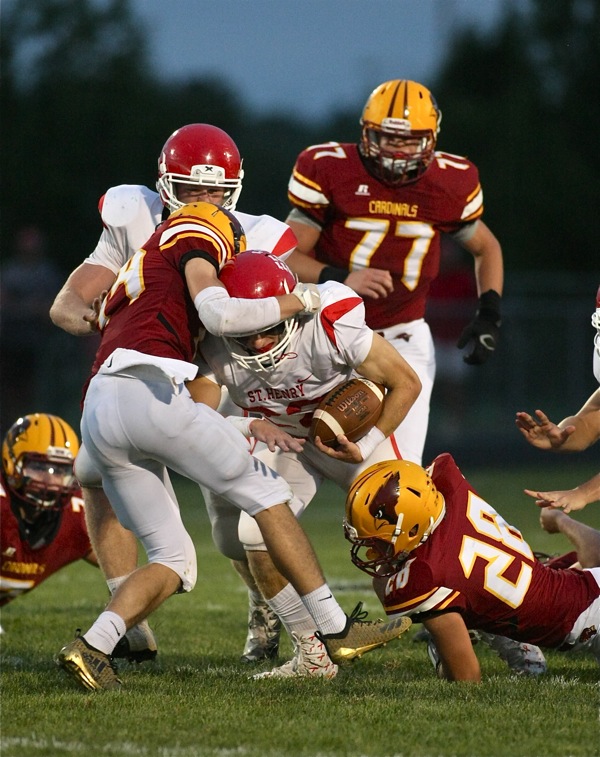 He lowered his shoulder, and boom...St. Henry's Zach Niekamp crashes through a pair of Cardinal tacklers for yardage in Friday's shutout win. (Press Pros Feature Photos by Don Selanders)