McCoy: Flyers Figure Out The Option, Double Up Davidson…

It took them a quarter to figure things out, but when they did Dayton overcame a 14-point deficit, scored 42 straight points, and evened their record at 2-2 at the expense of high-powered Davidson.

Oh, really? Ask Division III Guilford College about that because the Quakers scored 61 points against Davidson College and lost, 91-61.

New Davidson coach Scott Abell, who runs what he calls the spread option, a high-octaine triple option, was asked if his team might score 106 points in its next game against the University of Dayton Flyers, which would eclipse the all-time single game FCS scoring record of 105, set by Portland State in 1980 against Delaware State.

“Absolutely not,” he said, obviously already a master of ‘coachspeak’. “Listen, our goal will simply be to score one more point than our opposition.”

Davidson, though, put on a stunning start Saturday afternoon at Welcome Stadium, acting as if they brought their own footballs and they weren’t going to share.

Before the Flyers got their jerseys dirty, they were down 14-0 by the end of the first quarter. Davidson had run 26 plays and Dayton had run five.

Davidson could have scrambled into their bus and headed home after their first-quarter song and dance. The Flyers hitched up their britches and did what they needed to do. 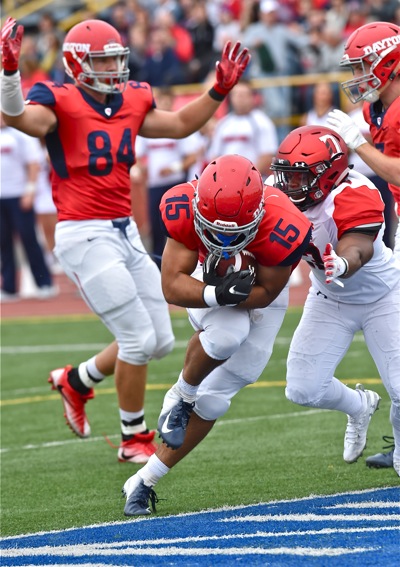 Richie Warfield got the Flyers on the board with this second quarter touchdown.

They reversed the trend beginning in the second half and played their own version keep away and scored 42 unanswered points. By the time Davidson scored again, it was against Dayton’s second-line defense and the final score was 42-21.

“You can practice against that offense as much as you want, but it is not the same speed,” Chamberlin said of Davidson’s offense. “Until you get in there and get a feel for it, and that’s exactly what happened. And their defense is much better than it has been. They rose to the occasion and were stopping us early.”

And Abell is a riverboat gambler with a whistle around his neck.

On Davidson’s first drive running back Wesley Dugger carried the ball eight times, punching out three and four yards at a time. Then it was 4th-and-2 at the Dayton 48. Punt? No way. No how. No chance.

Quarterback Tyler Phelps faked to Dugger, straightened up and threw a pass over a vacant lot to tight end Zach Hester, a 48-yard touchdown. It was a 10-play, 84-yard trip.

Dayton had the ball for four plays and had to punt and Davidson used the same modus operandi — hoard and hide.

This time, again punished the Flyers with Dugger, a 205-pounder, they traveled 87 yards in 16 plays. Dugger carried eight times. The Flyers had them third-and-six and third-and-12 and fourth-and-one, but couldn’t stop them. On third-and-12 quarterback Tyler Phelps hit William Wicks with a 31-yard strike.

Duggar got two yards on a fourth-and-one at the Flyers 14, then crashed into the end zone from the two. 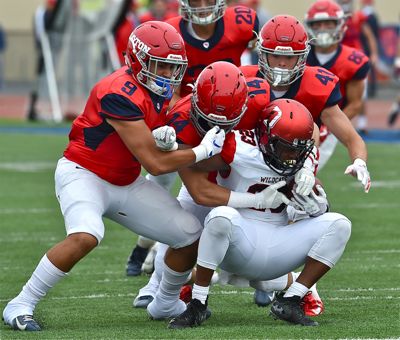 Quickly and stunningly, it was 14-0 late in the first quarter and the Flyers had run four plays from scrimmage.

On the sidelines, UD runningback Tucker Yinger was saying, “No, I don’t think we’re ever going to get the ball. They were taking up all the time and we were discussing that on the sidelines. We were saying, ‘We’re doing everything right, we just don’t have the ball.”

After watching Davidson play keep away, the Flyers turned the field upside down after that and it was UD playing hide-the-football. And Yinger was the main man to do it.

Like Dugger in the first quarter, Yinger became the ball controller. By game’s end, he carried 17 time for 80 yards and scored three touchdowns. Running back Richie Warfield scored the first two touchdowns to get the Flyers even at the half, 14-14.

After finally getting Davidson to punt early in the second quarter, the Flyers started at their 41 and Yinger ran for nine yards on the field play. Red-shirt quarterback Jack Cook, back to pass, didn’t spot a loose receiver, so he tucked-and-ran, 36 yards worth. The 59-yard four-play quick strike ended with red-shirt freshman Richie Warfield plowing over from the six and it was 14-7.

Abell’s casino-type approach backfield on Davidson’s next drive. He went for it on fourth-and-one on his own 38 and Dugger was piled on by half the Flyers defense for no gain.

A hold penalty backed the Flyers to the 44 and it was third-and-14 at the 42. Cook unleashed a deep pass that seemed doomed. It was a bit short and a couple of Davidson defenders had Matt Tunacliffe under wraps.

No problem for Tunacliffe. He turned his back on the end zone, came back toward the ball and leaped over the defenders to pull it in, a 41-yard completion to the three yard line.

Two plays later, Warfield lugged it home to tie the game with his second touchdown and a 14-14 tie with 6:22 left in the half.

Warfield, who plays behind Yinger, is The Red Zone Demon. When the Flyers are near the goal, he smells it like pizza fresh out of the oven. In the first four games he has carried the ball only 24 times, but he has five touchdowns. And he has caught only two passes this year, both for touchdowns.

“We got into a nice rhythm after falling behind, 14-0,” said Chamberlin. “That was good that we got the score tied in the first half. If we had gone in behind, it might have been a little different.”

The Flyers put their foot on Davidson’s exposed necks quickly and often in the third quarter, a 21-0 burst that put the game away. 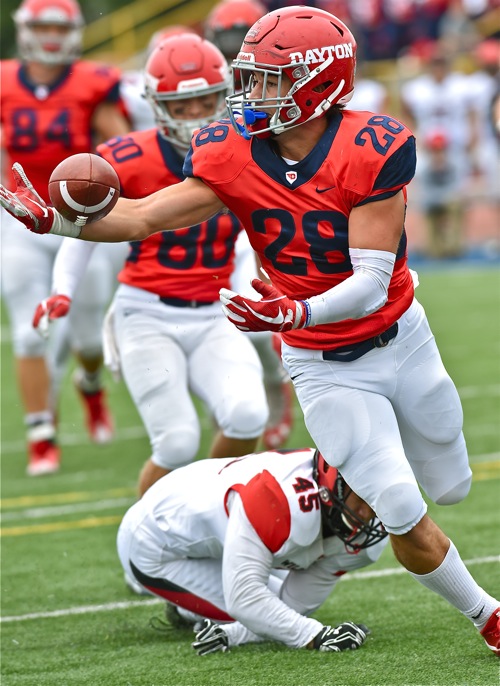 Dayton’s Tucker Yinger lost control of the ball at the five yard line, but somehow got across the goal line with it for a third quarter touchdown.

They took the second half kickoff and covered 65 yards in seven plays. A third-and-four 14-yard Cook-to-Ryan Skibinski kept it moving until Yinger scored from 13 yards out to give UD its first and lasting lead.

Yinger appeared to lose control of the football at the five and it rolled into the end zone, but it went undetected and went for a touchdown.

“Oh, I know,” he said. “I was pretty disappointed. The same thing happened last week (in a five-point loss to Duquesne). Fortunately, we got the touchdown this time. I got somebody looking after me. Thank God there is no replay.”

When the play began, Yinger started for one hole, then veered to his right after hesitating.

“There were flowing really hard on the line, doing it the entire game,” he said. “When I hesitated, I was just trying to set up a cutback.” His cutback was cut throat to Davidson.

The defense, now adjusted to Davidson’s pedal-to-the-metal style, forced an three-and-out after Yingling’s touchdown and the Flyers set sail from their 34. A 15-yard personal foul on an out-of-bounds shove against Davidson put the ball at the Wildcats’ 29.

But UD had a fourth-and-one at 20 that Warfield turned into a 12-yard sprint to the eight and Yinger took it in from the eight and it was 28-14 and Davidson’s spirit was flagging.

Their early enthusiasm dwindled to despair when they had to punt again and the Flyers took only three plays to go 65 yards, a 35-yard Cook completion to Tunncliffe and a 30-yard touchdown to Adam Trautman to make it 35-14 after three quarter and make the fourth quarter academic.

As usual, senior safety David Leisring was at the top of the tackle list with 12, eight unassisted, and made a one-handed interception late in the third quarter. 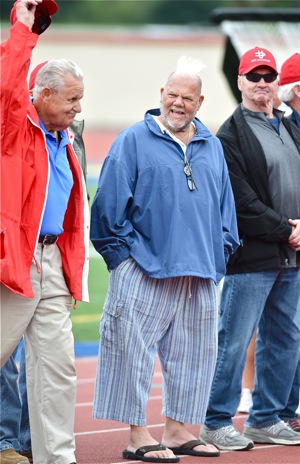 The Flyers welcomed back members of the 1968 team at halftime. Fashion was optional.

“They had us on the ropes their for a little bit,” said Leisbring. “I mean, they are a good team. They execute really well. With a triple option team, sometimes it takes awhile get comfortable. And they’re a pretty fast team.

“But even with the first quarter, we stuck with our game plan and knew what we had to do — let the nerves die down and execute.”

The second and third quarter execution came with everything but a scaffold and a hangman’s noose.

About Davidson scoring 91 in its previous game, Leisring said, “Credit to them. That’s exactly what that offense can produce. It can produce 91 points and that’s what I love about it. On defense, you have to be true to yourself, true to the guy next to you and if you don’t that is exactly what will happen. . .91 points.”

But not against the Flyers, not after the first quarter when UD decided to beat Davidson at its own game and declare that the football belonged to them.

“We were running the ball and controlling it and that’s what you have to do,” said Chamberlin. “You can’t put the ball in their hands or they’ll just take it down the field. And we came up some good plays. Our defense has been spotty the first three games, guys missing tackles, blown assignments. It is assignment football. And today we did it.”

Dave Arbogast is proud to sponsor coverage of UD basketball on PressProsMagazine.com 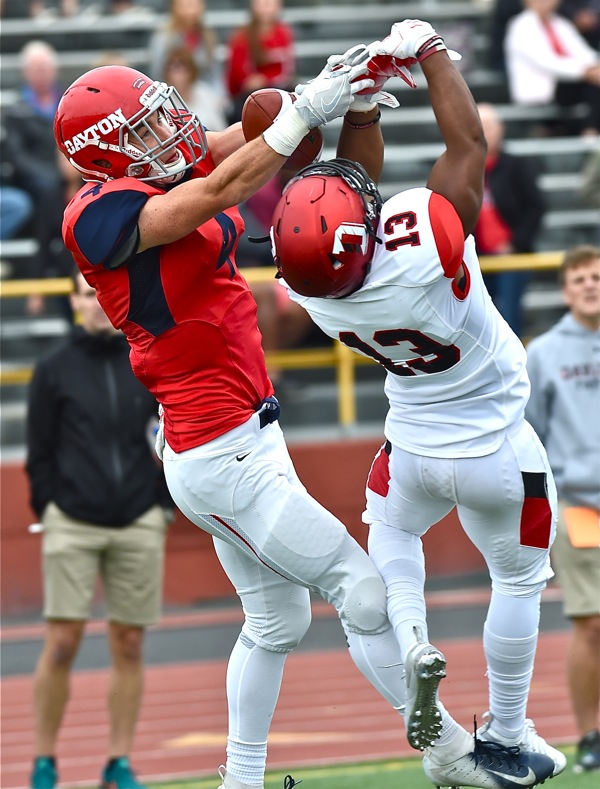