Marion Local rebounded on Saturday from back-to-back league losses to Versailles and St. Henry to put the Anna Rockets away in three sets.

Anna – Sometimes the best antidote is more of the same poison.

Such it was Saturday for the Marion Local Flyers, who dispatched a tough Shelby County League team, the Anna Rockets,  in non-league play in three sets, 25-9, 25-23, and 25-19. 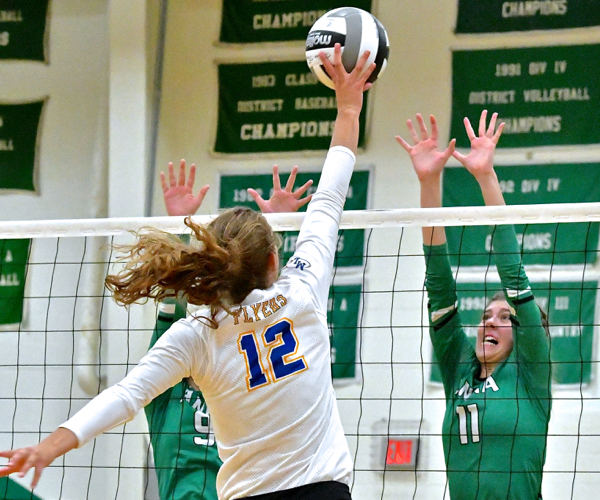 Flyer Grace Knapke controls the ball in this play against Rocket Macy Wiktorowski.

It erased, perhaps, the bad taste of disappointing league losses for the Flyers last week in successive fashion to Versailles and St. Henry. And for coach Erica Schulze, she was short and to the point with how they did it. 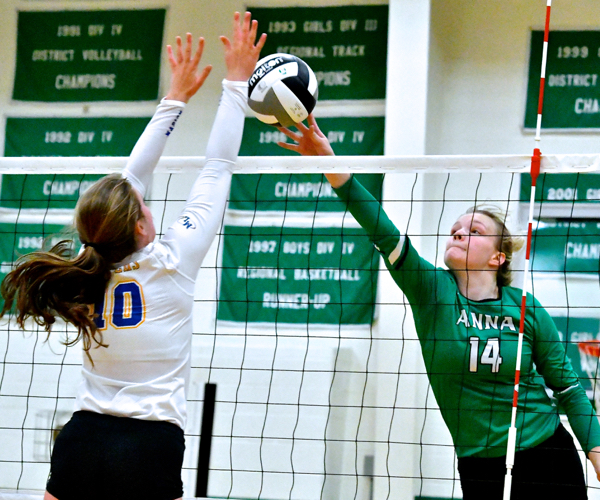 Emma Meyer of Anna attempts to dink the ball on Flyer Brooke Homan. 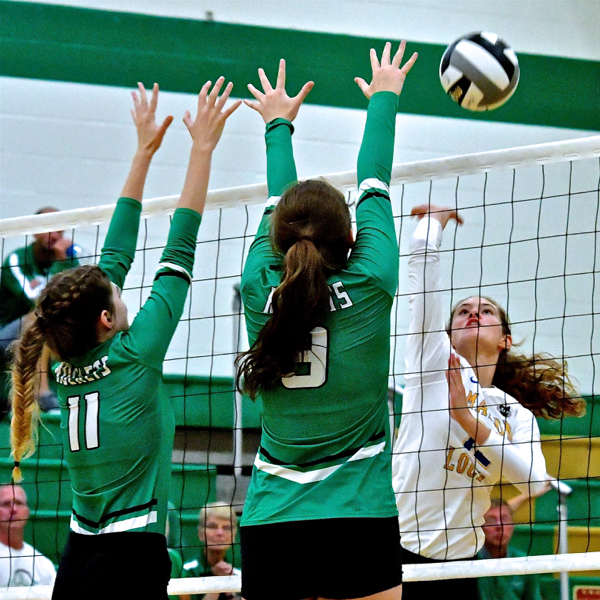 Flyer Grace Knapke ready to slam another one down on the Rockets.

“I was happy with how we played,” said Schulze. “We played well together, and for the most part they all stepped up and had a great game.”

Marion Local improves to 5-2 on the season. 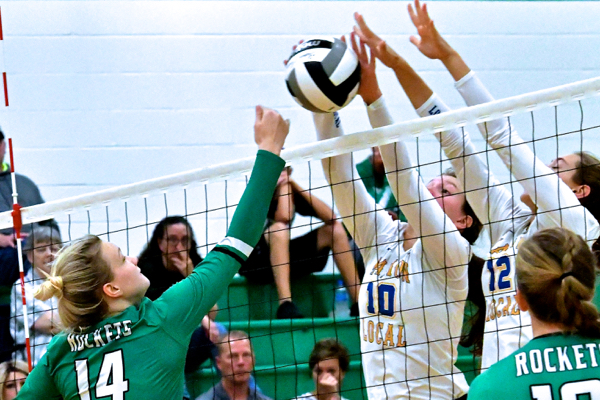 Anna’s Emma Meyer bumps one into the defensive blocks of Flyers Brooke Homan and Grace Knapke. 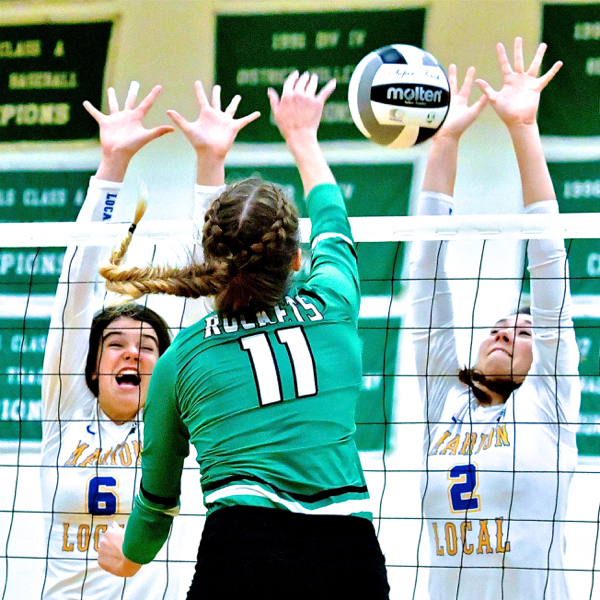 Anna’s Ava Rose got her turn at returning a few rockets at the Flyers.

For Anna, the Rockets drop to 7-4 on the season, but coach Kelli Zumberger saw positives in the way her team played a tough non-league opponent on a rainy Saturday.

“We struggled in the first set and the score kinda’ showed that,” she said. “But I thought we did a better job of coming out hungry in the second set and competing with them. I tell the girls it doesn’t matter who’s playing for us (injury-wise), we just have to come out and play volleyball. 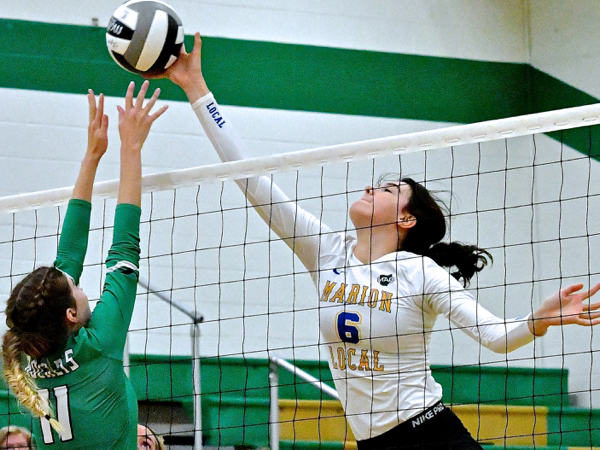 Alana Pohlman smacked one over on Anna’s Macy Wiktorowski. 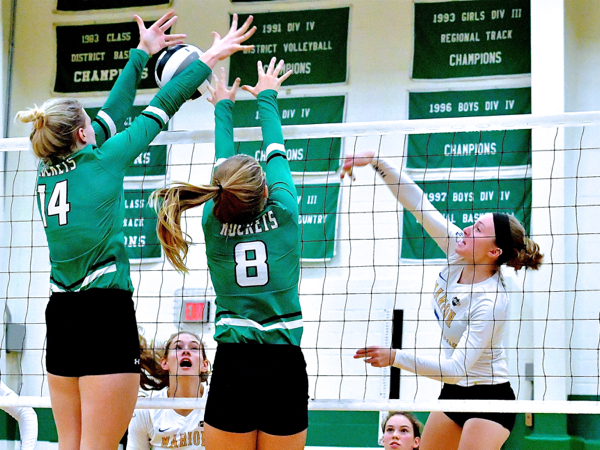 Flyer Carrie Fesenmyer (right) nails one over the net against Rockets Emma Meyer (#14) and Mary Landis (#8).

“Unfortunately, we made a lot of unforced errors in the first and third set, but it’s only a growing experience for us. We had some good play from Lindsey Barhorst on the back row today, but overall we just struggled today. Service and setting just wasn’t there.”

The Rockets, who are in the middle of the SCL league chase, will attempt to rebound themselves with a Tuesday date at home next against Fort Loramie.

For Marion, the Flyers get back into league play next Thursday with a road date at Parkway, then host Fort Loramie on Saturday. 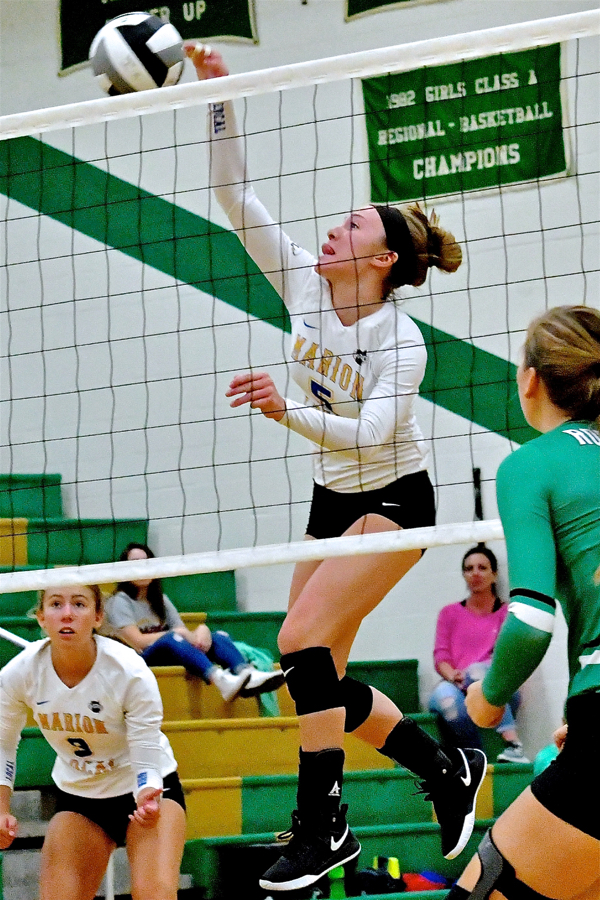 #5 Carrie Fesenmyer of Marion Local slams one down on the Anna Rockets. 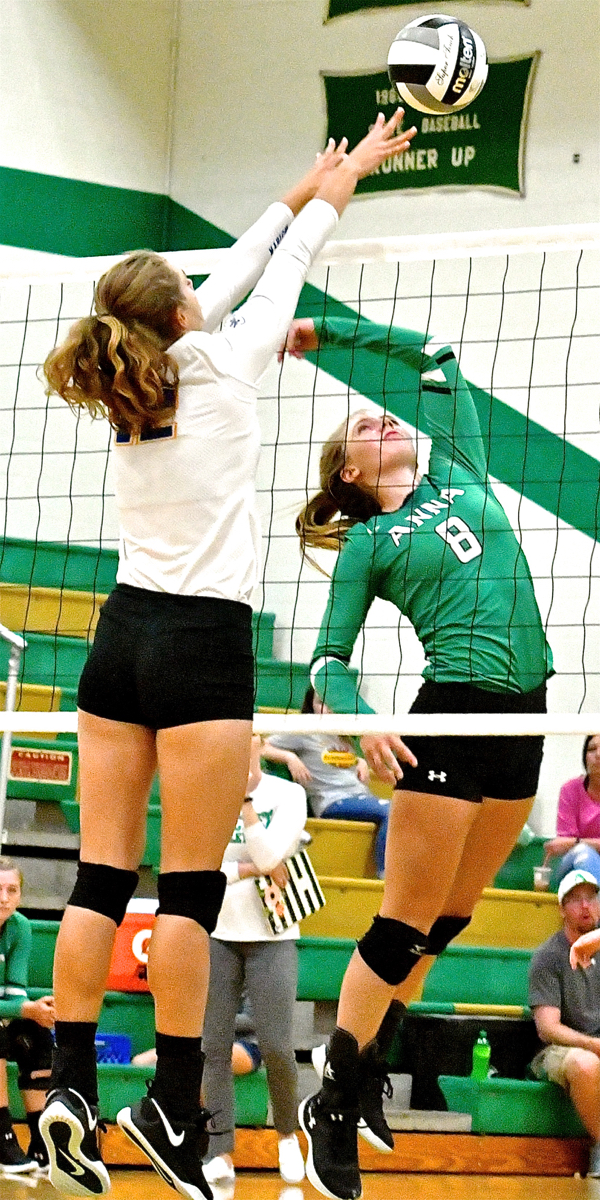