Anna Blows Out New Bremen, One Inch At A Time

Coaching, skill and most importantly luck were on the side of the Anna Rockets in Friday night’s MAC showdown. What was hyped as a classic battle turned into a 42-7 dismantling of the New Bremen Cardinals, one inch by inch.

Fine, it’s a cliche, but it rings true. Football is a game of inches.

Friday night, at least ahead of the game, there was a special feeling in the air around Cardinal Stadium in New Bremen, Ohio. Two TV stations, a radio crew and at least three different written outlets crowded into the press box. The stands were full of Cardinal hopefuls brimming with excitement.

All gathered got a first-hand experience in why that cliche rings true, because this 42-7 Anna Rockets blowout against the New Bremen Cardinals became a blowout due to, quite literally, a handful of inches. 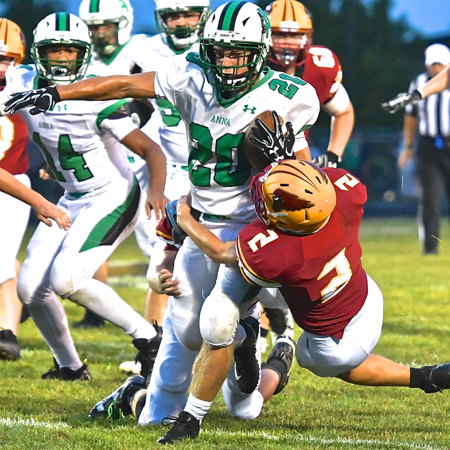 Riley Huelskamp blows through a Bremen tackler for extra yards.

Really the only player breaking the confines of this game played inches at a time was fleet-footed junior Anna quarterback Bart Bixler. On the night he rushed for over 130 yards.

“He’s getting better every week,” Marino said. “First year as the starter for the whole year. Definitely taking the reigns and doing well with that.”

Anna set the tone early. Two minutes after the opening kick, New Bremen had the ball with a fourth and one at its own 47. Coach Chris Schmidt rolled the dice and ran junior quarterback Nolan Bornhorst — from a shotgun. Senior rocket linebacker Luke Cantrell broke through the line and drug the 195-pound gunslinger to the grass inches short of the first down.

The next play junior Anna running back Riley Huelskamp took an outside handoff and had nowhere to run. Problem for the Cardinals was, Bixler still held the ball. He sprinted 47 yards untouched to the endzone for the game’s opening score.

New Bremen came right back out with 28-yard run of its own from senior Nicholas Wells, driving down inside the the Anna 45 before facing a fourth-and-two. The Cardinals let Wells take his shot at picking up the first down here, but again came up inches short. Anna responded in kind with a 12-play, 59-yard drive to drag the game into the second quarter and take a 14-0 lead. 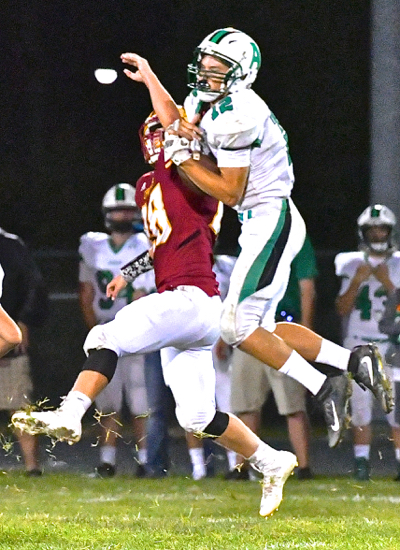 With under a minute to play in quarter number two Anna coach Nick Marino reached deep into his bag of tricks and pulled out a double pass. Junior wideout Jeffrey Richards took the long lateral and flung a dying duck down the field to an open Isaac Lininger for a 29-yard touchdown strike to make it 21-0 before the half.

“It was a nice play before the half there, it helped us spring the game open a little bit,” Marino said of the play design. “We executed really well too.”

None of that would have been possible if not for a play made all the way back at Anna’s own 22. On third-and-eleven Bixler rolled right and found no one open. Pump-faking and juking he dashed around New Bremen’s Wyatt Dicke before getting gang-tackled upfield near the first-down marker. It was a first down by the nose of the ball upon measurement.

As if all these within-inches plays didn’t already go the way of the Rockets in the first half, the Cardinals mounted one last drive, desperately wanting to make it a game before the teams hit the locker room. Bornhorst took a snap at the Anna 27 and hit senior receiver Grant Shelby streaking deep on a post route as time expired.

He was tackled a foot short of the goal line.

“There was some opportunities there in the first half,” Chris Schmidt said. “Just weren’t able to convert or capitalize.”

Down 21-0 and kicking back to the Rockets to start the third quarter with the football gods seeming to scheme against them, the wheels fell off the wagon for the New Bremen Cardinals. Bixler broke free again two plays after the third quarter kickoff, dashing 37 yards through the middle of the 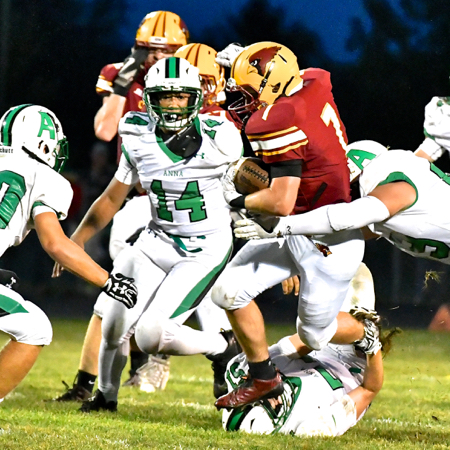 New Bremen’s Jestin Tenkman get some hard-earned yards against the Rockets.

defense to set-up a one-yard scoring run by Huelskamp.

Three plays after that Richards pick-sixed Bornhorst. 35-0 Anna. Running clock. All but ball game. After a quarter and a half with two touchdowns as formality, the final line read 42-7.

For Anna, a win like this sends a message to the rest of the MAC. One that says “look out.”

That’s all well and good, but the story of New Bremen in this game should remind the Rockets to stay humble. Because while this 42-7 smoking was a blowout in appearance, a couple inches go the other way, this is a much different ball game. Of course, Schmidt doesn’t see it that way.

“We got out-coached, we got out-played, there’s not a whole lot else to say other than that.” 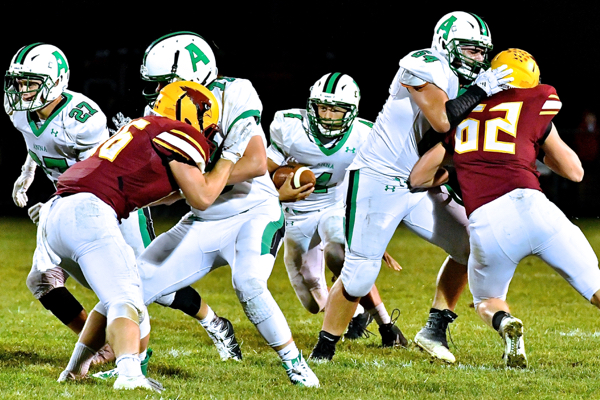 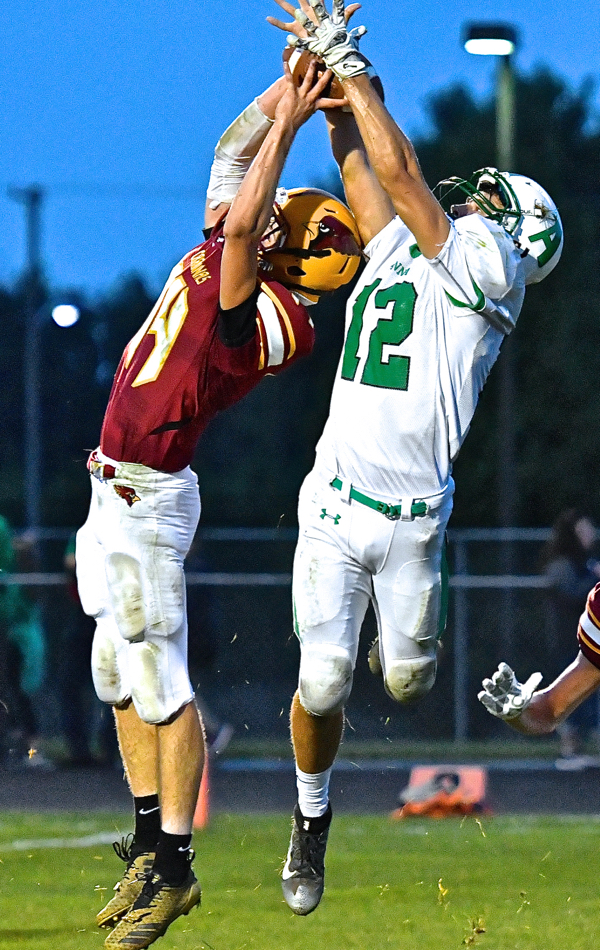