After Honoring Past, Troy Shows It Has A Bright Future, Too…

Jaydon Culp-Bishop powered Troy’s third win of the season as the Trojans topped Turpin on Hall of Fame Night at Memorial Stadium.

Troy – Prior to Troy’s football game Friday night, a trio of former Troy High School football greats – Dan Cox, Todd Denlinger and Jason Manson – once again made memories on Memorial Stadium’s turf. The three, along with Vickie Felver and Hildred Byrkett, were honored during Hall of Fame Night.

During the game, the current crop of potential Hall of Famers continued their bid to join the exclusive club someday.

“I’m trying. I’m trying,” senior running back Jaydon Culp-Bishop said, smiling at the thought. “We have a hall of fame coaching staff. It’s just exciting to see our players improve every week with their great coaching. Our team is just full of energy.”

Though he wasn’t alone, Culp-Bishop helped power Troy’s 29-7 victory over Cincinnati Turpin with 238 yards and two touchdowns on 37 rushes. He added a 75-yard touchdown off a free kick following a safety, the decisive score that put Troy up 16-7 to start the second quarter.

“I said, ‘Thank you. Thank you,’” Troy coach Matt Burgbacher said of Turpin kicking to Culp-Bishop. “We knew they were going to kick it deep to Jaydon or our other pretty good returner in Shane Shoop.  Everybody made a block and he shot through that hole.”

The game featured a pair of teams in Division II, Region 8. That put extra emphasis on a win and those coveted playoff computer points.

It didn’t take long for the Trojans – who currently sits atop the D-II, Region 8 rankings – to stake their claim to them.

Culp-Bishop’s one-yard touchdown on fourth down put Troy up 7-0. It capped Troy’s first drive and gave the Trojans (3-0) the lead just five minutes into the game.

Turpin (2-1) struck back with a 43-yard touchdown pass from quarterback Justin Silverstein to Logan Jilek, who sneaked behind the secondary and was all alone down the sideline.

But that’s all a Spartans team could manage after scoring 34 and 28 points in its first two wins to start the season. 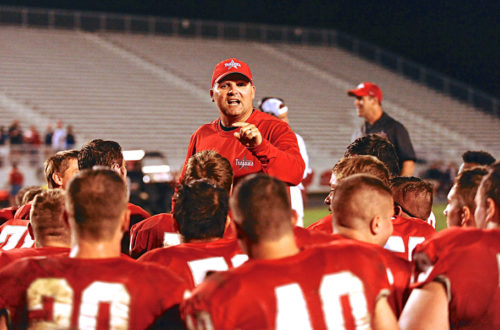 Troy’s Matt Burgbacher addresses his team…”Our kids just played hard.  This was a playoff game for us.  Our kids did a great job coming in focused.”

From there Troy’s offensive line – seniors Jesse Westmeyer, Nathan Garber and Marshall Brueckman, junior Riley Hubbard and sophomore Jakob Moorman – wore down the Spartans, especially in the second half.

“They played aggressively. They overpowered them,” Culp-Bishop said of the line. “Our mental toughness is great and I love it when our offensive line takes control of the opponent.”

Culp-Bishop had 85 yards in the first half. He rolled up 153 in the second half, including a touchdown run of 23 yards for the final score with 10:53 left in the game.

Culp-Bishop’s 75-yard return was set up after Adam Decerbo and Austan Good pressured Silverstein in the end zone. Silverstein, whose knee was already down, threw the ball away and was flagged for intentional grounding for the safety.

“Bunkers” is proud to sponsor coverage of GWOC Football on Press Pros Magazine.com.

Troy scored early in the third quarter on quarterback Brayden Siler’s 13-yard pass to Shane Shoop on a crossing route over the middle, putting Troy up 22-7.

Siler completed 10-of-14 passes to six different receivers for 149 yards and a touchdown.

“Our coaches were looking for a big play and I was there to make it,” Shoop said. “I’ve been harping on coach to give me the ball. Finally my time came and I stuck it in the end zone.”

Shoop’s two biggest sticks, though, came on defense in the third quarter.

The Spartans faced third-and-10 on the Trojans’ 34-yard line trailing 22-7. Shoop – who led Troy with 10 tackles – blasted up the middle and drove back Turpin running back Reece Evans for a one-yard loss. On fourth down, Shoop got into the backfield and tripped up Evans for another 1-yard loss and turnover on downs.

“Shane, he played one whale of a game tonight,” Burgbacher said. “That’s the defensive line’s job to take up those blockers so the linebackers can go free. I thought our defensive line did a great job.”

Troy held Turpin to 208 total yards. The Spartans, who had averaged 452 yards in its first two games, managed 126 yards rushing on 31 attempts and 82 yards passing.

Troy finished with 416 yards of offense, led by the ground game’s 267 yards on 50 carries.

“Our kids just played hard,” Burgbacher said. “That’s something about this group, they are so competitive. They give great effort. That’s gonna take you a long way in the season. … This was a playoff game for us. Our kids did a great job coming in focused.

“We tell the kids all the time invest in yourself, but it’s we over me. If we can make all 76 kids on our roster better people, wins are going to come. The kids have really bought into that.” 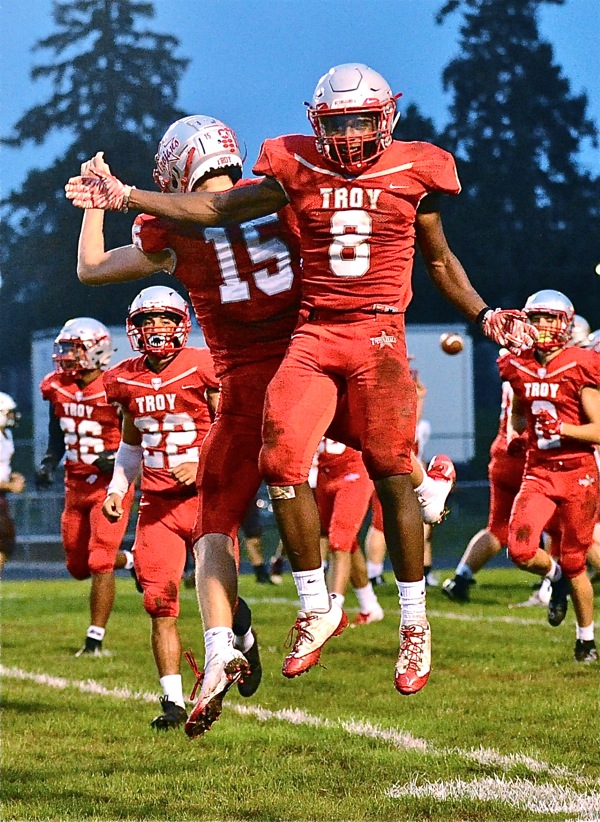