Their Saturday record continues to be a problem for the Division III defending champs.  Versailles drops a grueling five-set match to Fort Loramie as the Tigers continue to play with early inconsistencies.

Fort Loramie – Some will remember, perhaps, the old Bill Murray movie Groundhog Day, where the TV news reporter wakes up every day to the same narrative.  Well, Versailles volleyball coach Kenzie Bruggeman knows something about the script.

Bruggeman and the Tigers continued their own version of that story on Saturday afternoon as for the second time in as many weeks the Division III defending champs struggled to play with confidence, consistency, and that air of a champion…on Saturday!  Swept by Russia last Saturday, this time they came agonizing close against Fort Loramie before bowing in five sets…25-23, 21-25, 25-22, 14-25, and 12-15.

Versailles falls to 5-3 on the season, while Loramie, with the win, likewise improves its record to 5-3.

“It was a good win for our kids,”  said Redskins coach John Rodgers.  “We have a lot of inexperience on the floor, but we’re learning as we go.  I think the best thing to take away from today is that we went out and played hard on every point.  We talked about that before.  Just play hard on every single point and you’ll be surprised at the results.”

Versailles seemed to get off to a confident start, winning two of the first three sets as the match took on a very competitive personality with the former Division IV champions (2014).

But Loramie, a young and talented group “learning on the go”,  seized the momentum in the fourth set to set Versailles back, 25-14, setting up a dramatic conclusion in the fifth and deciding set.

“You know, I don’t think we should play on Saturdays anymore,”  cracked Bruggeman afterwards, moments after losing the excruciating fifth set.  “Saturday is just not our day.  Just a lot of miscommunication.  It was a mess on the court.  It seemed like we couldn’t tell left from right, let alone put something together to be a successful volleyball team.” 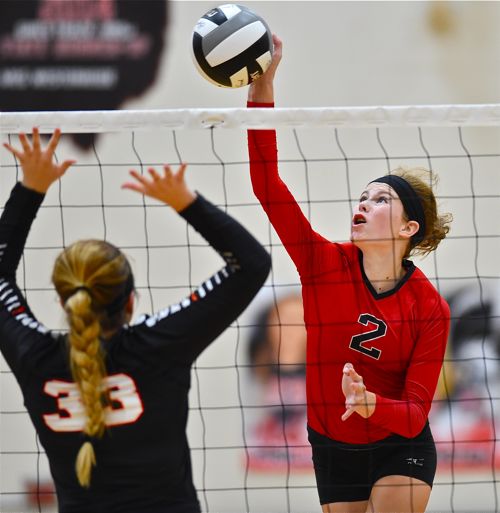 You could sense the frustration, just three days after the Tigers took down a very fine Marion Local team in five sets on Thursday – another highly competitive match in which the communication was obviously better, and the instinct for making big plays at big time was obviously present.  But on a Saturday…not so much.  But why?

“It’s the exact same story as last Saturday (against Russia),”  added Bruggeman.  “No communication whatsoever, and you cannot be successful if you’re not willing to put in that kind of work and effort.  Unfortunately, the biggest issue we have right now has nothing to do with high school volleyball, and it’s very hard for the girls learn.  But, we have to find a way to snap out of this because it’s the same thing we experienced last week (against Russia).  You just have to have that fire from within, and to not be satisfied.  We get in situations like today where we play to that level, but we don’t adjust, or have someone who steps up and says ‘Let me do it until we get back on track as a group’.  We don’t have that person right now.”

For John Rodgers and the Redkins, it was the opposite scenario from their own disappointing outcome last week against Russia.  With a commanding two-set lead entering the third, Loramie watch as Russia swept through the last three sets to send the same reminder…that you can’t be satisfied with leading.  You have to have the fire to finish.

“We knew they would be tough, and very competitive,”  said the ‘Skins Marissa Meiring.  “We knew we had to play our best.  I think they gave us everything they had, and some things we haven’t seen yet, so we just tried to play our hardest and do what we do in practice in today’s game.  Today it paid off.”

Loramie’s Emily Austin got her customary floor time as the Redskins’ hustling libero.

And of course, there is the issue of everyone giving Versailles their best game because of the extra incentive of playing the defending champions.

“But don’t forget where we live in Ohio,”  cautioned Rodgers.  “Playing the defending champions doesn’t mean as much here because there are so many past champions.  You count your wins where you count your wins, but at the end of the day most of the schools in this region have been a defending state champion. While I’m proud of what we did today, they (the kids) know that it’s only the next step to what we want to become as a volleyball team.” 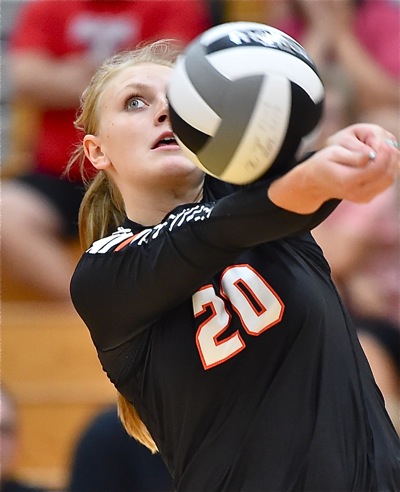 But the issue of the day, at day’s end, was two programs on opposite ends of the confidence spectrum.

“We work very hard in practice on being disciplined to your position on the court,”  said Rodgers.  “You have to work hard not to be out of position when the ball comes your way.  And today you saw that result of kids making great plays because of what we stress in practice.”

“I think it’s a matter of focusing on how we’re going to pull ourselves out of whatever it is that we’re in,”  she said.  “You look at Thursday and we were absolutely a different team, playing against a very good MAC school.  Right now I think we’re too emotional, and we need to understand that we’re going to get everyone’s A+ effort because of who we are.

“We’re just to need to step up and play with the attitude of not what we were, but what we are, and move on.” 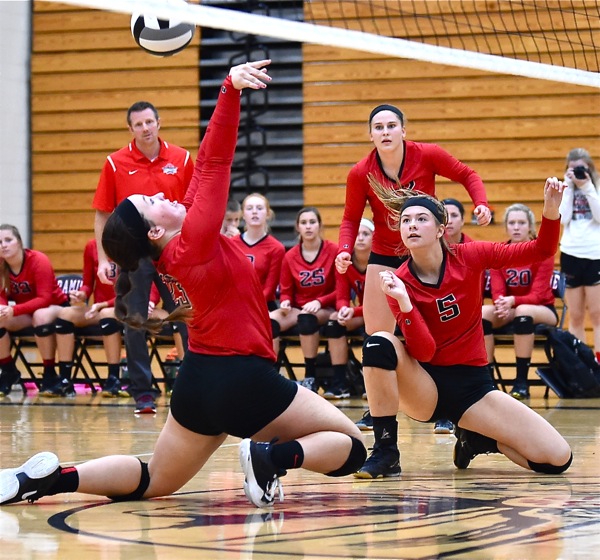