Case Of The ‘Quicks’…St. Henry Sweeps Coldwater In Three Sets

St. Henry showed why they’re considered a top prospect to win in Division IV with an efficient, straight-set win over rival Coldwater.  And it didn’t take long.

Not overly tall, Tricia Rosenbeck’s Division IV Redskins impressed by their ability to play defense, run down shots, and by their willingness to hustle.  They took nothing for granted.  They contested almost everything!

On defense Bruns and Ashlyn Gerlach had 10 digs each, and Gerlach led her team with a modest 4 serving aces.

The point.  It was a team effort in the most contributory sense of the word.

But in another word…if there’s a quicker, more athletic Division IV team on defense than what St. Henry showed Thursday…it’s hard to imagine how anyone could score on them!

“I would agree with you,”  said Rosenbeck.  “Our girls have talent, it’s just a matter of putting things together and playing with confidence.  We still have some moments when we let up and give up four or five points, but tonight I was really pleased with how we played with some fire and enthusiasm.  We had a good crowd here tonight and we showed them that we can play some volleyball.” 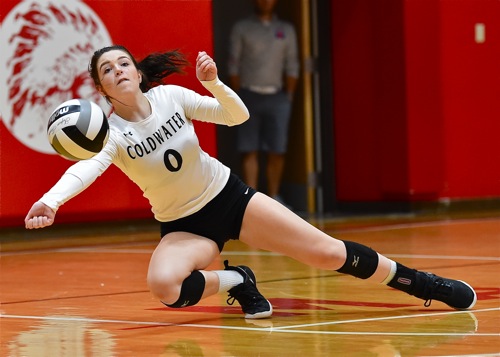 Coldwater’s Kate Leichty shows some moves of her own, ‘digging’ a St. Henry shot in the third set.

Hannah Bruns, a 5’8″ junior outside hitter was a whirling dirvish, dashing from sideline to sideline, and baseline to net, intercepting any and every ball she could from touching the floor.

And their patience to let the game come to them – to maintain some of that confidence about which Rosenbeck spoke – paid dividends against a stubborn Coldwater effort to tie and overtake St. Henry in the final two games.

“They were good,”  said Coldwater coach Nikki Etzler, who took her team to the State Finals in Division III last year.  “I think you saw tonight why everyone in the conference is talking about St. Henry.  They were very impressive with their commitment to play defense.”

And that defense forced Coldwater into mistakes – extended volleys that wore upon some of the Cavaliers’ inexperience.

“We’re finally playing with some emotion and intensity,”  added Rosenbeck.  “Because the beginning of the season we were kinda’ going through the motions. 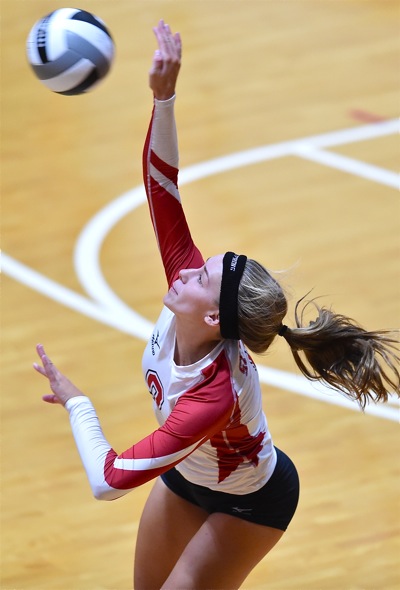 Ashley Siefring cranks one of her 9 kills in Thursday’s win over Coldwater.

“St. Henry always has good athletes, but this group seems to have a little extra, and I feel it’s everyone.  I don’t think there’s a weak point on the floor.  We can mix it up, go to any hitter, and everyone’s kind of an option.”

For sure, Ft. Recovery, Russia, New Bremen, Fort Loramie and other good Division IV teams in the area will be heard from between now and the November finals at the Nutter Center.  But what St. Henry showed Thursday – that quickness – can’t be coached.  And like Greg Snipes’ Lehman teams that won past titles with their ability to defend and frustrate bigger and more talented opponents, the word will soon be out (if it isn’t already) that there are no easy points against the Redskins.  Or as Rosenbeck worries…as long as they play with confidence.

“We have something special, and it’s exciting,”  she admits.  “But we’re not looking ahead.  We have so many good teams to play, we’re just going game by game to try to get better every day.”

And that list includes Russia, Marion Local, Lehman, and New Bremen all in the span of the next two weeks.

For Coldwater, Etzler admits that her own team will have a different personality once it gets some injured players back.

“It’ll be nice to get healthy,”  smiled Etzler, who spent a good half hour with her team in the post-game locker room.  4-3 is not what you expect from Coldwater volleyball after two weeks, but she makes no excuses.  It’s a long season, and it’s back-loaded with teams like Versailles, Ottoville, and New Bremen at the end.

In the meantime she gives credit where it’s due.  No one is playing any better right now than St. Henry.  Some as good, perhaps.

But no one has the ‘quicks’…like the Redskins! 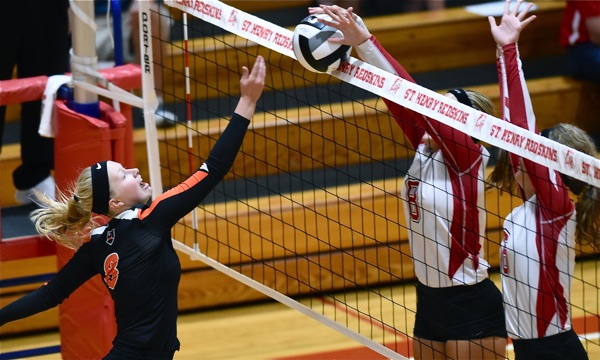 Defense at the net…Coldwater’s Alaina Steinke has her shot attempt rejected in the second set. 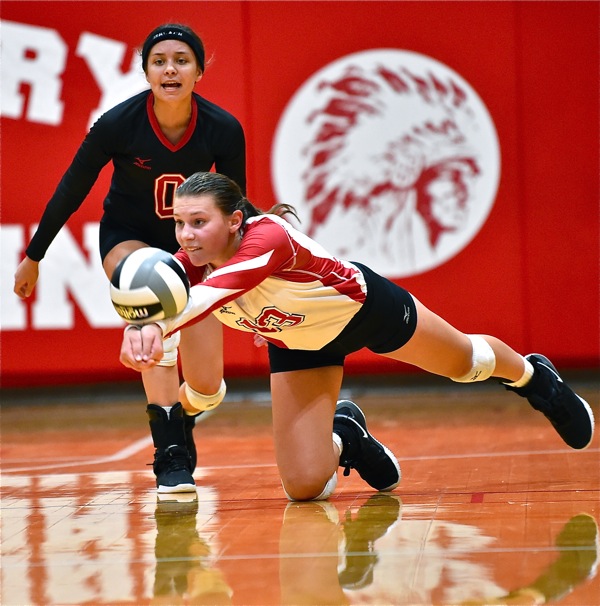