It’s probably the last batch of questions pertaining to the Reds in 2018, as interest wanes along with the club’s record, or so it seems.  Nonetheless, we will forward your queries on to the hall of famer, for better or worse.  Just like the Reds, or so that seems.

From Dave in Centerville:  Should the commissioner of Major League Baseball consider regulating the so called ‘rebuild?’

DAVE: How do you regulate a rebuild? Do you tell teams they can’t trade established players for prospects/suspects. Do you tell teams to draft better? With the Reds somebody would have to draft for them. Do you tell teams to keep their young players in the minors and don’t try to see how they do in the majors? It is just a matter of doing it right, the way Houston did it. And how about Tampa Bay? They traded eight pitchers and four position players from last year’s roster and this year the Rays are eight games over .500. The commissioner has screwed up enough things with his ‘regulatory’ hand by implementing replay/review, by legislating the prohibition of catchers blocking home plate and by doing away with hard slides into second base.

From Tom in Columbus:  Hal, you’ve often written how much you like Homer Bailey, so I write to ask…should the Reds cut their losses, swallow that contract, and just move on? 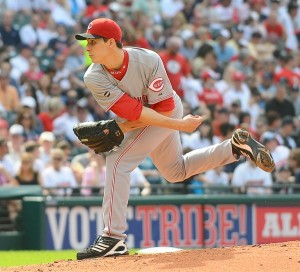 TOM: It is easy from our viewpoint to say the Reds should cut their losses and move on. Cutting their losses would mean eating more than $50 million they owe him on his current contract. That isn’t a snack, that’s a four-course meal. Yes, I do like Homer Bailey. Very much. And I am one of the few media people he likes. If you have an compassion in your heart, you have to feel sorry for the guy. He does work hard. He does try hard. Yes, he is 1-and-12 and the team is 1-and-16 in his 17 starts. But he has the second lowest run support in the majors. He has six quality starts and the Reds lost them all. He pitched a complete game and the Reds still lost. As I wrote recently, the guy isn’t snake-bit, he has an anaconda wrapped around his mid-section. Everything seems to go wrong when he pitches. They can’t trade him. Nobody would take him with his record and his three surgeries. They are stuck with him and let’s hope things do a 180 and he gets back to when he threw two no-hitters.

From Gary in Ft. Recovery:  First time writer to ask how dirty a baseball needs to be before the umpire throws them out of play?  There seems to be no consistency.  For instance, every pitch that hits the ground gets pitched, but ground balls to shortstop are thrown back to the pitcher and they play on with that ball.

GARY: Where have you been? Welcome. I agree and I am as confused as you are and all other fans are. Director of Umpiring Randy Marsh, a former National League umpire, often sits next to me in the press box and I have asked him that exact question. He shrugs and shakes his head and hems and haws and gives me no real answer. I would think a ground that first skips through the grass then bounces a couple of times in the dirt on its way to shortstop would have more flaws than a pitched ball that bounces in the dirt at home plate. But you are right. That’s exactly what they do. I have seen some of the balls they throw out of play and there is not a scuff or a scratch or a smudge on it. They use at least six dozen baseballs (72) for every game and they certainly could save a few bucks by keeping baseballs in play until they are hit out of the park. Of course, with the way home runs are hit these days, those balls wouldn’t last long.

GERRY: Couldn’t agree more. When I turned on one game I thought it was the Little League World Series in Williamsport and I told my wife, “Those kids wearing the light blue shirts with the yellow sleeves are awfully big.” I get it that it was for the players to wear their nicknames on their back and to wear gaudy shoes, but why did every team wear softball uniforms and truck driver hats? I assume most of those uniforms will show up on eBay any day now.

From John in Vandalia:  My first time writing but I enjoy reading your UD Flyer basketball stories during the winter.  I recently heard Ken Broo say on WLW, “The Reds have no plan.”  I wonder if that’s a commonly held opinion among other media covering the club?

JOHN: And a welcome to you, too. I thoroughly enjoy covering UD basketball and this week I will begin covering UD football, which I also have a great time doing. As for the Reds having a plan, if there is one, I haven’t really heard what it is. A couple of years ago the word was that they planned to be competitive by 2018. How has that worked out? I believe it is pretty common among the media that we all scratch our heads and say, “Where is this going and when it is going to get better?” Maybe the Reds should put out a manual entitled, “The Grand Plan,” and distribute it to the media so we can follow it. Instead we see the parade of young pitchers trudge to the mound without much improvement. The only starting pitcher these days that appears to know how to pitch effectively is Anthony DeSclafani and the Reds obtained him in a trade. And the real head-scratcher for me is why they are keeping Matt Harvey when he will leave after the season via free agency.

From David in South Point:  Where do you expect more turnover before next season?  Upstairs, or on the roster?

DAVID: Right now it appears the Reds are shuffling the deck chairs on the Titanic. There has been a lot of movement in the front office, but it is just moving around the people already working there. The Reds have only one free agent, Matt Harvey, so he is the only one who will leave that way. I would expect they would be on the hunt for starting pitchers. To do that, they’d have to trade some of the long line of young pitching prospects/suspects currently on the roster. And they certainly have a surplus of outfielders with Billy Hamilton, Scott Schebler, Jesse Winker, Phillip Ervin and Preston Tucker. If owner Bob Castellini would quit stopping trades involving Hamilton, the Reds probably could get something for him. This, of course, harkens back to the previous question: “What’s the plan?

From Joe B:  Greetings from the Sun Coast, where I imagine from reading your Hal McCoy website that it’s quite frustrating to write about what you see daily.  It leads me to ask if you’ve ever written something that upon further review you thought it best not to put in print?

JOE: Can you check on room 402 in the Palm Bay Club tower and see if my old condo is in good shape. I miss that place, where I resided for six weeks every spring training for 10 years in Sarasota. I walked out the front door, turned right, took 10 steps and I was on that glorious white sand of Siesta Key beach. My wife loved it because she is a beach person. She won’t go to Arizona because she says there is no beach. I tell her, “Honey, it is all beach, just no water.” Anyway, yes, one time. I heard a rumor once that Eric Davis almost was traded to the Phillies, but one source in Philadelphia told me the deal was scrapped because they heard Davis used drugs. Without checking more sources, I rushed it into print. Davis, a good friend, was devastated. It wasn’t true. Davis grew up in South Central LA and told me, “I saw every day what drugs do to people and their families and I’ve never touched them.” I felt awful and still do. To his credit, Eric The Reds never held against him and he remains one of my best friends in baseball.

From Tom Killilea:  Would you compare the Reds season in terms of beers…Pabst Blue Ribbon, Stroh’s,or Schlitz?

TOM: How about O’Doul’s or Sharp’s, near-beer that sort of looks like beer and tastes a little bit like beer, but isn’t the real thing. If I have to pick a real beer, how about Carling Black Label, a Cleveland-based brew that I first tasted while at Kent State University? After I spit it out, I swore I’d never drink another beer. I stuck to coffee because most journalists live on the stuff. When I began covering the Reds I tried Schoenling and I swore it was made by Carling. Yech. Fortunately, I discovered Yuengling on a trip to Philadelphia, but it wasn’t available in Ohio. Then a few years ago it came to town and my refrigerator is full of it. I wish I could compare the Reds to Yuengling, but right now they are still Carling Black Label or Schoenling. 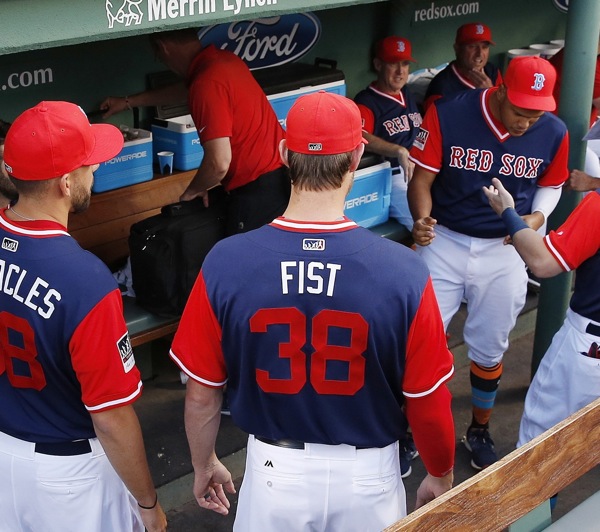 Beer League...I get it that it was for the players to wear their nicknames on their back and to wear gaudy shoes, but why did every team wear softball uniforms and truck driver hats? (Press Pros Files)