Seeing More Red? And The Cardinals’ Destiny In ’18

The whispers are out…the New Bremen Cardinals are a team on the rise, a team with young talent and an agenda for improvement.  “We plan to take the next step and move this program forward,”  says coach Chris Schmidt.

(Ed. Note:  John Husa is a former two-sport athlete and running back for the Lehman Cavaliers.  Upon finishing a fine high school career, Husa attended Ohio University, in Athens, where he graduated this spring with a degree in journalism.)

By John Husa for Press Pros

New Bremen – It’s been a long, grueling Friday in New Bremen, and the football Cardinals are getting ready to wrap up their two-a-day practice. 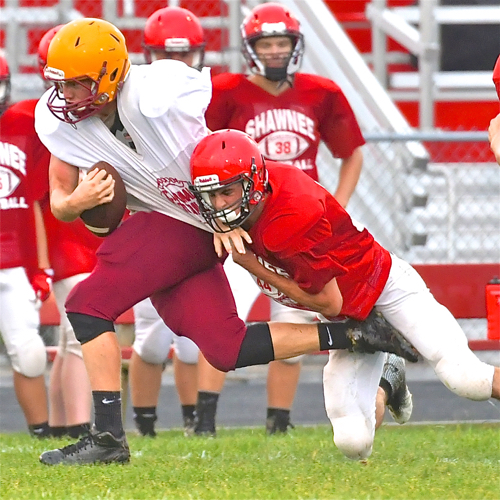 They’ve been working on their offense for the last 20 minutes, running a variety of plays, fixing formations, and working on blocking assignments in preparation for this upcoming season.

Suddenly, you hear the high pitch noise of coach Chris Schmidt’s whistle, and the players immediately gather around him. You can hear Schmidt telling his players the importance of working hard, and finishing the day strong.

We all know that end-of-the-week feeling of being ready to clock in, get home, and get our weekend started. Sometimes you need reminding to finish things, and to not tap out so quickly.

This was an important reminder for the players, because they weren’t getting off the hook without one last thing – conditioning.

The team separated into four “platoons” – as Coach Schmidt called it – at each corner of the field. On coach’s whistle, the players ran two laps and back to their station where they performed that corner’s drill. From the three-cone drill, to footwork, to agility, and one-on-one tackling, the players were tasked to compete against one another and to push themselves to get better. After every platoon completed every single drill at each corner, they finally met Schmidt in the middle of the field and wrapped up practice. 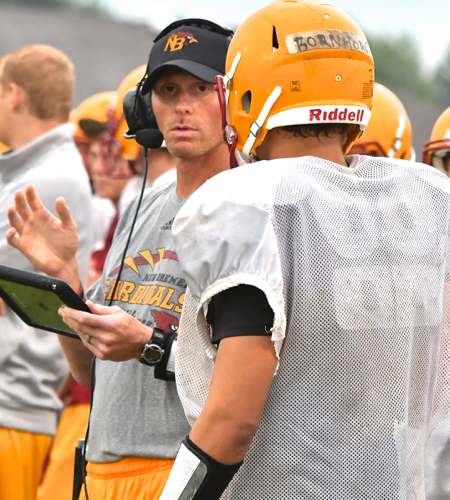 Not easy, but nothing gets easier from here. And with the home opener only being weeks away, the Cardinals are looking to change the narrative around their football program.

New Bremen is coming off of a 3-7 season in 2017, where they went 1-7 in the MAC. Cardinal football has had slim pickings in the past decade, as it has not had a winning record or playoff appearance since 2004. And with the daunting task of being a Division VII school playing in the MAC, it can sometimes feel like biting off more than you can chew.

“It can feel overwhelming if you focus on other MAC teams and not on yourself,” said Schmidt. “A big part of it is asking, what can we do to make ourselves better? There are things we can control and do to improve our team that will hopefully transfer to when we play our MAC opponents.”

While there have been struggles for the New Bremen football program, slowly but surely they’ve gotten better each year under Chris Schmidt.

“Our mission is to make sure we’re taking steps and strides to make this program the best it can be,” said Schmidt. “We feel good about the progress we’ve made, but we’re not satisfied. We feel there is still room for growth, and we plan to take the next step and move this program forward.” 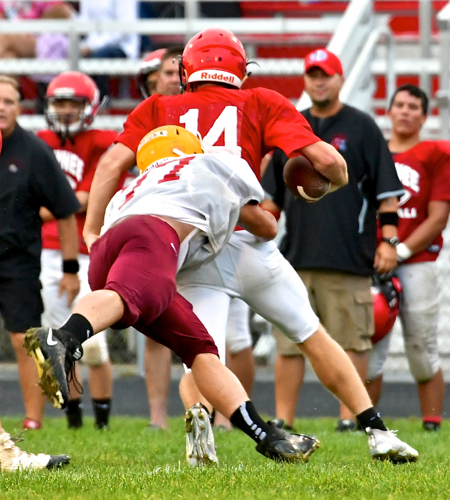 Jacob Rindler gets a sack in on the Lima Shawnee Quarterback.

Moving forward is always easier said than done, as it can be difficult when you have to adjust to outside forces that impose upon you. Some things are simply out of your control, but there is something the Cardinals plan to capitalize on – their athletes.

The Cardinals are led by 16 seniors this season, who have a good build at the skilled positions. The coaches plan is to utilize that advantage, in hopes that it will help them in winning more games this season.

“To win some games in this league you need your skilled players to step up and make some plays, and as coaches we’re hoping that we are putting them in the right spot and coaching them up to make these kind of plays,” said Schmidt.

When I spoke to senior Jacob Tangeman, he seemed eager for this upcoming season, but understands the steps needed to get better.

“We can’t go in making too big of goals for ourselves,” said Tangeman. “We have to go at it game by game, one step at a time, and focus on not getting ahead of ourselves. We’ve got a brotherhood here, and we have to go at this as a team or we won’t go anywhere.”

There is no shortage of resilience and energy from this group, and there is a sense of a strong camaraderie amongst the teammates. These traits will be ever so important if they hope to compete with the goliaths of the MAC, and to continue to move the program forward.

So, are the New Bremen Cardinals ready to show more red in 2018 – to accept the challenge? 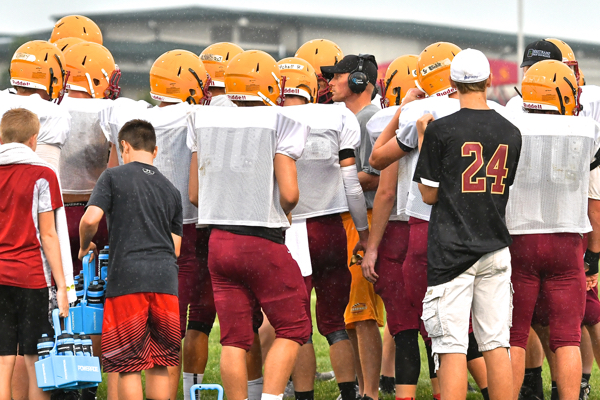 Chris Schmidt and Company re-group for a short break and a quick pep-talk. 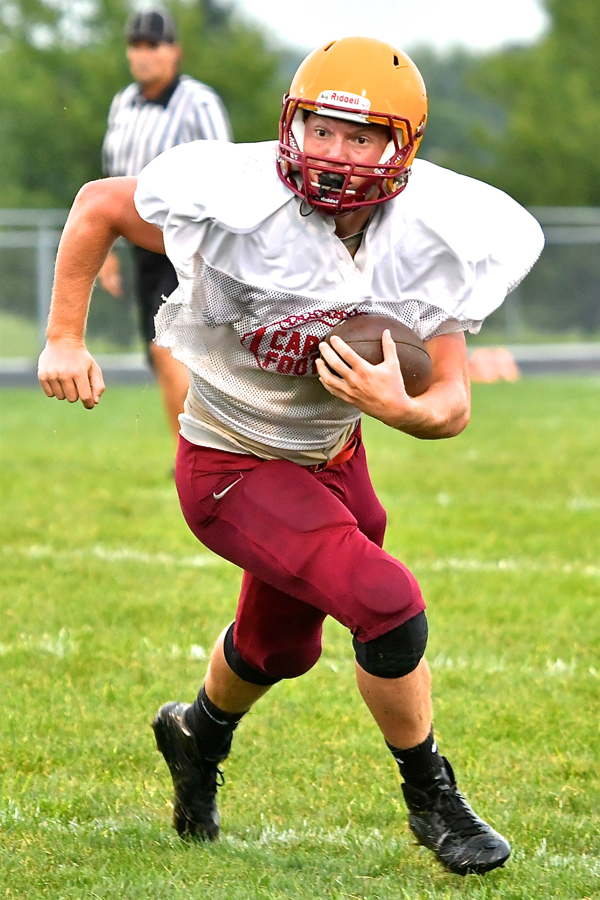 Grant Selby will be big on gaining yardage this season for the Cardinals. (Press Pros Feature Photos By Julie McMake Wright)