As things rev up for the coming sports season, so as well the comments of those reading and responding to the latest topics on Press Pros…specifically, baseball in the shadow of New Carlisle’s skyline,  hall of fame coach Al Hetrick, and the “man who could be your next coach”, but probably not.

All you junkies out there, you can literally smell it now, right?  Opening night of the high school football season is just days away, with volleyball, cross country, and making out in the back of the band bus.  Fall is in the air.  And with it, response to our recent article on the reigning Division VII state champion coach from Minster, Geron Stokes.

“I write to congratulate you on a very well done story about Coach Stokes.  I was at the state final game in December and remember thinking at the time about how well prepared Minster was to play.  I had no idea Stokes was the coach, of course, or anything about him.  Then, I see your story and the story behind the story and was even more impressed.  Great read.”  …  Richard Latner (Parma, Oh) 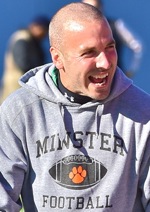 “Pound for pound as good a player as ever wore the maroon for the Hilltoppers, and they’ve had some good ones.”  …  Joe (Springfield)

“Interesting how he said he’ll get fired some day for just being himself.  But he won’t be out of a job long.”  …  Jason Donnelly

“They’ve needed a real ‘MAC’ coach in Minster for a long time.  They’ve got one now.”  … Bill Smith (West Milton)

Our August 2nd profile on hall of fame coach Al Hetrick brought the largest reader response of the summer:

“What a great story and tribute to Coach Hetrick.  Even from southern Ohio the legend of Versailles football and how he won against teams that appeared bigger and more talented was something to admire.  It’s great to see him well and still connected with high school football.”  …  Chip Isely (Ironton)

“This is such a great article, and it shows a lot about Al Hetrick apart from football.  Thanks for sharing.”  …  Mike (Dayton)

“Really good story.  Read it twice and shared it with a number of friends.”  …  Tim Wade  (Franklin) 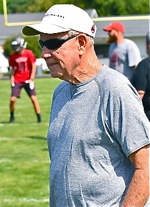 “In the tradition of Ned Booher, Skip Baughman, and the other great coaches of that era, Al Hetrick shone above them all.  And what people won’t remember is he was not an instant success at Versailles. It took some time.  Nothing in football comes easy, now or then, nor is it easy to sustain.  Hetrick was able to do that for many years and that’s what made him special.”  …  Joe Bookwalter (formerly of Clayton)

“I enjoyed the part about running six plays out of four formations and Bellaire still couldn’t stop it.  People around here knew what Al was doing for years, but they couldn’t stop him, either.”  … Mike Francis

“I shook my head over the statement about his life being a waste.  Men like Al Hetrick have more human value in their thumbnail than most have in both hands.”  …  Jim Stephenson (Delphos)

(Ed. Note:  Appreciate your comment…because it’s something that the man himself would never say – not in a thousand years.)

It seems that every time we run a nostalgic piece on area baseball it finds someone with some kind of personal experience to share.  Here’s some from our August piece on adult baseball in New Carlisle:

“I really liked this article. One reason is the memories it brought back. I played for Coach Davis on this field for 3 years.  We worked our tails off to maintain the field and it was something Coach did to create Arrow Pride. We played Chaminade in the 1970 regional finals at Crosley field and I think we were the last high school to play on the old Reds’ field. Chaminade went on to win the state championship under Jim Turvine who also coached the 1970 state championship basketball team.” … Steve Hunsucker

“Been reading Press Pro Mag for several years and two of your recent articles really hit home. The one on your AAA ump experiences with Lee Elia, and the story about the Dayton Wolves! I was driving home from work one day in ’95 and listening to the Lyle Steig sports talk show on WONE. He had two guests on speaking to adding an expansion team in the Roy Hobbs over-30 league in Dayton. It whet my appetite. Long story short, I made a phone call. In a couple weeks a “new team” held its first practice at Belmont Park in Dayton, and the Dayton Wolves were born. Jeff Brockert (still playing and wearing #14 at the game you attended at New Carlisle Sunday) and I became the “GM” and “Mgr” respectively. That first season we went 0-37. In a few years Jeff added some players (like John Young and Mike Barhorst, now in DABC HOF) and those 0-37’s became 37-0.  Thanks again.” … Larry Wilberding

“My brother and I grew up playing on that field, and we used to climb the sycamore tree you described and watch the games from there.  A lot of great baseball played there, and to me it’s a far better landmark than the grain elevator.”  … George

“You obviously have a love for baseball that few others can match.  I appreciated how you found a different expression of commitment to the game from those of different ages and skills.  My dad played adult baseball until he was 75.  Your story on baseball in New Carlisle was excellent.”  … Bob Rudiger 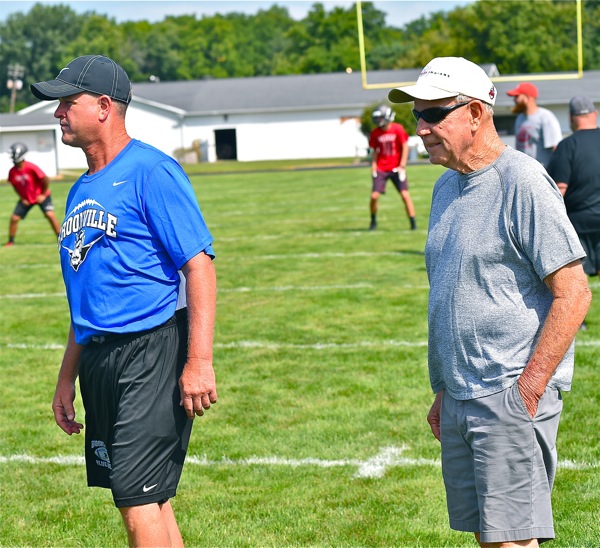 "Men like Al Hetrick have more human value in their thumbnail than most have in both hands." (Press Pros File Photos)