Another Good Baseball Story: August Heat, And The Art Of The Ejection

Thirty years after the fact, I found some notes from a miserably hot week in August, 1979, and remember how baseball reacts proportionately with the rise and fall of the thermometer.

Many of you write to say that you enjoy my stories of umpiring in the minor leagues;  and I swear to you that every one of them previously shared, from Chattanooga, Knoxville, Wichita (where they chased the armadillos with ball bats in the outfield), and Memphis (where Randy Schafer missed a pitch that broke my arm) are true.

Like all good stories, the longer it is after the fact the better they sometimes get, and the harder they are to believe.  But for the benefit of legitimacy, I will share that for those seven and a half seasons spent in A, AA, and AAA I kept a daily legal pad of the details about the people, places, and the bizarre things that are so much a part of minor league baseball.  Frankly, I don’t think I could ever run out of material.

I found another good one last week, a story from August in 1979 when my three-man umpiring crew, with Paul Maltby and Dave Strawn, were in Omaha, Nebraska for a series with the Oklahoma City 89ers, at that time an affiliate of the Philadelphia Phillies, and managed by a guy named Lee Elia.

The thing that caught my eye among the pages of my notes were the words…Omaha, miserably hot, bad home stand (ejections).  I eagerly read on, and within seconds I vividly remembered.

By August in minor league baseball everyone pretty much has a case of the “RA”.  “R”, of course, stands for red.  And “A” stands for the part of your anatomy that you sit on.  By August everyone’s tired, frustrated, disgruntled, and if you’re on the big league 40 man roster and you’re having a bad year, there’s no guarantee that you’re going to get called up to the parent club come September.  Tempers are short, emotions are high, and if there’s a pennant race thrown in, it can make for some very interesting games to work.  Such was the case for the Oklahoma City 89ers.

There were a number of players on that team that would go on to very fine big league careers, among them a pair of outfielders named Lonnie Smith (remember him?) and Keith Moreland, would later get traded to the Cubs and played many years in Chicago.  I remember that team as being one of malcontents, a team that argued if you said “good morning” in the elevator, and none of them was more irritable than the manager, Lee Elia.

Elia just had one of those personalities, the kind that makes you think of a rabid rat.  He groused about balls and strikes constantly, he argued obvious fair and foul calls, and tag plays on the bases were fair game because he felt that if he didn’t argue his players wouldn’t respect them.  Little did he know…that it didn’t make any difference.

It was hot in Omaha.  God knows it was hot.  And let me tell you, for being an upper-Midwest town you might not suspect it, but when August came around you could barely get your breath in old Rosenblatt Stadium, the place where they used to play the College World Series.  Rosenblatt kinda’ sat down in a bowl, and if there was any breeze or wind, it usually blew over the top of the stadium.  So the air on the field was nothing more than what the players called, “hot sick”.

My notes reminded me that I worked the plate in the opener of the three-game series, and the discussion in our locker room prior to going out was over what we were going to wear.  Paul Maltby was shaped like a pear, and he always liked to wear the old-style jackets to hide his ass as much as possible.  But the field temperature when we went out was 99 degrees, so Maltby was out-voted in favor of short-sleeve shirts.

It was one of those games where the players sleep-walked through the first five innings, scoreless, and not much hitting.  But in the top of the sixth OK City got someone on second with one out and Keith Moreland at the plate.  He promptly lined a single to center field that was hit so hard that the runner on second barely got to third.  But Elia, coaching at third wave him around to score, anyway.  Well, a guy named Clint Hurdle was playing out there and Hurdle at that time had a helluva’ arm…and he came up throwing.  And from about 250 feet he threw an absolute seed to the catcher at home plate, and on the fly.  The runner was barely halfway down the line by the time the ball got to the plate and the tag play was kind of an embarrassing concession.  He was out, as Marty Brennaman says, from here to there…except to Lee Elia.

Elia came storming down the line arguing that the catcher had tagged the runner with his glove while he held the baseball in his throwing hand, one of the most ridiculous claims imaginable.  But Elia was insistent, persistent, and the longer he went the more violent he became.  “You gotta’ get some help on that,”  he screamed.  “Don’t take the call for granted,”  on and on and on.  And frankly, when I looked out at my two partners they were standing on the infield dirt, hands in their hip pockets, laughing and shrugging their shoulders.  They knew the Elia act. 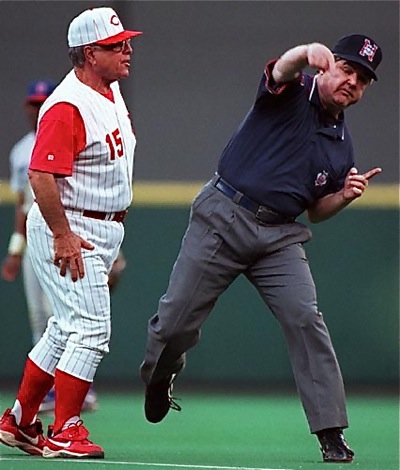 This is how it’s done…and if my old friend Jack McKeon got tossed by former NL ump, Jerry Crawford, I’ll bet he told Crawford he wanted to go home early.

Finally, Elia squinted up his face and said, “You’re going to die in Triple A because you’re horse—!”  That was it.  That was the magic word, and I tossed him, not that he seemed to notice, because he kept it up for another three or four minutes until one of his bench coaches came and dragged him off the field.  Not that it matters, but Omaha came back to win that game on a home run in the ninth, 2-1, and afterwards we slumped up the flight of steep steps to the umpire locker room, and past the OK City locker room.

The following night, I was working third and in the top of the second Moreland hit a line drive down the line and out of the ballpark, only about three feet foul – but near the top of the foul pole.  So here comes Elia.

“Did you see that good?” he demanded.  “Just tell me that you got a good look at it and I’ll leave you alone.”

“Well,” he started, “You sure didn’t see that play at the plate good last night,”  and immediately the red began to rise in his neck and face.

“Lee,”  I said.  “We’re not going to talk history.  Yesterday’s done and all I care about is tonight.”

“Bull—,”  he screamed.  “I got kids here trying to get to the big leagues and you anticipate a call like that……”

Let the record show that for a second night in a row, and in less than a half hour, Elia got tossed again.  The heat got to him, we all reckoned afterwards, as Omaha won the second game of the series in lopsided fashion.

On night three, I was working first base and when we got to the plate to exchange lineup cards Elia didn’t come out.  Instead, he sent Jim Nettles, an injured outfielder, with the lineup.  Nettles was the brother of former Yankee third baseman, Craig Nettles, and instead of handing the lineup cards to the plate umpire, he handed them to me, and said “Read the back.”

There on the back of the card Elia had scribbled, “You’re the worst ever.”  We all looked at it, broke out laughing, and before I could even look up to find him in the dugout, one of the other two umpires threw Elia out of the game before it even started.

This time, however, he conceded to comforts of the giant fans in the clubhouse, and before we went to our positions Elia was seen walking up the runway and to the locker room.

The following year he got the Chicago Cubs job, where he lasted two years and lost 158 games.  He famously once said of the Cubs’ fans, “They can kiss my ‘RA’, but most of them are out of work, anyway.  They don’t know what it’s like to earn a living.”  There was about two hundred f-bombs in a four paragraph rant that was published in the Chicago papers.

The last time I saw him was several years ago at a Clippers game, scouting.  I recognized him immediately, and by the look on his face I think he recognized me, too.  And you know what?…I think he was still mad!

Bats for every occasion, including ‘fungos’ and training bats. Phoenix is proud to support baseball on Press Pros. 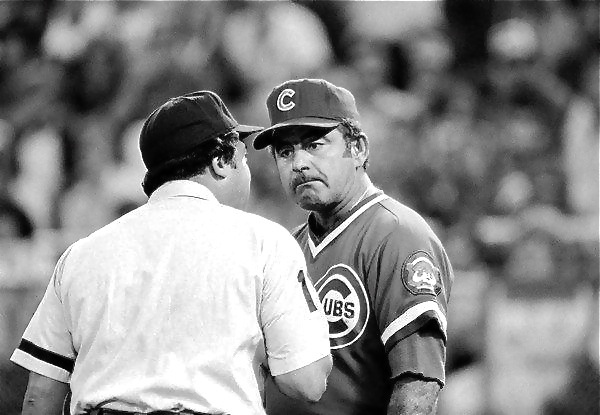