The Noose Tightens On Football…!

Six weeks removed from the opening games of the 2018 football season the pressure on football grows, as culture demands to know…if the risks aren’t greater than the benefits?

A couple of weeks ago, while visiting friends in southern Ohio, one of them showed me a  letter that was circulated (according to him) to fifth graders in a nearby school district.

The letter was this – a warning on the dangers of playing pee-wee football this fall, outlining the risks, including those of lasting physical impairment due to injury. The initiators of this letter was a group which called itself…concerned adults over the risks of playing football.

And now, six weeks removed from the start of another fall football campaign, the national media has picked up on the cultural concern – NBC, CBS, and ABC (among others) – running their own segments during the evening news questioning the safety of football. Even the Science Channel has picked up on this.

The story – the arguments – are both old, and chilling.

Old for the fact that the risks of playing football have been known for years – shoulders, knees, broken bones, and statements of pride that someone walks the way he does because of an old football injury.

Chilling, because of recent, modern data and research over concussions, head trauma, and chronic traumatic encephalopathy – what we now know about and fear that we never suspected a generation ago. Torn ACLs pale in comparison.

Lines are drawn over the argument, of course.

The old schoolers scream over the “pussification” of America – that we’re allowing our kids to become soft for fear of injury, and injury that could come just as easily by falling off a bicycle.

While the ‘moderns’ point to simple logic, and scientific research, and ask the rhetorical question. “If we accept the relationship between smoking and cancer, why do we turn our heads to the possibility of head trauma being related to CTE?

The possibility of concussion in football (or any sport) has always been there, just out of sight, or recognition. And in one respect the game of football has not changed in that respect.

But in another, more dramatic way, it has changed. We know that players are bigger, faster, stronger, and the hits are more violent than they once were. The risk “IS” greater when kids run the 40 in 4.5…instead of 5.0.

And, our obsession with bigger, faster, and more violent has brought attention to the TV highlights that kids watch and seek to imitate. 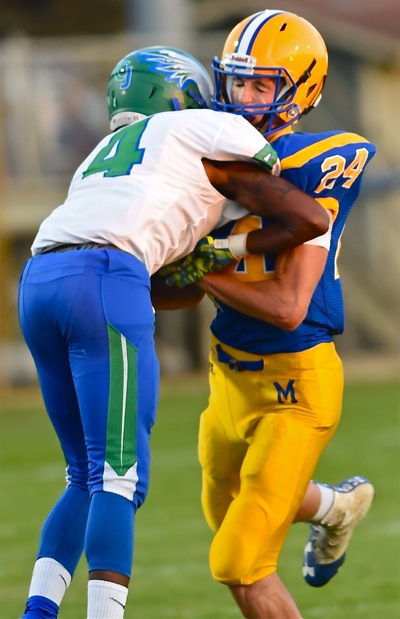 “We spend so much time now trying to teach proper tackling technique,” former Versailles coach Al Hetrick said last week. “Maybe we should just take the face masks off helmets and make kids tackle with their shoulder. We did that when I played and about all you saw back then was a busted nose or a split lip.”

True enough, Al, but again…they also run a lot faster and hit much harder than you did, too.  And modern coaches tell you, without reservation, “I like the hitting.”

There is no question that the noose is tightening on football, and no amount of form tackling is going to dissuade moms if they get it in their head that football is too dangerous. And when that happens the high school game dries up, which leads to the college game drying up, and eventually all the way to the NFL.

For sure, changes are being considered that would make the game safer, but not necessarily better.

In the NFL kickoff returns are being questioned – running starts that lead to violent contact. And I suppose punt returns will soon follow.

And this year it’s a penalty when a player leads with his head in any manner in the NFL, accidentally or otherwise.

And of course, hands off the quarterbacks.

But the more sensible conclusion to me would be to enlarge the field, and create more safe space. If they’re bigger and faster, make them cover more ground to make a hit, and change the angles. The Canadian Football League field is 110 yards long by 65 yards wide. The American field is 100 yards by 53 yards. The Canadian end zones are also ten yards deeper, twenty yards, instead of ten.

But critics says this is impossible for high school football because of expense – too much money to rip out running tracks and stands to reformat the field.

Still, changes need to be considered for the fact of faster, stronger, and more violent, because as neuropathologist Bennet Omalu suggests…there’s only so much the human body can stand. And while there may be no definitive means of proving it, is it not in keeping with other physical limitations? For instance, if you get hit by a car at 20 mph you’re going to get hurt – badly.  And modern athletes that weigh 200 pounds are capable now of running 20 miles per hour. Usain Bolt has been clocked at 28 miles per hour!

Former Bengals head trainer Paul Sparling once claimed that only 10% of high school players actually do enough strength work to adequately protect themselves on the field to begin with.

So, this is the noose, while the purists shake their heads and say we’re just getting weak.  But those same people lean on science for a cure for cancer and alzheimer’s.

And in the meantime a great American pastime hangs in the balance. Football is fun. Football is wholesome. And football is tradition. Actually, it’s probably good for most.

So how was anyone to know…we might ‘outgrow’ it? 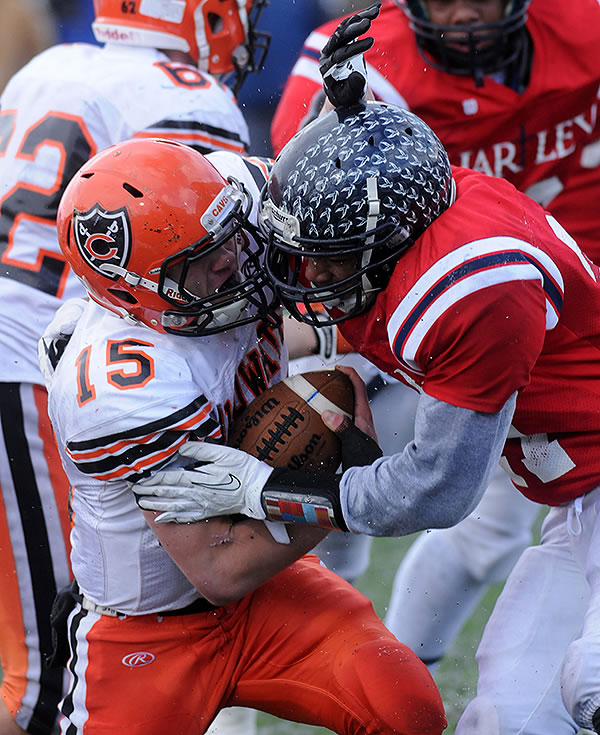 Head to head....New rules in the NFL forbid initiating any kind of head to head contact. (Press Pros Feature Photos)