Impressive Summer Stats Point To Breakout Ahead For Buckeyes’ Dingler

Coming off a freshman season where he showed great versatility in the field, the Buckeyes’ Dillon Dingler has found his hitting stroke in summer baseball –  proving reliable as a fixture in the middle of their batting order next spring.

Chillicothe – Playing a collegiate sport is a year-round commitment for the vast majority of athletes.

The end of one athletic season means the beginning of training for the next. For baseball players, this often means playing in non-NCAA affiliated organizations across the country like the Cape Cod League or Prospect League.

Most Ohioans know the small town of Chillicothe, Ohio for one of three things.

It was the state’s first capital.

A Glatfelter-owned paper mill whose red-and-white striped smokestack is the city’s most prominent visual landmark.

And on the darker side, Ohio’s male death-row inmates are housed at a prison within half a mile of a high school. The only affiliated sports team of note is the Prospect League’s Chillicothe Paints.

Ohio State sophomore catcher Dillon Dingler is spending his summer playing for this club in a pulp-scented stadium named for the Veterans Medical Center beside which it’s located. And if his performance there is any indication, he’s poised for a breakout season stepping in for drafted-and-signed Jacob Barnwell (Colorado Rockies) at catcher for the Buckeyes.

“I’m trying to get back to getting the fastballs, getting the pitches I can hit and driving ‘em,” Dingler said prior to a Sunday evening game with Kokomo. 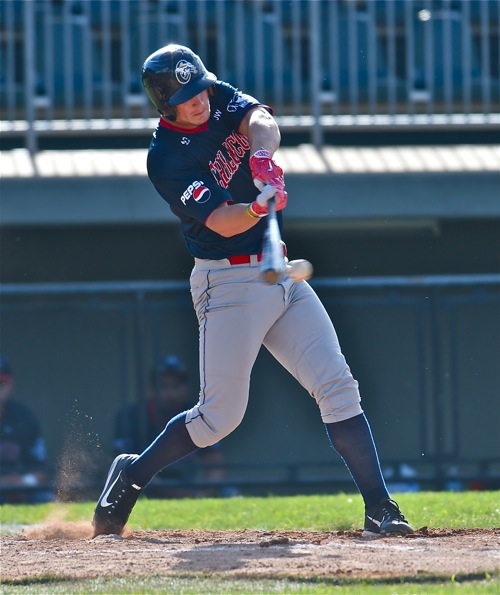 Dingler leads all qualified Chillicothe hitters with a .365 average, and has 20 RBIs in just 25 games.

Dingler leads all qualified Paints hitters in batting average (.365), and is fourth on the team in RBIs with 20 despite playing in just 25 of the squad’s 48 games.

That’s all in a wooden bat league.

“He’s driven the ball well for us,” Paints coach Brian Bigam said. “Once he was able to come in at the end of June, our offense has picked up, and that’s in big part because of him.”

Bigam and Ohio State coach Greg Beals share a common philosophy when it comes Dingler. His bat is too valuable to leave out of the lineup, even if it means playing him slightly out of position. Recently Dingler has played right field for the Paints while minor, lingering knee injuries heal, much like he played center field for the Buckeyes to make way for Barnwell.

Such position switches would raise a defensive issue if not for Dingler’s anti-classical build as a catcher. Put simply, he’s got his fair share of athleticism. Turning 11 of 34 inside-the-park hits into extra bases requires at least some semblance of speed.

“He’s got an extremely strong arm, hard to run on,” Bigam said. “I know at times during the year he played center field for Ohio State so that just tells you the type of athlete he is.” 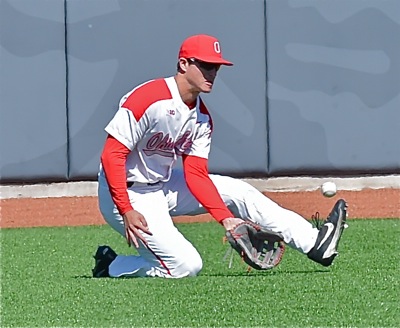 Dingler proved his athleticism by playing a more than commendable center field for the Buckeyes.

With Ohio State Dingler hit .244 with four home runs and 17 RBIs through 53 games in his freshman season, at times showing the smooth swing that earned him such early playing time, but leaving plenty of room for improvement. Batting .365 against other collegiate ballplayers indicates that such improvement is happening.

“[I’ve been working on] the little things like framing pitches,” Dingler said. “Making sure I have good at-bats.”

Such strides are a welcome sight to those around the Buckeyes. Two of Ohio State’s four best hitters, statistically, from last season, first baseman Noah McGowan and left fielder Tyler Cowles, have graduated. Key contributor Bo Coolen joins them, and Barnwell left college a year early to play professionally.

In the meantime, the Paints are making the most of Dingler’s production. Batting from the third spot in the order since his arrival in Chillicothe, the soon-to-be sophomore is a big reason why the team is placed second in the Prospect League’s East division, half a game behind the Kokomo Jackrabbits.

“We’ve got great team chemistry,” Dingler said. “The talent really backs us up. It’s a lot of fun playing here.” 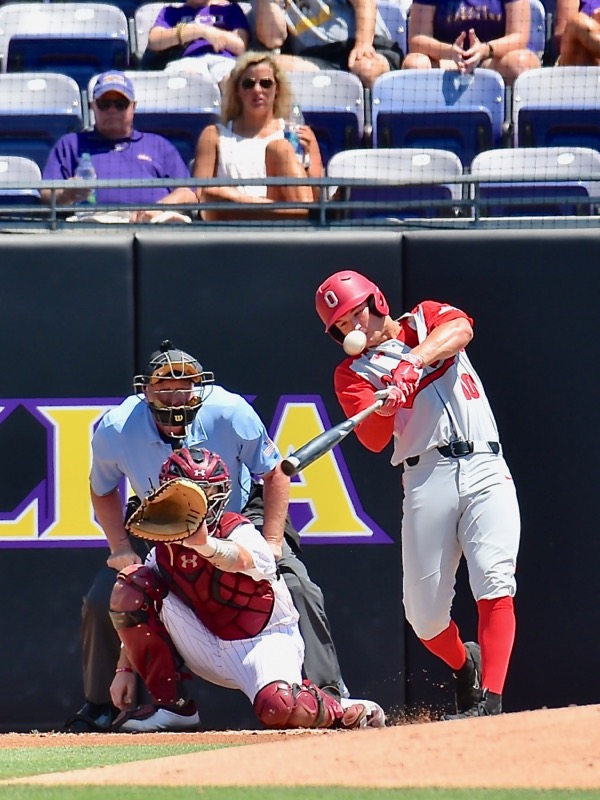 Dingler showed some impressive power during the college season, here belting a home run against South Carolina in the NCAA regional.