Her year as the coach of the reigning champions in Division IV volleyball has gone much too quickly. Now, New Bremen’s Diana Kramer tries to make the most of time…while she regroups to defend a title.

Diana Kramer is hardly a household name in Ohio high school sports. Not that she’s not known, because in area volleyball she’s highly respected, and reigns as the coach of the Division IV state champion New Bremen Cardinals.

But it takes more than one title to become a household name, and last November’s title win not only marked her first as coach, but the first team title in the history of the school. No, the only household name she’s really familiar with is “MOM”. She and husband Alan are the parents of four.

So while football names like Goodwin (Tim, from Marion Local), Stokes (Geron, from Minster), and Otten (Chip, from Coldwater) go through the annual rite of answering questions about defending their latest championship, Diana Kramer’s summer has pretty much been business as usual.

“Which is fine,” she says. “I’d much rather be a mom to my kids and even my players – some of them call me Mom – than a household name as a coach.

“The only thing is…the older you get the faster the summers seem to go. The kids are doing more things and the time just flies.”

Among all coaches in Division IV, Kremer has the distinction of filling the biggest vacancy of all from a team that lost just one game in 28 outings. Paige Jones, who set a tournament record for kills in a single game (47) and the tournament, overall (72), has moved on to the University of Michigan. And trust it, there was no one close to her last year for the sake of her athleticism and impact.

“Yeah, we have to get accustomed to the post-Paige Jones era now,” she says.

But part of her fleeting summer has been the acclimation to Jones’ absence, and things have gone just fine. Fabulous, in fact, an adjective that Kremer seems to favor.

“We just played over the weekend in Muncie, against some incredible talent, including last year’s Indiana state champion,” says Kramer.

“We did pretty well, and got first in our pool, but ended things by playing a team with a girl going to Minnesota, one going to Ohio State, one going to Nebraska, and one going to Northwestern. We had some moments of greatness…and then our youthfulness showed through at times.” 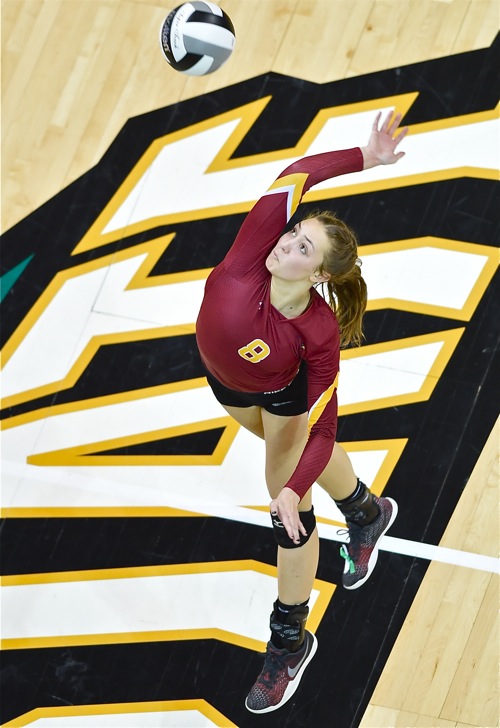 The opening for high school volleyball is now one month away, and the long grind back through conference, district, and hopefully regional tournament challenge.  They wear the target, of course, and lest anyone accuse them of being one and done, Kramer feels well fortified by returning lettermen from the title team that are growing up as individuals as well as in the sport.

She rattles off one name after another.

“Macy Puthoff has had a great summer for us, but she’s had a great year, overall. People forget sometimes just how many sports are girls player other than volleyball; and Macy was on a state track team so she has that kind of additional experience.

“Claire Pape is back as a sophomore, and people may not remember her, but she may be the best blocker in the MAC this year.

“Rachel Kremer will be back and she’s really tough. Taylor Paul will be back, and people forget that she had a fabulous state tournament. So really, I have about seven very, very good hitters and only have positions for six. The nice thing is that we have so many girls willing to play anywhere that helps our team.”

So no, there’s no reason to expect any kind of requiem, or ceremony of remembrance, this fall for Paige Jones. The past is the past, and Kramer and company (has a ring to it, doesn’t it?) is anchored and ready for another fabulous fall of MAC volleyball.

“I don’t know if the league will be what it was last year (with two state champions), but it’s going to be very good again,” she assures. “We’re going to be very talented, and the competition is going to make us that much better come October.”

She’s a little bit like the Everyready bunny – her energy indefatigable. On a Sunday night after a full day at the Columbus Zoo, Kramer had her kids washed, settled in front of the TV, and still had enough zip left to rattle off all the good things about volleyball, and volleyball players, and a few well-used cliches’ about the clock winding down on their year of “reign”.

“It kind of makes you humble, in a way,” she concluded. “Because we accomplished what we did because we were a team. But we’re still the champs until someone beats us.

“And we have so many kids that are doing well in other sports – I just feel like New Bremen is making a turn.”

She hung up the phone, and the sent me pictures of the kids, scrubbed, ready for anything, a reflection of fabulous household organization. Diana Kramer is one proud mom…and a helluva’ coach. 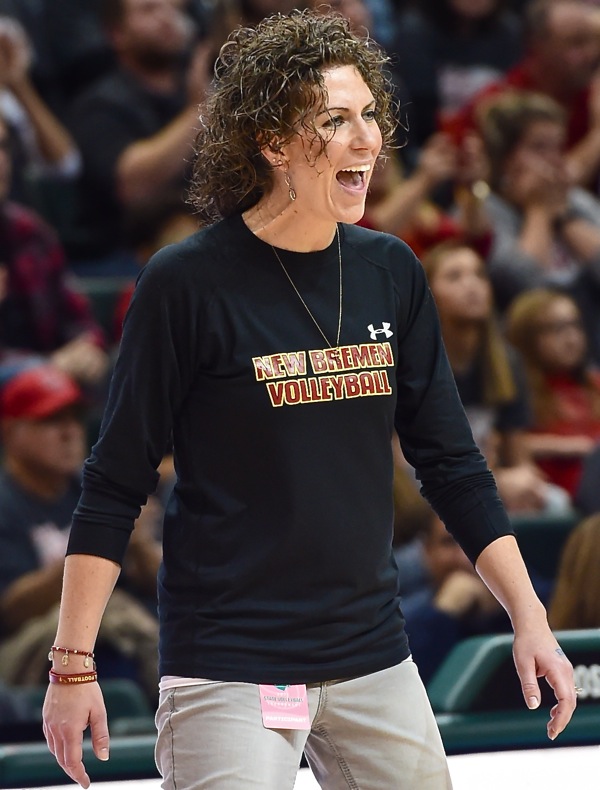 "We're still champs until someone beat us," says Kramer. "But we have so many kids doing well in other sports. I just feel that New Bremen is making a turn." (Press Pros Feature Photos)