Home Run Derby…As It Was, With “The St. Wendelin Walloper”

Before you get blown away by today’s home run derby, once upon a time it seemed much more real…and St. Henry’s Wally Post will immediately make area readers of Press Pros sit up and take notice of how it once was, and should be again.

I watched for a while on Monday night…the home run derby on ESPN with batting practice pitchers lobbing the ball in from 45 feet and hitters flailing away for four minutes before sitting down.

Frankly, with all the glitz, and smoke, and commercials for violent movies (Mile 22)…it didn’t suit.

But once upon a time, when I was ten years old, the original Home Run Derby show was something I never missed. You see, the first episode I ever watched came in the winter of 1963. The show back then had been filmed in California for replay during the winter months, and it had been on for a couple of years before I knew it was there.

The reason?  My family never had a TV until the summer of 1963, and television back then was a far cry from what we know now.

Mostly, my dad and mom watched the news and weather. They both taught school during the day and evenings were reserved for grading papers and preparation for the next day’s school for them, and homework for me. Trust it, there was no such thing as television after homework. What came after homework when I was ten…was bed.

In January of that year I came down with the measles, something I wouldn’t recommend to anyone, and something you rarely ever hear of now because of vaccinations. I was home for two weeks and on this one particular Saturday the station in Huntington, West Virginia (Channel 13) showed a re-run of one of the old Home Run Derby shows.

Being a baseball kid, I forgot all about having the measles because this particular episode featured a player I had met the previous summer, in 1962, when he was a member of the Cincinnati Reds – Wally Post.

It was my first major league baseball game, in May of ’62 (Reds vs. Mets – Joey Jay against Alvin Jackson), and my dad and Little League coach Eddie Hardy took me down to the Reds dugout to meet Post as he stood by the fence, waiting to take batting practice. I remember him being very kind, and he asked us to wait for ten minutes until he finished his pre-game hitting. 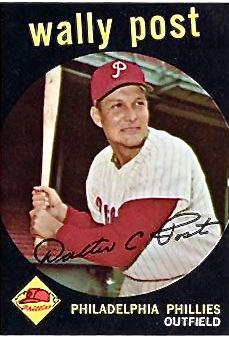 Probably the best Wally Post card of all time…pictured as a Phillie on the 1959 Topps set.

When he was done, he didn’t forget and came back to talk and promptly fished a brand new National League baseball out of a bag on the top step. He handed it to me and said, “Here, take this home and practice a lot. That’s how you get to the big leagues.”

Geez…it was like a thunderbolt had struck me. Wally Post, whom announcer Waite Hoyt liked to call the “St. Wendelin Walloper” on his radio broadcasts, had given me a baseball, and signed it, at my first big league baseball game. And on that same day, Post came to the plate as a pinch hitter late in the game and hit a home run to give the Reds a 2-1 win.  Now, a year later, he was on television (in a Phillies uniform) hitting against Hank Aaron on the Home Run Derby Show.

That it was 55 years ago, and while I did survive the measles, I never got over Wally Post (I still visit his gravesite when I’m in St. Henry), or those old re-runs of Home Run Derby. Post would play until 1964 and hit 210 career home runs.  I was there for number 206.

I’m pleased to share it with you here…the story of how it was back then, and the “St. Wendelin Walloper” against Henry Aaron.  As for who wins, I won’t say. Click on the link, enjoy it, and see for yourself.

As it was, and how it should be.  Almost worth having the measles again! 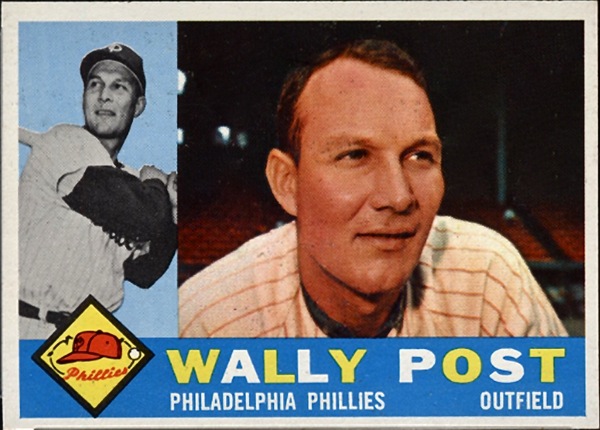