Culture Catches Up To Mike Matheny

Culture, as much as the record, will account for the dismissal of St. Louis Cardinals’ manager Mike Matheny on Saturday.  A reality that cooks at a slow boil in sport at every level.

Yes, Cardinals manager Mike Matheny was fired on Saturday, just two hours after the Reds overcame two rain storms, an early 2-0 deficit, and then did some storming of their own with an 8-2 win.

In a nutshell, it’s a big deal to fire the manager of the Cardinals.  Bigger than it is with the Tampa Bay Rays or the Seattle Mariners.  Because…the “Cardinal Way” means winning, and winning with no public signs of fracture, or unhappiness.  There is no greater picture of wholesomeness in sports than Cardinal baseball, where everyone comes to the games wearing red and white, and bigger still…EVERYONE COMES TO THE GAME. 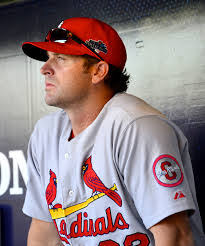 You don’t tolerate veterans ruffling the feathers of younger talents in the clubhouse for committing rookie mistakes, as it’s said that Matheny allowed.  It’s being reported that rookie phenom, Jordan Hicks, was the focal point of verbal abuse because his 100 mile per hour fastball, left in the middle of the plate, was no mystery to opposing hitters.  And when some of the veteran Cardinals routinely brought this to Hicks’ attention, Matheny turned his head the other way.

It’s reported that he was fired because clubhouse harmony is just that important – everyone happy with their role and their relationship with the manager.  If players don’t like his personality it affects the day-to-day outcome on the field.  It’s said that Matheny was too “old school”, and that the three-year demise of the Cardinals since they last made the playoffs playoffs is a reflection of the disconnect between manager and players.  “Old school” means blunt, by the way, and in today’s culture there’s no room for blunt.

And by the way, it’s fair to think of Matheny in terms of ‘you do it my way, or it’s the highway’, because he has published a book entitled The Matheny Manifesto, where he details that mindset even as it relates to Little Leaguers.  So yes, in this day of “kum ba yah” you can make the point that he forces people to take sides.

Ironically, they’re saying that Jim Riggleman, in Cincinnati, has affected the Reds’ positive turnaround BECAUSE he is old-school, putting more emphasis on personal responsibility for execution.  I don’t know…I’m not there.  Like you, I just listen to the narrative from Thom Brennaman, Chris Welsh, et. al.  So, we’ll see how that works over the next seventy games.

But here’s an even bigger irony.  It used to be that how things were at highest level of sports would eventually filter its way down to the grass roots level.  Now, it would appear that culture’s demand at the grass roots – kinder, gentler, more compassionate – has changed traditional direction from descendency, to ascendency.   The Cardinals will now search for someone as their next manager than can make the Jordan Hickses of the world feel better, and hope the numbers reflect warm and fuzzy.

Bottom line….you can’t fire twenty five players.  But you can replace one manager.  It’s always been that way in baseball.  But now baseball has become a reflection of culture…where safety is a higher priority than playing to win,  and the tail sometimes wags the dog.

And if Jordan Hicks gets sent to the minors next week no one will mention Mike Matheny.   It’s a business decision – a player’s lack of production.  But when the whole team’s hitting .240 (the Cardinals’ team average) who’s fault is that, really?