As the fortunes of the Cincinnati Reds have improved, so too, it seems, is the interest in readers who write to hall of famer Hal McCoy – about Jim Riggleman, Tyler Mahle, and where to the Reds go from here.

From Dave in Beavercreek, Miamisburg, and Centerville:  Hal, have you ever been denied service in a restaurant because of your affiliation with the Cincinnati Reds?

DAVE: I have been asked to leave many places, but not because of my association with the Cincinnati Reds. I told to leave Kent State University by the school’s president after I wrote a column in the Daily Kent Stater saying coach Bill Bertka should be fired. I was given the option of printing a retraction for finding my education elsewhere. The retraction appeared the next day. I was asked to leave Foxsports.com because owner Bob Castellini didn’t like what I was writing. A meeting with Mr. Castellini smoothed things over and I was able to continue. I am either good negotiator and a good BSer. But, no, I’ve never been refused restaurant service because of my association with the Reds.

From Jim in Versailles:  Love the Press Pros site, and long-time admirer of your work.  It appears that a change in managers has made a big change in the Reds.  Is this something that should have been done before 2018?

JIM: Thanks for the kind words and I love writing for PPM and wish I could do more. Anyway, hindsight is 20/10 and it is obvious the team is playing much better under Jim Riggleman. And I believe he should be hired for the next three years. Sometimes a different voice saying the same thing in a different way works wonders. After three straight last place finishes the team probably heard the same things over-and-over from fired manager Bryan Price and they tuned him out. One does wonders where the team might be without that 3-and-15 start his year under Price.

From David Waller:  Given the difference in the way they’ve played since Jim Riggleman took over, is it fair to say that Bryan Price’s spring training agenda failed miserably?

From Tim in Troy, Ohio:  What are Jim Riggleman’s strengths as a manager, and what makes him different from Bryan Price?  Obviously, something is different.

TIM: Wow, this is becoming The Jim Riggleman Edition of Hal’s Answers. Riggleman is a been-there-done-that baseball lifer. He has managed the San Diego Padres, the Chicago Cubs, the Seattle Mariners and the Washington Nationals. There is nothing in the game he hasn’t seen, heard or done. Bryan Price had never managed and was learning as he went along. He was at the formative years of some of the Reds young players and now Riggleman is putting on the finishing touches. Riggleman is old school, but adaptable to some of the new things common to today’s game. He is a great communicator with the players and quickly addresses any issues that surface. Price was more of a leave-them-alone-and-let-them-play type of guy. As is plain as the stitches on the baseball, Riggleman has the team’s attention and admiration. 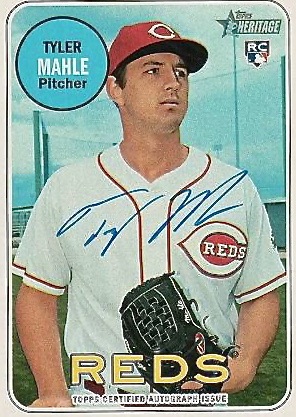 From Joe B, in Siesta Key:  Hey Hal, where did Tyler Mahle come from and how did I miss hearing about him?  And, do you think he’s another Reds one-year wonder?

JOE: How are things in one of my favorite places on the face of the earth and how is Captain Kirk’s? Mahle is no one-hit wonder, although he may throw a few one-hitters in his career. This kid is for real. Nothing bothers him. You can’t tell after a game if he pitched a no-hitter or if he gave up seven runs in three innings. You must not be paying close attention. Mahle threw both a no-hitter and a perfect game in the minors. He was a draft steal, selected in the seventh round of the 2013 draft out of Westminster, California, out of high school.

From Bob in Portsmouth, Oh:  Hal, what’s the word around the Reds about the players they took in the recent draft?  What do you hear about Jonathan India (from Univ. of Florida)?

BOB: Most people in the business believe the Reds should have gone stronger on the pitching front with their top picks. While they selected a basket full of pitchers in later rounds, they didn’t go for some of the available top prospects. However, Jonathan India is considered on the same level with 2016 No. 1 Nick Senzel. Both carry ‘can’t miss’ labels but a lot of ‘can’t miss’ guys miss badly. My concern is that the Reds are overloading themselves with infielders. They’ve signed Eugenio Suarez to a seven-year deal, they say Jose Peraza is the shortstop of the future. Senzel and India both played third base in college and they aren’t going to play third base with Suarez there. India says shortstop is his real position, “Where I’ve played all my life.” Of course, both Senzel and India have to prove their worthiness. Senzel, though, has hit at every level, including Triple-A. The major concern with him is a lot of injuries so far and a couple of bouts with vertigo. Remember when Reds first baseman Nick Esasky battled vertigo? It led to his early retirement.

From Brad in Dayton:  Hal, I enjoyed your coverage of the state high school tournament and hope you will do that again.  Great story on the C-J Eagles.  How much longer for Billy Hamilton, and why has he struggled to hit after five years?  Will this be his last year with the Reds if he continues to hit .200?

BRAD: It was my great pleasure to cover the state high school baseball tournament. I call it getting back to the grass roots of the game, where kids are playing for the love of the game. I hope to do it every year as long as I can. As for Billy Hamilton, as I write this he has gone 6 for 7 with three stolen bases and a walk in two games against the Cubs. And, of course, he has made a couple of dandy defensive plays. I’d like to see Hamilton quit switch-hitting and stick to his natural right side. He hits better from that side and seems more natural. And he is amenable to doing that if they want him to do it. As far as it being his last year with the Reds, I doubt that. His speed and defensive skills are too valuable and the Reds firmly believe they can eventually put him on track to a .350 on-base percentage, which is what he needs to do. But we’re five years into the process and so far, so bad.

From Don in Vandalia:  It seems the Reds would have to play the best baseball in the National League to even finish .500.  So what changes would you expect at season’s end?  Will Riggleman be back?

DON: I sincerely hope Riggleman is back as the manager. He deserves it. But when the Reds fired Jerry Narron, they made Pete Mackanin the interim manager and he finished the year above .500. I lobbied for him to get the job, but they hired Dusty Baker. My feeling is that the Reds are on the hunt for another name manager. As I pointed out above, Riggleman has all the experience the Reds need. What will the club do in the off-season? Hopefully they’ll drop the rebuild excuse and start adding a veteran and successful free agent starting pitcher or two. While some of the young Reds pitchers appear on the verge — Tyler Mahle, Luis Castillo, Sal Romano — they are still learning and inconsistent. Of course, they are still stuck with Homer Bailey’s contract for another year and that makes signing a free agent pitcher (or trading for one) pitcher. And what established pitcher wants to risk his ERA in Great American Small Park? 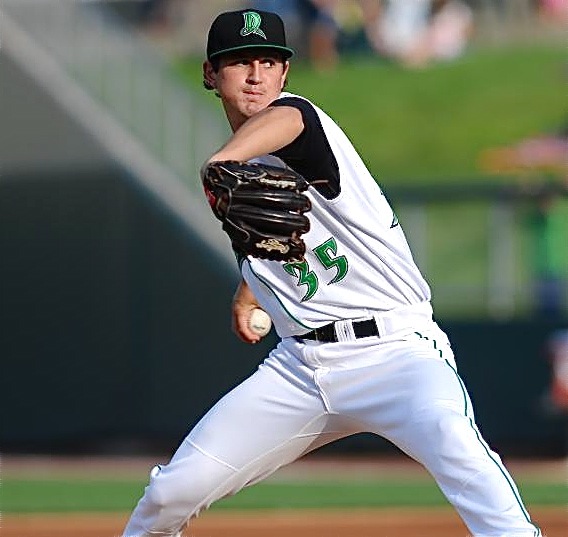 No flash in the pan...shown here as a Dayton Dragon, righthander Tyler Mahle is the real deal, and according to Hal a building block for future Reds success. (Press Pros File Photos)