Most Influential: Don Flinn…And Why There Is No Good Writing!

Of all the influential people in my life, one educator heads the list for making the most lasting of impacts.  Not music, not business, or even baseball, it was my high school English teacher who heads the list of people who helped me find my calling.

(Ed. Note:  The first in our summer series of people who left a lasting impression on the people and communities they served – on the court, in the classroom, and in the lives they have impacted.  We take the time to share their contributions.  Enjoy a good rummer read…on Press Pros.)

He was, and still is, the most influential educator in my life.  And the irony is…at the time I came under his influence in the fall of 1969 I had no idea.

And this…this will come as a surprise to many of you who know me best.

In my days as a musician, at Piqua High School and Ohio State University, many would assume that the person who made the biggest impression was Bob Hance, the former city manager of Piqua and long-time cornet soloist and conductor with the Piqua Civic Band.  I studied under Hance as a teenager for several years.

In business, I must give credit to the relationships I had with two men – Roy Baker, the owner of BK Photo in Troy, Ohio…and Bob Younger, the owner and publisher of Gettysburg Magazine, in Dayton, who shared with me that people, regardless of generation, still like to read, and taught me how to attract them to a good story.

And of course, in baseball that person would have been my high school coach and friend, Jim Hardman.  It was Hardman that shared with me that you can’t play baseball forever, but you can appreciate it for life, and benefit from the life lessons you derive from the game.  Throw strikes, he would say, and see what the hitter will do;  then react and catch anything that comes your way.

But given what forty nine years have taught me since graduating high school in 1970 – what you learn about yourself as life passions come and go – the person who turned out to be the most influential person in my life, professionally…was my high school English teacher, Don Flinn.

Mr. Flinn, as we knew him then, was at Piqua High School during an era that produced some remarkable students and alumni.  Dave Gallagher was my high school classmate and went on to play football at the University of Michigan and in the NFL.  There were numerous others – Barb Fite, Dave Hance, Lynn Miller, et. al., who left PHS with me in the class of ’70 and went on to outstanding careers in education, finance, and in Gallagher’s case…medicine.  And almost all of them sat in Don Flinn’s senior composition class.

Composition, or writing, was a big deal at that time if you were taking the college prep curriculum.  For, it was a well-known fact that when you got to college the toughest challenge for most incoming freshmen was those first-year writing courses.  At Ohio State, it was English 101, 102, and 103.  You had to take them, and you had pass them because at that time it was a necessary foundation for the next three years of school and a future degree.  If you couldn’t write successfully, you didn’t graduate.

Don Flinn, in his early forties at the time, taught me, along with the rest…how to write, to be bold in expressing, and supporting, an opinion;  because he was opinionated!  His class was a study in frustration for many, because in Flinn’s own words, “There is no good writing.  There’s just good re-writing.”

And he meant every word of that because, with few exceptions, when you turned in an assignment to him you soon got it back with the directive to “Do it over.”  Again, and again I’d turn in papers to Flinn who would mark them up with a red pen and summarily hand them back.  His class – his acceptance – became a personal challenge.

“I took teaching senior composition very seriously,”  he said to me recently.  “I knew most of the kids in your class were college-bound and freshman English was a flunk-out course at most schools.  In fact, there used to be a joke about going to the first day of class and the professor saying, “Look to the person on your left and look to the person on your right.  A lot of you won’t be here after this course.

“So, I tried to prepare you as well as I could.  I don’t know what they do now, but back then I took it seriously.”

But no more than I, and once I became accustomed to Flinn’s demanding standards …’writing’ came easy to me.  Freshman English at Ohio State was nearly an automatic ‘A’, because he had taught me what to anticipate with a given assignment and how to write accordingly.  By my sophomore year I was taking upper level (junior and senior) courses to pad my grade point average, because I wasn’t nearly as good in math and science. 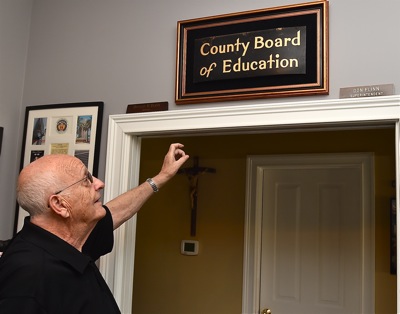 People in Shelby County will remember Don Flinn, where he taught and served as principal at Houston…and later took the position of county superintendent of schools.

Prior to Piqua Flinn had lived in Shelby County, where he taught and later served as principal at Houston High School.  And later, he took the position as county superintendent in Shelby County before retiring from public education at age 57, in 1988.  For the next ten years he taught freshman English at Edison State, where his standards were as much a surprise to college students as they had been to me in 1970.

“It wasn’t good,”  he says without hesitation.

After Edison it was time for personal travel and life gratification.  He and wife Peg have traveled the world, recorded much of it in photographs, and not surprisingly…he’s written a book about his life in typical meticulous detail that made me want to ask, “How many re-writes did THIS take?”  In it is Don Flinn’s life – adolescence, military service (Army), college degrees, schools, colleagues, friends, and yes, even a hall of fame of past students.  From Piqua there were two that caught my eye – Dave Gallagher, and me.

“You made my hall of fame,”  he said with a chuckle as he shared the inch-thick book with me.  And beside my graduating photo from the 1970 Piquonian he’d written, “Bright kid and a good guy.  I admire his energy and enthusiasm.”

He’ll turn 86 next month, and except for the wear and tear that comes with four score and five years he looks great and lives comfortably with Peg in Vandalia, where they’ve resided for the past fourteen years.  As for his 30-plus years in education he looks back on them now with no regrets, or worries about his future or what lies ahead next for public schools.

“I figure at my age state teachers retirement (STRS) will outlast me,”  he laughs.

And before I left him I had to ask…how many of his former students went on to pursue writing in any capacity?  After thinking about it for a moment he said, “Just you, far as I know.  I must not have been THAT good.”

Au contraire – to the contrary.  To the man who opened that door of possibility I could not be more grateful, notwithstanding fifty years of biding my time.  Thank you, Don Flinn, for being the right guy, at the right place, at the right time;  because in the end…even one man’s hall of fame is better than no hall of fame at all.

For teaching me that there is no good writing.  There’s just good re-writing! 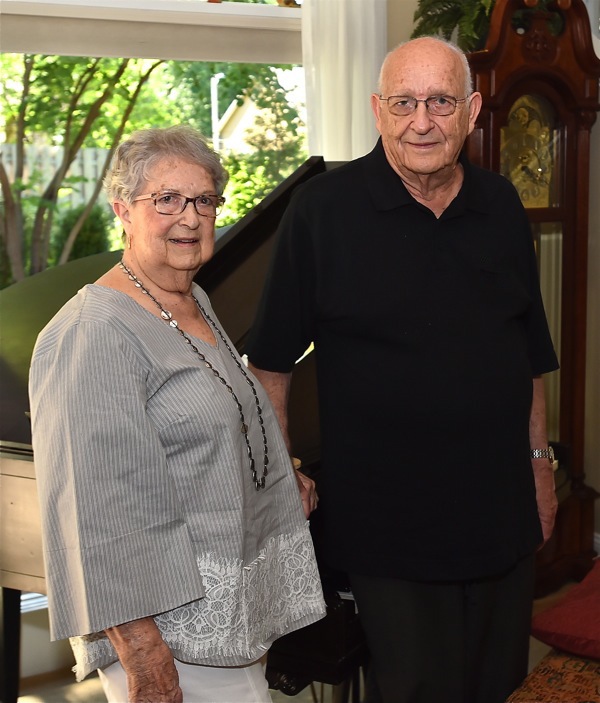 With wife Peg (above), Don Flinn somehow turned me on to writing as a high school senior and opened a lifetime of future possibilities. (Press Pros Feature Photos)