Tales From The Bush Leagues…..

It was the longest game I ever worked as a minor league umpire, and I remember it not for who ultimately won it, and how, but for the characters who took part in the game…and suffered more than I.

From time to time over the years I’ve shared some stories from my days as a minor league umpire, from 1975 thru the ’82 season, and seven of the best and most interesting years of my life.

For a guy that liked baseball, and just being around the park – the game – there is nothing in this life that will take the place of those years, those miles, and those memories.

I actually kept a diary back then, or wrote down a lot of stuff on a legal pad, and when I came home each fall I would toss the year’s chronicle in a trunk I kept in the attic.  Those pages are still there, and once and in while I look through them;  mostly now when I hear that someone has died.

But when a recent big league game went 16 innings a couple of weeks ago, I remembered another game that went 16, years ago in Wichita, Kansas, in the middle of July, and when I went to the trunk there on yellowed sheet of paper were the details of that particular game – the longest game in which I played as a player, or worked as an official.

The reason you remember games like that as an umpire is…that I worked the plate that night.  And the reason I remember working the plate was the heat.  Wichita in July is so hot you you can’t breathe back there wearing all that gear.  So I sat down to read the accounts I had written.

The game was a weekday game in mid-July, 1980, between the Springfield Redbirds, the AAA affiliate of the St. Louis Cardinals, and the Wichita Aeros, the AAA affiliate of the Chicago Cubs.  It was played at old Lawrence-Dumont Stadium, a rickety place badly in need of the essentials – like lights in the outfield and working toilets – and on a good night in Wichita a AAA baseball game back then might have attracted a hundred people.  The Aeros weren’t very good, and it was just too smokin’ hot.

My notes state that the daytime temperature in Wichita that day reached 107 degrees, and by the time we exchanged lineup cards with the managers at 7 pm it had dropped to about 105.  The one modern feature of Lawrence-Dumont Stadium was…Astroturf on the infield (the outfield was regular grass), of all things, which absorbed heat during the day and radiated it all night.  So even when the sun went down there was no relief.  It was still miserable, and players complained of blisters through their shoes. 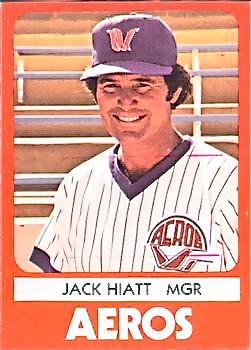 Jack Hiatt was the Wichita manager – a good guy – who was, shall we say, fastidious about his appearance.

Jack Hiatt, the old catcher with the Giants and the Astros, was the Aeros manager, and I always remember Jack for the two things.  He always had a fresh haircut, and he always smelled good.  Whatever the newest, popular, cologne was, Jack would be wearing it.  He was a funny guy, with personality, and one very good with umpires – principally because he had caught for all those years.

Hal Lanier was the manager of the Redbirds, another ex-major leaguer with the Giants, who always walked like he had sore feet.

The only thing I remember about the game itself was…no one scored.  It was an easy game to work.  The two starting pitchers threw well, I called a lot of strikes and the game zoomed along.  Both pitched into the ninth inning, and then the Aeros brought in Lee Smith, all 6’5″ inches and 230 pounds, and his 98 mile per hour fastball.  Geezus…he threw hard, and years later he would retire from baseball with 478 big league saves.  He pitched the next five innings, into the 14th.

The Redbirds didn’t have a Lee Smith, but they had a guy named Hector Eduardo who threw almost as hard, along with a future big leaguer named George Frazier, and another named Donnie Moore.  Those three took them from the tenth to the end of the game, before Springfield finally won it on an unearned run, 1-0.

The issue, of course, was the heat, exacerbated by both teams’ inability to create any offense.  It was particularly hard on Springfield catcher Glenn Brummer, who at one point came out of the catch in the 14th without a chest protector.

“Glenn,”  I reminded him, “you forgot your chest protector.”

“Screw it,”  he fumed.  “It’s too damned hot.”  And he was a pathetic looking soul, his uniform long-since soaked through and caked with dirt from around home plate.

“I don’t have a spare uniform,”  he said.  “We only brought one set for this trip.”  Someone convinced him to go get his chest protector.

Hiatt was more forward-thinking, and had the advantage of being the home manager.

“I showered in the tenth while we were in the field,”  he admitted to me in the eleventh.  “Can you believe this?  Those guys are suffering over there and we still can’t win.” 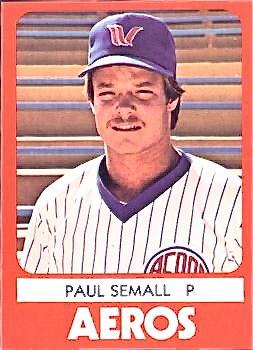 Former Buckeye and my teammate at Ohio State, Paul Semall was the hard-luck losing pitcher.

Wichita had some pretty decent players, including Karl Pagel (brother of NFL Colts’ quarterback Mike Pagel), who would go on to have a fine big league career with the Cubs.  But that year…they were pathetic.

“We’re actually better on the road than at home,”  Hiatt told me later in the year.  “But then we start thinking about coming back home to this ball park, and I think we get depressed.”

I never personally saw one, but players told me about chasing armadillos in the outfield before batting practice, and there was sign behind the center field wall from a men’s clothing store in Wichita that said “Hit me and win a new suit”.  The problem was…the sign was in dead center field and about 40 feet high.  Someone measured the distance once and found out that it was 570 feet.  No one ever came close, and the store never had to pay.

Ironically, the Redbirds won it in the 16th off a pitcher named Paul Semall, a college teammate of mine at Ohio State, who gave up a hit, and then threw a perfect double play ball that Wichita’s infield bungled, moving runners to second and third.  Then, with two outs, Springfield hit a ball to the center field that was lost in the lights and landed about 30 feet behind the centerfielder.  That’s how the winning, and only, run scored.

I felt bad for my old teammate (who was 0-7 for the season), but Hiatt took it all in stride.

“Hell, I took a second shower,”  he admitted.  “I’m fresh.  Let’s play.  I could’ve gone on.” Tomorrow, in professional baseball, is another day, another game. 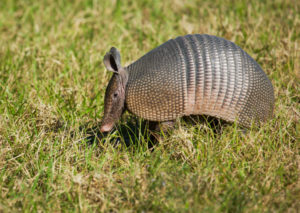 You don’t see armadillos at a Dragons’ game…but apparently they had ’em in Wichita.

Worse, it was get-away day and we missed our flight to Denver that night for the next day’s game.  So after the game my two partners and I went to the airport, flashed our league credit cards, and were three of only seven very well-hydrated passengers on a 5:40 am Braniff flight.  No wonder that company (Braniff) went out of business.

I saw Jack Hiatt years later scouting for the San Francisco Giants.  He was their assistant farm director, I think, and he still remembered and laughed at those days, and those stories, from Wichita…the heat, the “hit me and win a suit” sign in center field, and the fragrance of the day.  It was Pierre Cardin, back then.

Trust me.  There’s simply no sport…with stories to match baseball. 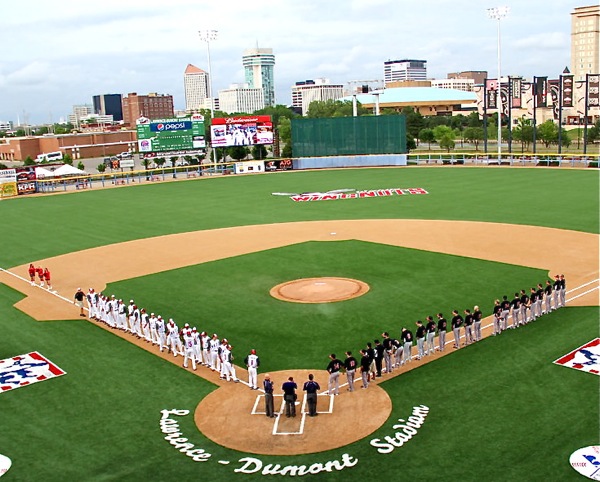 Since 1980 they've made a lot of improvements to the stadium in Wichita, and the apparently the team is now called the 'wingnuts'. The clothing store sign stood to the left of the batter's eye and 40 feet above the ground. (Press Pros File Photos)