After 37 years Northmont High School’s Chuck Harlow is stepping back from coaching.  Tough loss for T-Bolts, even though there’s a time for everyone.  But an even greater loss for area baseball.  Here’s why.

It’s hard to say what I want to say about Northmont baseball coach Chuck Harlow in just 500 words, because he certainly deserves more.

In 37 years and with a career the likes of his accolades – the respect – stacks up.  But words aren’t adequate anyway, so why be James Michener?

But I’m going to try, because while the announcement this week that he’s retiring isn’t surprising…it’s a sad milestone for area high school baseball.

Chuck Harlow won 700 baseball games…and probably ranks with the top twelve coaches of his era that I’ve personally known, despite never having won a state title in all those years (3 at Dixie and 34 at Northmont).  When I think of Harlow I think of Jim Hardman, Frosty Brown, Rick Gold, Mike Wiss, and Tim Engleka in this area, along with Tom Held (Defiance), Tom Randall (Springfield), Chris Hardman (Ottawa Hills), and Vince Chickerella (Linden McKinley) from other parts of the state.  Every one of them is a state hall of famer, deservedly.  And like Harlow, some of them never got the attention they deserved because of they never won it all!

But in Chuck’s case it was a matter of how he won those 700 games.  And I think (I could be wrong) he reached the regional finals one time before absorbing the fate of every other Division I Dayton school.  To get to Columbus you had to beat someone out of Cincinnati – a Moeller, Elder, and the like.

His teams always looked like state champions for the way they played the game.  They pitched well.  They hit well enough, and when they didn’t they won with pitching and defense.  They wore their uniforms the right way.  And the baseball field at Northmont, back a winding road and tucked into the woods, was always manicured to represent the pride with which Harlow and the T-Bolts played the game. 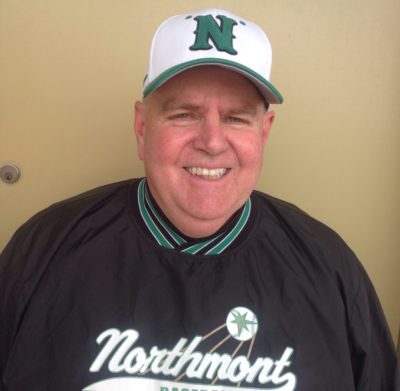 “He coached with so much energy and enthusiasm,”  said former Piqua coach Rick Gold this week.  “He always attracted kids to his program with his attitude, and his teams were always sound.  They did the little things right.”

That attitude always included a handshake and a smile – and an appreciation for an opponent, regardless of size or division.  A lot of lip service is give to the phrase “respect the game”.  Harlow gave it credence.

We’re about the same age, actually, and while I haven’t written a T-Bolts game in a couple of years I will remember him as one of the iconic coaches that have now come and gone at Northmont – Ned Booher and Lance Schneider (football), Jim Brown and Jim Ehlers (basketball), and now Chuck Harlow.

And, I’ll remember his hospitality.

“You need anything?”  Chuck would ask when you showed up for a game.

By word count I’ve gone over 500, 535 to be exact, but Chuck…you deserve it.  And thanks for what you’ve done for baseball.

Now…let ‘me’ know if you need anything.