They are the curiosity factor of the regional tournament, but the Buckeyes are enjoying the atmosphere and attention…and they’re confident that they belong.

Greenville, NC –  Without question, they were the elephant in the room during Thursday’s pre-tournament workouts at East Carolina’s Clark-LeClair Stadium.

And yet, there were plenty of questions.

How can you play baseball in the cold weather that you have ‘up north’?

Do they (the Buckeyes) feel disadvantaged by being in a regional with three teams from warm climate?

How do you deal with all the rain-outs you get up there (in the Big Ten)?  Someone answered, “We have snow.  We don’t have rain.”  The “snark” was priceless.

Are the Buckeyes just happy to be here, given the other three teams – East Carolina, South Carolina, and UNC-Wilmington – have 113 wins between them?

“No, I think these guys are here to win,”  said WBNS play-by-play voice Matt Andrews.

This was the theme of Thursday…as the Buckeyes dodged humidity and sporadic rain to get in a good ninety minutes of work.  The consensus:  The facilities at Clark-LeClair are beautiful.  The natural playing surface is ‘bent’ grass, like you find on golf greens.  The ball really flies in the hot humid air.  And the 5,000 seats are all sold out for the three days of the tournament.  The atmosphere promises to be memorable.

And then this:  The Ohio State Buckeyes are perfectly comfortable in their own skin.  To a man…yes, they’re happy to be here.  But to a man…they also feel they belong here. 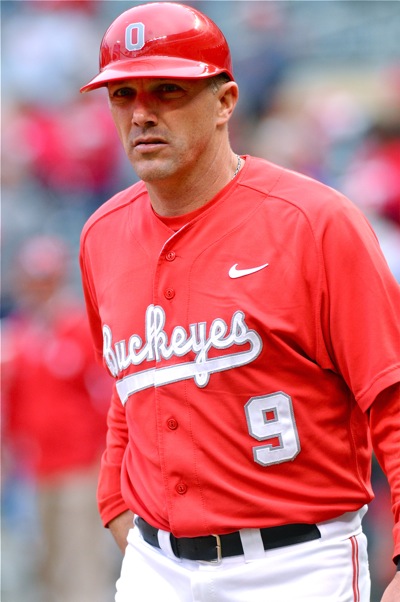 Greg Beals is satisfied that confident, clean baseball will put the Buckeyes in a good position.

The Gamecocks are taking no chances.  Altering their normal pattern of taking batting practice off a 92-mile-per-hour pitching machine, they hit off left-handed pitching coach Skylar Meade, formerly of the Michigan State Spartans, to simulate the offerings of Buckeyes lefthander Conner Curlis.

But his words resonated with ‘coach speak’, as reporters and everyone else seems more curious than respectful of the Buckeyes’ 36 wins, .286 team batting average, and 4.58 staff earned run average.

“We’re not concerned,”  said senior co-captain Adam Niemeyer.  “We’re confident and we feel like we can win this regional.  We’re not happy just being here.  We want to come out, play some good baseball, and hopefully string a couple of good games together.  We’re focused on winning a regional.”

Niemeyer’s recent outing against Michigan in the Big Ten tournament seems to signify a confidence of being able to play their best when clearly their best will be demanded.

“It was nice to go out and help our team be in a position to move on,”  he added.  “Hopefully I can do that again this weekend against whatever team we’re facing.  Last year was tough, and the fact of coming back from 20 wins to be in the NCAA tournament is huge.  When you’re winning everything is better.”

And that’s the mood as they board the team bus for this afternoon’s 2 pm start.  The weather is predicted to be humid, but clear.

Phoenix is proud to congratulate the Ohio State Buckeyes on their NCAA regional tournament appearance.

With Curlis they talk about his ability to execute pitches – 73 strikeouts and 29 walks in 82 innings.

With Hill they talk about velocity, strikeouts and domination – 92 Ks in 75 innings, but with 46 walks, as well.

Make no mistake.  This is a big deal, but it’s still a matter of playing well, and clean, as Greg Beals is oft to say.  They’ve done it before…against Southern Miss, Coastal Carolina, and yes, against UNC-Wilmington.

And the best thing is…they’re confident they can do it again! 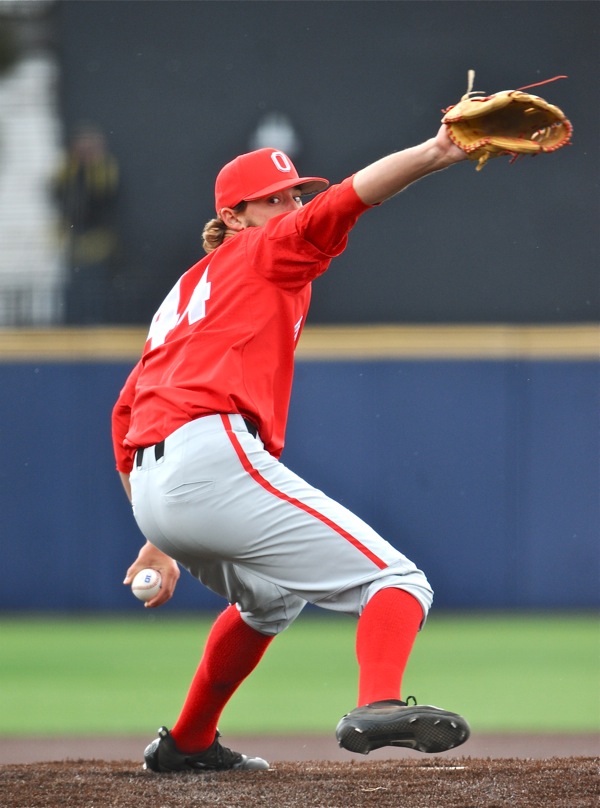