Cavaliers score five in the first and drop the run-rule on Minford to advance to Division III state final game.

By game’s end there was no breath left in Minford, which had lost only two games all season. Their third defeat was a beatdown as Coldwater scored an 11-0 victory to advance to the state finals for the 19th time.

“We took advantage of a team that, I don’t want to say they weren’t ready to play, but we had more confidence,” said Coldwater coach Brian Harlamert. “It is confidence and it is swag, but respect the opponent. That’s the mantra of our program.”

Minford starting pitcher Elijah Vogelsgang-Lewis retired the first Coldwater batter, then five of the next Cavaliers crossed home plate for a 5-0 getaway.

A botched double play ball by shortstop Nathan McCormick would have ended the inning with no runs, but he fumbled the ball and the inning continued. Vogelsgang-Lewis put himself in jeopardy by walking two straight batters before the error.

The big blow of the inning was a two-run single by Seth Miller and the Cavaliers pour it on from there until high school baseball’s version of the TKO was invoked, at least a 10-run lead after five innings.

After the five-run first, Coldwater knocked Vogelsgang-Lewis out of the game in the second inning with three more runs. 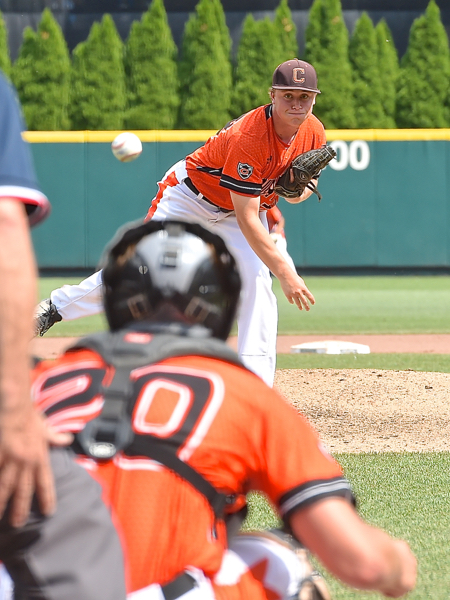 Coldwater pitcher Brad Giere kept Minford’s bats on mute, no runs on two hits and one walk over his five innings.

Meanwhile Coldwater pitcher Brad Giere kept Minford’s bats on mute, no runs on two hits and one walk over his five innings as the Cavaliers pushed their record to 27-6. Minford, a school in Scioto County that plays in the Southern Ohio Conference, finished 24-3.

Coldwater’s Harlamert began the game with the thought process of holding Giere to under 50 pitches. And he made it, 48 pitches, with the five-inning run rule saving him.

“He was coming out at 50 because the bottom line is we came here to win two games,” said Harlamert, indicating that Giere would be ready for bullpen duty in Saturdy’s final.

Asked who would start Saturday, Harlamert answered quickly. “For sure it will be Cole Frilling,” he said. “He is our 1-A. He is 7-and-4 and he had three tough losses. We’re coming in with Giere and Frilling both ready to go.”

Harlamert, in his 21st year at the Mercer County juggerenaut, displayed post-game empathy for the new kids on the block, a team that left Huntington Park with badly skinned knees.

“That huge first inning showed our team was ready to play, the process of team toughness,” he said. “I don’t know if their guys were a little nervous, but our guys sure weren’t. We’ve been here enough to show our experience and our toughness. The bottom line is our total program, our summer program, is huge. Our kids believe in that. 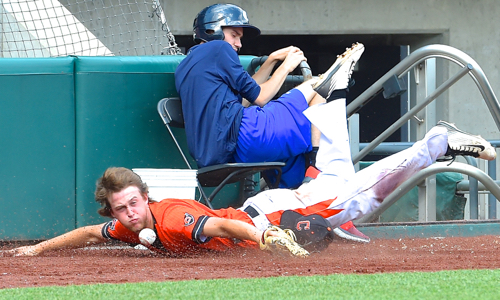 “It’s never easy, not to come this far,” said Harlamert. “Brad Giere had a very efficient game on the mound and our seniors stepped up. Our pitching and defense has won a lot of games for us, but in this one we were able to put a lot of early pressure on them.

“We got that gift in the first inning on that ball that could have been a double play,” he added. “That error gave us five runs in the first.”

Offensively, the Cavaliers sprayed 10 hits around the premises, three by second baseman Sam Broering, who also scored three times. Shortstop Jake Wenning had a hit, a pair of walks, scored two and drove in one. Center fielder Jack Muhlenkamp had a hit, scored two runs and drove one in.

Indeed, the Cavaliers had one of those days, a good time was had by all. But Harlamert knows how to keep heads on straight.

After the celebrating was over and the team was milling around in the dugout, Harlamert said, “Hey, guys, lot of baseballs laying around in here. Let’s pick ‘em up. Let’s go, let’s go.” 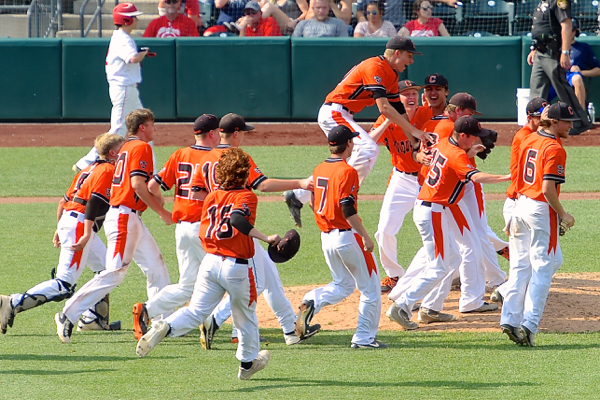 Coldwater will play for their seventh state title on Saturday after beating Minford 11-0. 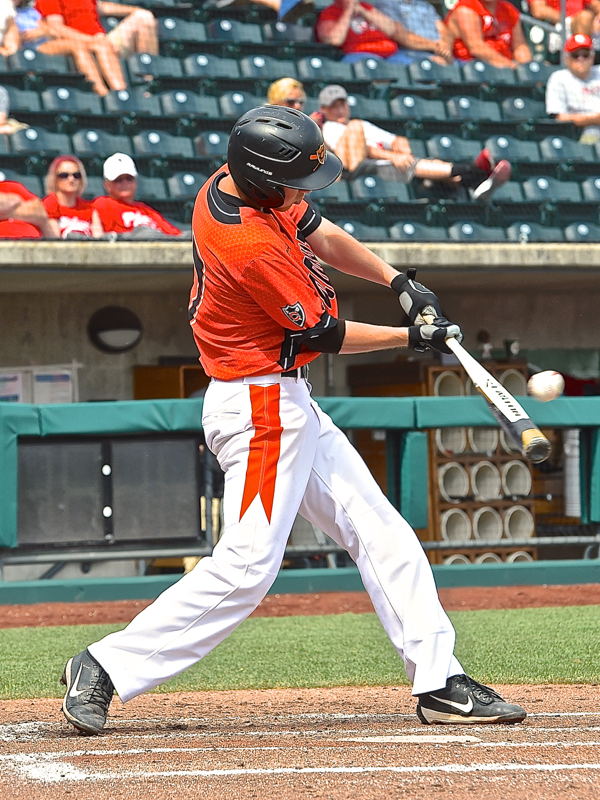 Seth Miller started the run rule rally with a two-run single and the Cavaliers poured it on from there. (Press Pros Feature Photos By Julie McMaken Wright)