How I Learned To Appreciate ‘Memorial Day’…….

Memorial Day means different things to different people.  But to me, I’ll always remember how I learned at any early age to observe the day…and why! 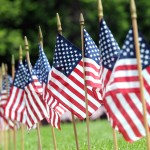 Gettysburg, PA  – Like many of you, I have my bucket list.  Not just things you have to do before you die…but I have things you do on a yearly basis, as well.  They HAVE to be done!

You see, there are certain things we all do out of a sense of personal obligation, and on this Memorial Day weekend…even as you read this I’m marking another off my annual list.

Since early childhood I’ve learned to pay tribute each Memorial Day not only the American servicemen, but I bow to the teaching of my ancestors, as well – my maternal grandmother, Ethel Kite Simpson specifically – who first taught me about “Decoration Day”, what it meant, and why it was so important to her.

You see, before there was Memorial Day the old people of Ms. Simpson’s generation referred to the holiday as “Decoration Day”.  And to my surprise, occasionally you’ll still find a person in their 80s or 90s who still use the term in addressing the day set apart to honor the American servicemen who’ve given their lives to preserve the American way of life.  Originally, the day that we now call Memorial Day was set aside in 1868 specifically to honor the dead and wounded of the Civil War.

And people of that generation took it seriously.  “Decoration Day” to them meant that you honored those who had been to war and sacrificed;  and my grandmother had an uncle, Private Joshua Kite, of the 7th Virginia Infantry (Union), who fought for three years in the Union Army, from 1861-1864…and “saw the elephant”, as he would later tell to interested listeners. 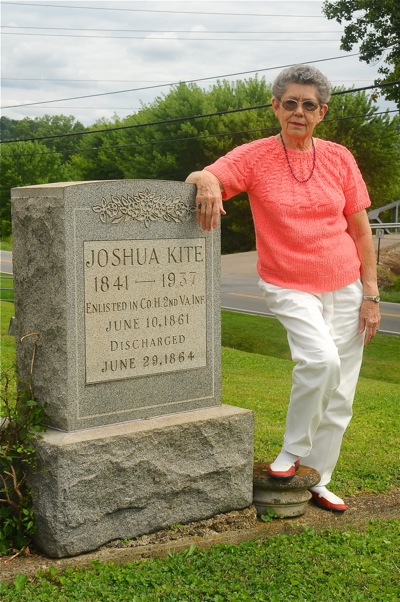 My mother, pictured at the monument of her great uncle, Joshua Kite, a Civil War vet who died in 1937. Mom was a little girl at the time and attended his funeral at Getaway Methodist cemetery in Getaway, Ohio.

Mr. Kite survived the war, and in fact lived 72 years after the war and loved telling those stories of fighting against Stonewall Jackson at ‘Second Bull Run’.   He died of a heart attack in 1937 (95 years old) when my mother was 12 years old, and she still tells about attending his funeral and burial in Getaway, Ohio.  His memory and service was well known to the community and my grandmother honored him each “Decoration  Day” by placing flowers, usually white dahlias if she could find them, on his grave.

After going to the cemetery, we’d then go back home, or visit someone in the community, for a big fried chicken lunch in honor of the day;  but not all day, mind you.  As soon as lunch was over if weather was permitting there would be hay to bale or corn fields to cultivate.  “Decoration Day” had its priority,  sure enough, but there was still work to be done, even on a national holiday.

As generations passed the holiday became known as “Memorial Day”, and honored all the American servicemen, especially those who fought in wars after the Civil War.  And while I recognize it as “Memorial Day” today, because of my grandmother I still think of it as “Decoration Day” – set aside one hundred fifty years ago this year to honor our nation’s ultimate heroes.

It’s hard to explain to those who don’t understand, but for many years now I’ve made it a point to be at Gettysburg on Memorial Day, the best-known of all American battlefields, to observe the honoring of those who fell on that field during the three days fighting of July, 1863 – all 58,523 of them!  I’ve shared that tradition with my children, Matt and Laynie, and when they can they come with me. 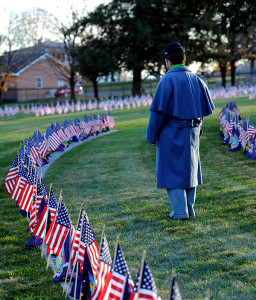 The national cemetery at Gettysburg is part of Evergreen cemetery, a war-time burial site for residents of the community, and the site of Lincoln’s famous address, thereby consecrating the grounds to honor Gettysburg battle dead in November of 1863.

If you haven’t seen it, it’s impressive.  The National Park Service places an American flag on the grave of each fallen soldier, known and unknown, and many Americans who especially identify with the Civil War and Gettysburg make an annual pilgrimage back to recognize and honor those, who in Lincoln’s words, “gave the last full measure” to preserve the American way of life.

I’ve been to Gettysburg a hundred times, but I think it’s best on “Decoration Day”… and something that every American should put on their “bucket” list.  And if you’re anything like me (and you’re probably not) you might find that you want to go more than once.  It makes that kind of impression.

It’s sobering, and it gives you a proper perspective when you think of those 19th century soldiers that fought and died without even so much as decent medical attention;  and they did it for meager government pay.  Mr Kite shared after the war that the most he ever made as a member of the Federal army was $13 a month.  So I think of my grandmother this morning, and her annual commitment to honoring their service, now nearly 50 years after her death.

And I’ll also add…my thanks to all those who have served our country, especially those who’ve given their last full measure, knowing that my words cannot adequately express the sentiments of those who’ve lost loved ones in the most recent wars.

They, not those who criticize the monuments and memory of history, are the ones who have my respect.  They are the ‘mortal’ monuments, safe forever more from blaspheme and scorn.  And never greater than on “Decoration Day”.   Here is where it all began, by the act and words of Abraham Lincoln – the tradition of honoring America’s service dead.

Need I, or anyone, say more.  God Bless America! 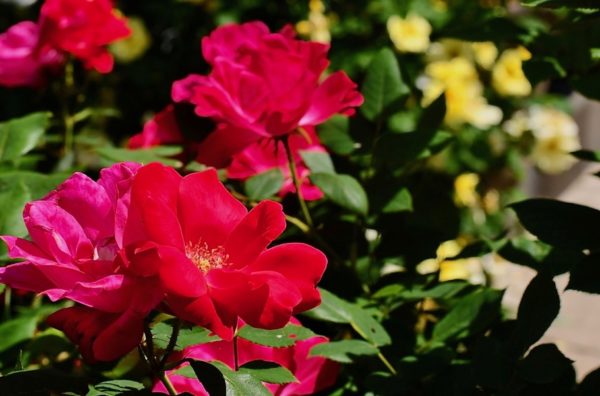 And yes…let summer begin! Roses from a yard on Baltimore Street in Gettysburg signal the warmth and optimism of summer. 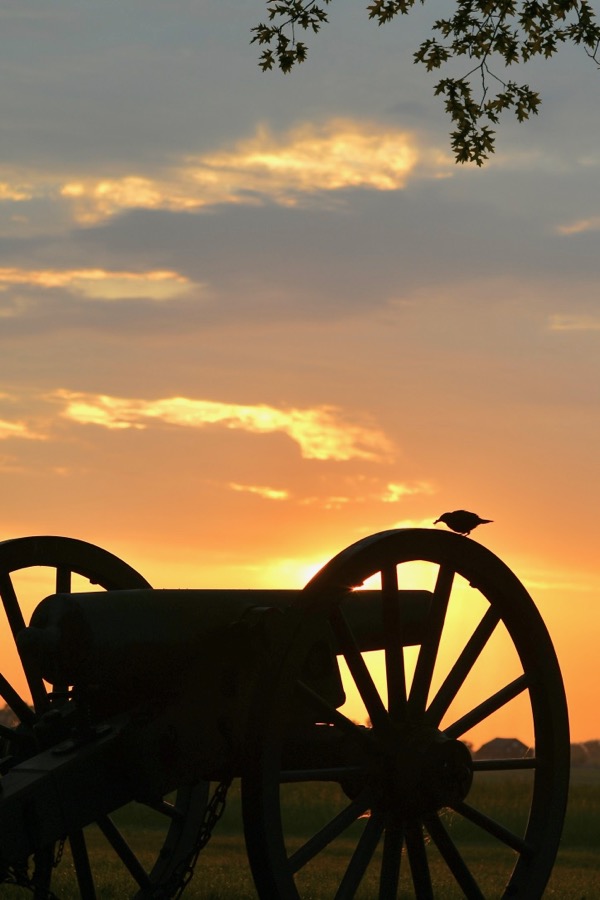 Sunrise on liberty....Silent now, but the guns at Gettysburg serve to remind that there's always been a price to pay for the American privilege of life, liberty, and the pursuit of happiness. (Press Pros Feature Photos by Sonny Fulks)