If you blinked you probably missed the high school baseball season.  But now it’s tournament time, and as predicted five area teams are in the regional round.  And more, Ohio State plays Purdue on Wednesday in the Big Ten Tournament.  Good stuff…read on!

If you haven’t noticed, I’m opinionated, and in particular I have a soft spot for kids who like to play baseball.  So the fact that it’s regional tournament week already – and no one seems to know – I wonder if we’re all doing enough to respect that ‘particular’  game and whether we’re doing as much as we can for the sake of ‘those’ kids who play.

Here’s the point…if you asked high school football in Ohio to get prepared for the state championship with just six short weeks of preparation there’d be a cry unlike you could imagine.  I’m pretty sure the state legislature would get involved (because they would have so much to offer) and there would be a huge community protest over ‘fairness’.  It’s football, and we have to get it right.

Baseball, on the other hand, seems to be something that needs to get done as quickly as possible so we can get on with graduation, summer vacation, AAU basketball, and lifting for football.  And pity the poor kid who plays,  who’s waited all year for his sport to be relevant.

Argue if you want, because I’m dying to hear.

However, we’re here, and as I suggested ten days ago five of the teams that I predicted are on the brink of qualifying for the state tournament in two weeks.  Russia, Minster, Coldwater, Loramie and Tipp are all engaged in the regional round of the tournament.  And congratulations to Troy on a tremendous run, only to get knocked out 2-0 in extra innings last Friday.

More, Ohio State has qualified for the the 2018 Big Ten Tournament as the seventh seed, and will play Purdue (#2) on Wednesday at 2 pm in the opening round.  More on that in a minute.

If you’re asking me which of the high school teams in Divison III (Coldwater) and IV (Russia, Minster and Loramie) I like….that’s hard.  But frankly, I like Russia’s pitching from what I’ve observed in those six short weeks of baseball season…and I believe that they’ll hit the kind of Division IV pitching they’ll see this weekend.

I also like Minster because they’re the defending champs, they’ve seen the elephant, and Mike Wiss has been coaching this sort of things for decades.  I believe there’s a comfort issue with playing under pressure.  And that matters, believe me.

Loramie has wonderful young talent, but behind Jared Middendorf I’m not as sure about the depth of their pitching;  but I said the same thing to Bill Sturwold in 2007 when he won it all with a soft-throwing lefthander named Andy Long.

If you’re talking about Tipp, I love the depth of their pitching, as usual.  Over the past twenty years no area teams has had better.  The question has always been their ability to hit unfamiliar pitching outside the Central Buckeye Conference.  I’ve seen some very pedestrian hurlers tie them in knots at the district and regional rounds, whether it be talent or nerves.  My question with Tipp has always been…will they score?

And, for the fact of their six previous state titles and the grand tradition of baseball in Coldwater, the Cavaliers this year are my darkhorse.  Their #1, Josh Frilling, can compete with any Division III opponents he runs up against, but like Tipp, I wonder if they’ll score enough runs under the pressure of regional tournament baseball?  But that’s why they play, and why we’ll all be anxious to learn come this weekend. 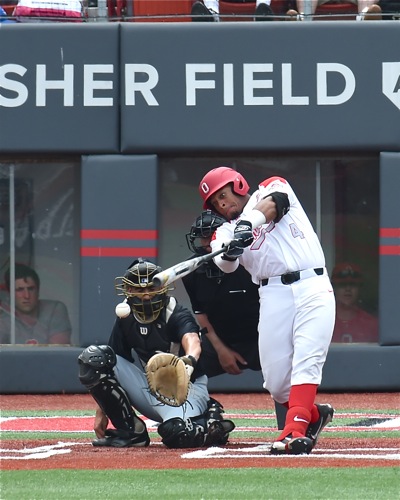 Noah McGowan (above) and Ohio State meets Purdue in the opening round of the Big Ten Tourney on Wednesday, after taking two of three from the Boilers two weeks ago in Columbus.

Many of you have shared that you’ve enjoyed our coverage of Ohio State and Big Ten baseball this spring, as we’ve seen the Buckeyes live in the majority of their games played thus far.  And, we’ll be in Omaha with them, as well, when they take on Purdue in the opening round on Wednesday.

At that level of baseball it’s not so cut and dry.  Pitching and defense, like in high school, is of paramount importance.  But other things play a big part, as well.

Matchups, pitching against hitting, are on the minds of every coach.  How do you pitch to a Bren Spillane (Illinois) who has hit 22 home runs and has 55 RBIs in just 56 games?

How do you conquer your weaknesses, like defense in Ohio State’s case, against a team like Minnesota that rarely makes an error and is usually flawless in their overall execution?

And with 56 games under your belt in a short twelve weeks, how do you manage what must be some tired arms in your bullpen?  Or, some tired psyches with the rest of the roster?

The Buckeyes missed a golden opportunity last weekend to enhance their confidence and chance for an at large NCAA bid when they dropped two of three at Michigan State, a 20-30 team overall, and 11-12 in  Big Ten play.  Having lost four of their last five their confidence, I’m sure, they could use a boost.  You don’t want to go to Omaha with that taste in your mouth.  But they’re not alone.

Michigan, the #3 seed in the tournament, has likewise lost four of their last five and got swept over the final weekend by Purdue.  This is the same Michigan who played the first month of the Big Ten season without losing a game.

And Illinois, which lost it’s season finale on Sunday to Nebraska, missed valuable seeding opportunity by doing so and is bound to have some of the same doubts about confidence.

But in the Buckeyes’ case, they won their regular season series against Illinois, Indiana, and Purdue (all higher seeds)…and played Minnesota tough while dropping two of three.  So it isn’t like they’re not familiar with the task.  The pressure is just higher now.  There is no tomorrow, despite it being a double elimination tournament.

I personally think the next two weeks is two of the best in the entire school calendar year.  Great competition, good weather, and high anticipation.  I only wish that it seemed to matter more to those to which it should matter more.

Or else, let’s try to wrap football up next fall by the end of October. 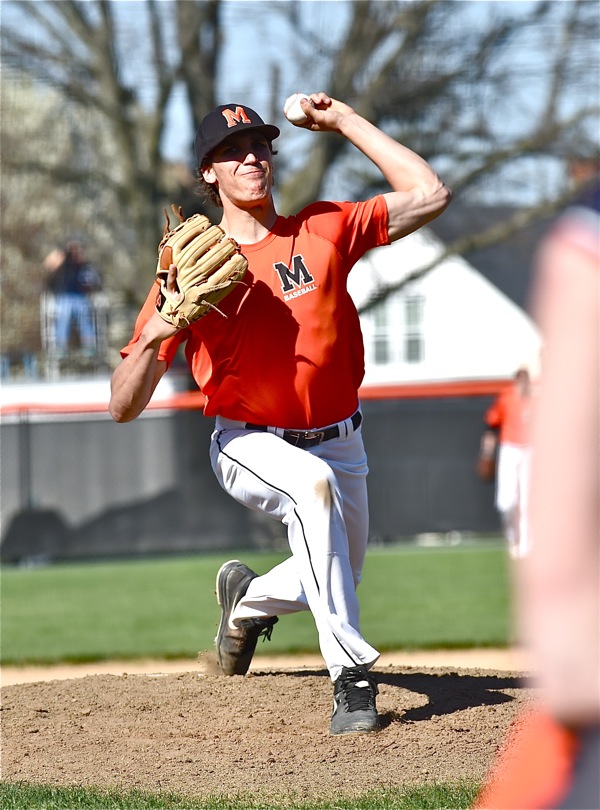 In Division IV Russia has been impressive, but don't for get defending champ Minster and Austin Brown (above), who survived the wildest win yet, 14-13, in the district round. (Press Pros Feature Photos)