Three unearned runs in the bottom of the seventh spelled doom for the Buckeyes…they drop game two of the weekend series with Sparty, 3-2.

Except for a Chad Roskelly solo homer in the bottom of the first;  and a two-run laser shot by catcher Adam Proctor that landed in another zip code in the bottom of the fourth…starter Ryan Feltner was having an efficient day, commanding his fastball and turning in what would later be determined as a quality start.

For in fact the Buckeyes jumped out early for the second day in a row, scoring a run in the top of the first on a Kobie Foppe walk and a Tyler Cowles RBI double, only to see Roskelly trump that with his homer in the bottom of the inning.

But all things considered, it had the feel of a good day.  Despite empty opportunities from the offense in each of the first three innings, the defense, so often the one questionable element of their season and 34-17 record,  was turning in plays.

Noah West, at shortstop, sparkled in the first.

Kobie Foppe, at second, made a fine play ranging into short right field in the second.

And Noah McGowan, at third, turned an apparent single in the hole into a routine out at first base in the fourth.

But as the clouds rolled in and the skies became ominous with an approaching weather front, so too, did the fortunes of the afternoon.

In the top of the seventh Kobie Foppe doubled against Spartan reliever Mitchell Tyranski, followed by a McGowan single that drew the Buckeyes to within a run at 3-2, and opened options for a late-inning comeback.  They had ’em right where they wanted ’em, figuratively.

But in the bottom of the inning some old habits emerged…a pair of errors and three unearned runs.  Back to back singles by Bryce Kelley and Justin Antoncic put runners at first and second with one out.  A moment later a double steal put them at second and third and forced Ohio State to bring in its infield.  The next hitter, Chad Roskelly, hit a tailor-made ground ball to Kobie Foppe at second…who got to it, got his hands on it, but played into their 83rd error of the year and an unearned run as Kelley scored from third.

With two outs Griffan Smith replaced Feltner to pitch to lefthanded Adam Proctor…and hit him with a pitch.  Then, with Zack McGuire at the plate, two outs and the bases loaded, Jacob Barnwell attempted a pickoff at first and threw the ball behind Bo Coolen and into right field.  Two more runs scored (unearned), and as it would turn out…that was the old ballgame. 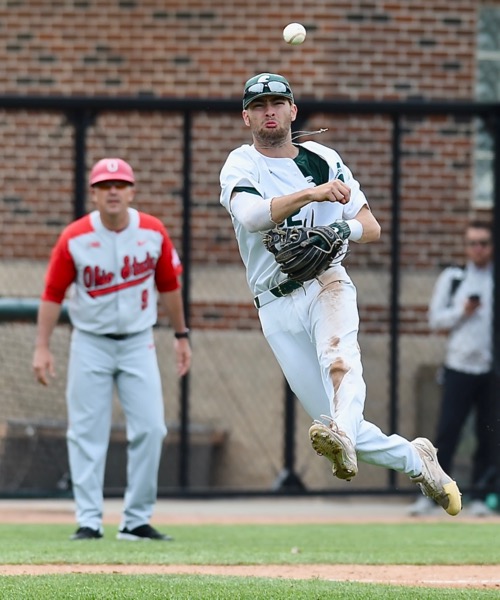 Diamond gems…as Michigan State third baseman Zach Iverson turned in a dandy in the top of the fourth.

In perspective, the two errors in the seventh were the more glaring of lost opportunities, as the Buckeyes left those runners on base in each of the first three innings – two in the first, one in the second, and two in the third.  For want of a base hit, the seventh inning might not have figured at all.

“I thought Feltner did a good job for us.  He gave up the two home runs, but he got us into the seventh with a chance,”  said Greg Beals.  “The three runs was a quality start for us.  But we have the play in the seventh, we have the infield in and we get the ground ball right at our second baseman and we weren’t able to make the play.  That ball gets through us and it ended up being the deciding point of the game.”

And, it brings into play the series finale on Saturday as the Buckeyes seek to win the final series of the year and pick up momentum (and seeding consideration) for next week’s Big Ten Tournament.  Adam Niemeyer gets the ball on Saturday as they seek their 35th win of the season.

“We had our chances early,”  Beals admitted.  “We had runners on base and the bases loaded at one point with one out and didn’t score.  We missed a 3-1 fastball and a 3-2 fastball and usually Tyler Cowles capitalizes for us in that situation.  It just didn’t happen, and that’s baseball.

“But we made some plays today, good plays, overall,”  added Beals.  “When you look at the scoreboard and you see the three errors you immediately think the defense let you down, and it did at a critical point.  But we also made some really good plays behind ‘Felt’ today.”

Whether or not they get the opportunity to finish on a high note may well be in the hands of Mother Nature, with the local  forecast saying there’s 70% chance of rain on Saturday at 1 pm.  They’d like to play – Adam Niemeyer would like to play, and have one more crack at it.  It may sound trivial…but 35 and 19 sounds so much better than 34 and 20.  Little things mean a lot at this point – like RPI, ERA, and one seed better come Wednesday.

Omaha, and the tournament, is just five days away! 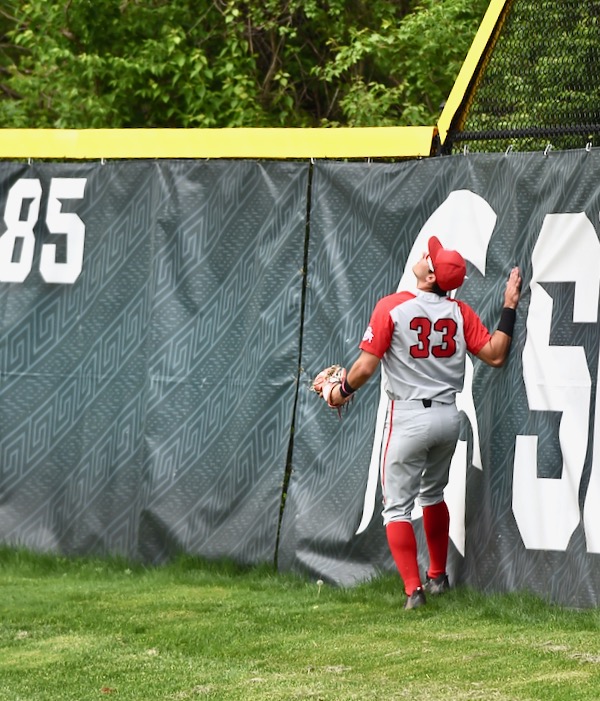 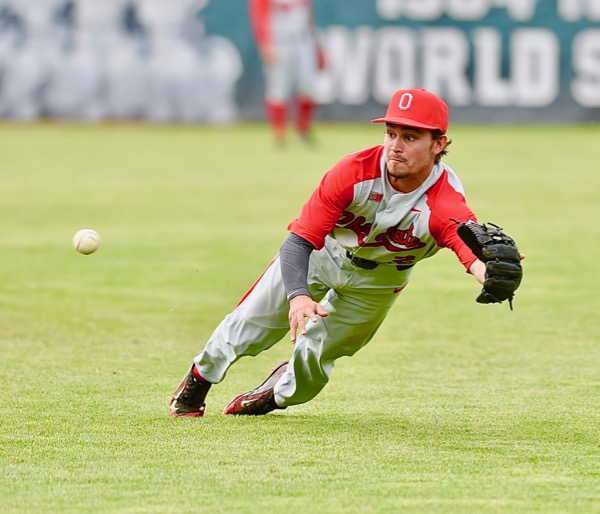