In his second year as the radio voice of Ohio State baseball, broadcaster Matt Andrews was daring enough to leave behind that to which others aspire…to create his own legacy in his home community and state. 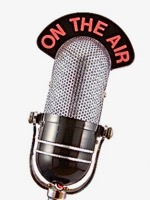 He’ll humbly share that he doesn’t exactly know what it is, or where it came from, but to those who’ve followed baseball, and listened to it for years…trust it, he has ‘it’.

“I don’t know about that,”  he laughed Sunday, prior to the Buckeyes series finale with Purdue.  “I just try to be myself.”

More than one broadcaster has tried to identify that which makes someone special, popular, and enduring as a voice to America’s summer pastime.

“You have to be genuine, and you have to be yourself,”  legendary Vin Scully once told me.  Scully retired last year after 60 years as the voice of the Dodgers.

Another once described it as being able to describe the game without imitating someone else more recognized – the ability to have your own style.

Still another qualified ‘it’ as the ability to talk with a command of both language and the game.  Do you have that certain pace of speech and quality to use the right words to paint the picture without stammering and searching.  Can you do it with instinct for what you’re observing?

Matt Andrews, 38, from nearby Bloomingburg, Ohio (Washington Court House area) has it all.  A graduate of Miami Trace High School (class of ’98), he did his first play-by-play broadcast of a high school basketball game on local station WVNU (FM 97.5) when he was 14.

“I thought it was pretty cool,”  he admits.  “I grew up a Reds fan and I won’t lie, listening to Marty Brennaman and Joe Nuxhall all those years had a profound effect on me.  I thought ‘it’ (broadcasting) would be a pretty neat thing to do.”

He set out to realize his hunch, enrolling at Ohio State to pursue a degree in broadcast journalism.  He worked at WOSU and along the way he developed a working relationship with the Chillicothe Paints, a member of the summer collegiate Prospect League – and with Prospect League commissioner Bill Lee.  Lee had a connection with Louisville Bats long-time broadcaster Jim Kelch (former Reds voice), and one day Kelch called and asked, “Is there someone in the Prospect League that you’d recommend for a job in Louisville.”

Without reservation, Bill Lee gave the nod to Andrews.

“I’ll never forget it…it was the fall of ‘o2,”  recalls Andrews.  “And Ohio State was playing Minnesota in football that weekend.  I went down to Louisville and interviewed, and a week later they called and told me I had the job.  I didn’t know what was going to happen.”

But what happened was…14 years with the Bats, including seven with Kelch, who left to work for the Reds in 2010.

One thing he learned was to be an exhaustive researcher.  He’s always prepared.  Andrews commands statistics and numbers that color his broadcast unlike most you’ll find in college baseball.  He knows what a player did last week, and last month, and shares that with his listeners as an overture to every at bat.

Whether learned, or innate, he also has that ability to describe the action with accuracy and pace, always matching the right words for a particular action, as if he’s seen it before…because he has.  Nothing makes you better than repetition.

“Broadcasting is like writing,”  he surmises.  “The more of it you do the better you get at doing it.”

And as Scully once emphasized, he does it without imitating.   Andrews does it by being himself – genuine. 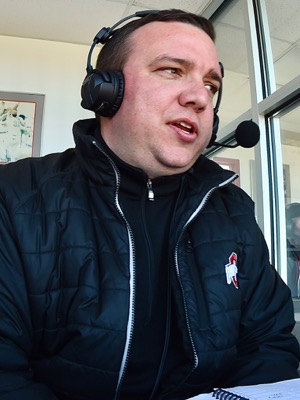 “You try to be yourself,”  says Andrews.  “But I grew up listening to Marty and Joe.  Reds radio has been my main influence.”

“You borrow certain phrases from other broadcasters,”  he admits.  “When you listen to others it’s natural that you’ll pick things up that you use in your own delivery.  But you try to be yourself.  I used to listen to every one of my broadcasts, and critique myself, but I found that I actually improved by listening to other announcers.  In terms of baseball, I remember getting significantly better during my last years working with Jim in Louisville.  And of course I grew up listening to Marty Brenneman and Paul Keels.  I listened to Jack Buck and Mike Shannon when they were working together in St. Louis.  But mainly, my baseball influence has been growing up listening to Reds radio.”

He left Louisville in the middle of the 2016 Triple A season to take a job with Ohio Radio (WBNS) in Columbus, a career risk that he weighed with concern for what he was leaving, seeking the opinions of colleagues before coming back to Ohio, to Columbus, and Ohio State.

And coming home meant the inevitable comparison with Paul Keels, the big voice of the Buckeyes and nationally known for his unique sound and style.

“Paul’s so versatile,”  says Andrews.  “I mean, he’s got the voice and he can call anything – he can do tiddly-winks – and make it sound good.  And, he’s become a good friend of mine.  I knew him before I came here, but he really helped me out.  He’s a very natural personality, and he’s a great guy.

“I get a kick out of being on the air and getting a text from Paul telling me that he’s listening.  That used to be like, ‘Wait a minute…really?’  It used to creep my mind knowing that he’s out there, but not anymore.  Not to sound complacent, but now I’m very comfortable with who I am.”

Happy in Columbus, happy to be home, Andrews admits that he misses baseball in Louisville, and the allure of a major league job…but admits he doesn’t miss the daily grind of travel and professional baseball.

“I was concerned on my possibly closing the door on professional baseball,”  he says.  “And I was very comfortable in Louisville.  I love that place.  But I decided to interview for an opening at WBNS to see where it might lead.  They made me a very good offer and I couldn’t turn it down.  I decided to come back home where my family is, back to Ohio State, and working with people I’ve listened to for decades.  It’s been very good. It’s nice to have some summer nights off.  I wouldn’t change any of it.”

In his second season as the voice of the Buckeyes, he follows voices like Herb Howenstein, Frank Fraas, Paul Keels himself, and works now with former Buckeye pitcher Bob Spears, whose day job is the unlikely position of being a funeral director on Columbus’s west side.  They sound good together…with a hint of early influences – Marty and Joe, and Jack and Mike – without actually sounding like them.

Critics call it the ‘it’ factor in broadcasting. 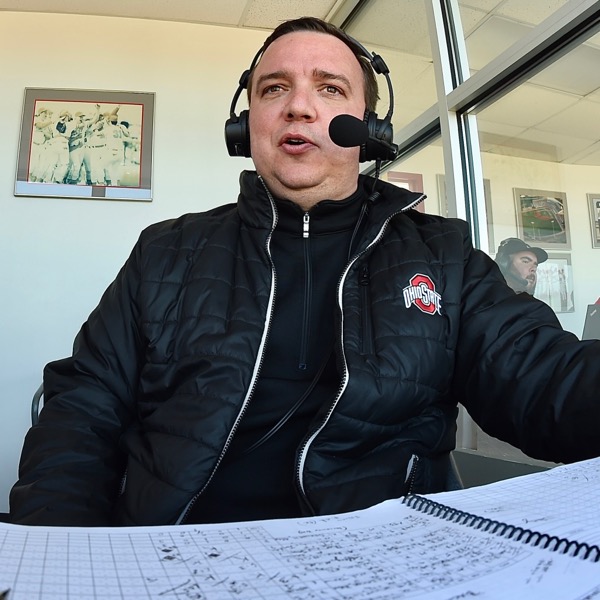 After fourteen seasons of professional baseball in Louisville, Bloomingburg's Matt Andrews is in his second season as the voice of Buckeye baseball. (Press Pros Feature Photos)