A great start and a great finish was enough to push past resilient Piqua, as Troy kept pace with Tipp in the GWOC North race.

Troy – For five innings Derek McDonagh could not have been better.  The Troy senior had the kind of mound presence and command of which starting pitchers dream.  Troy would eventually win the game over GWOC North rival Piqua, 7-5, but the way McDonagh started he left little hope that the Indians would get five hits, much less five runs.

He struck out the side  in the first…and again in the third.  In fact, he struck out eight of the first nine Indian hitters.

Along the way he got early offensive support, a single run in the first on a Keiran Williams RBI single, driving in teammate Brandon Emery.  In both the third and the fourth innings the Trojans tacked on a pair of runs, thanks to three hits, a hit batsman, and aided by some shaky Piqua defense.

It was 5-0 Troy – cruising – entering the sixth, when suddenly that which sustains pitchers suddenly abandoned McDonah.  Translation:  He lost a bit of that command – the two-seam fastball down and in and the breaking pitch down and away.  He left some pitches up in the strike zone, and what had been a slumbering Piqua attack for the first five innings suddenly came to life.

After Zach Lavy reached on an error to start the sixth, in succession Derek Hite, Mick Karn, Austin Davis all hit line drives – Davis an RBI double.  Spencer Lavy got a hit, Jan Adorno reached, Zane Booker got a base hit…and suddenly the 5-0 lead was gone and Piqua had tied it at 5-5.

But with runners on second and third and just one out, Owen Toopes and Zach Lavy took called third strikes…and momentum and the rally died.  For the sake of Piqua starting pitcher, Derek Hite, what could have been…and probably should have been…the go-ahead run was left just 90 feet away.

Reliever Chase Weaver entered the game for Troy and struck out both Toopes and Lavy.

And in the bottom of the sixth Troy revved it up again against reliever Austin Davis, scoring a pair of runs on three walks, an error, and a base hit by Jake Daniel to push the deciding runs across the plate.  And that’s how it ended as Weaver came out in the top of the seventh and routinely retired the Piqua side in order.  Final:  Troy 7, Piqua 5.

It was two different games – the first one being the five innings of Derek McDonagh at his best, pushing Troy to its 13th win of the season, and 11-2 in the division play.

The second was the impressive Piqua comeback…and the boot start by Troy to retake the lead and secure it behind Chase Weaver. 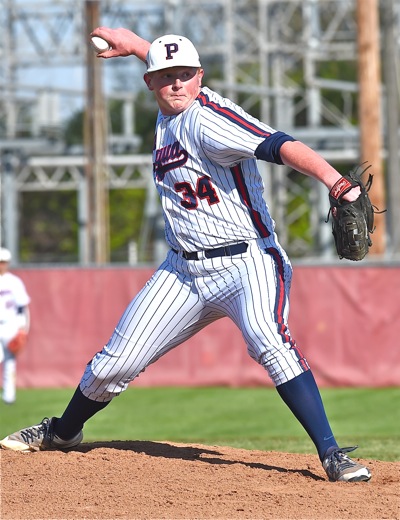 “He (McDonagh) located and mixed it up really well,”  said Trojans coach Ty Welker.  “He hadn’t pitched in a week, since the Tipp game, and he and Coach Murray really had executed a good game plan.  He threw some pitches they weren’t expecting and he got a lot of called third strikes (eight).  He really did a nice job.

“I think he got a little tired in the sixth;  he left some pitches up, missed location, and credit to Piqua.  That’s a good swinging team, they hit some line drives, and they came back.  But to have Chase Weaver do what he did…he got us out of the inning and then pitched a good seventh inning.  He hadn’t pitched like that all year.  He’s struggled with location.  But he got ahead of hitters today and if he can do that for us that sets us up pretty nicely.”

Piqua’s Derek Hite deserved a better fate.  Like McDonagh, he came out throwing strikes, pounding the strike zone, and pitching to contact.  But five times (officially) that contact was misplayed by the Indian defense.  Unearned runs probably cost him a chance to pitch deeper into the game…and a chance for a win.

“We battled,”  said Piqua coach Brad Lavey.  “Their pitcher located well, but I think he tired in the sixth and we started hitting some mistakes.  And that’s what you have to do in baseball.  You have to hit the mistakes.”

And their own mistakes, on defense, simply put them in a hole they couldn’t erase, even with the five-run sixth.

Piqua’s record falls to 7-11 for the year, as the two teams prepare to meet again Tuesday at Hardman Field, in Piqua.

And for Derek McDonagh, the disappointment of seeing such a great beginning finish the way it did was buoyed by the manner in which his teammates came back to win.  It is that time of year when every game counts as a momentum builder as the tournament looms…and the Trojans are still just one game back of division-leading Tipp in GWOC play.

“I was doing everything right,”  he smiled.  “I started hot, I hit my spots, it was going good.  I just threw my two-seam today and was able to freeze some batters.  I don’t know if they adjusted to me in the sixth, or what, but they just started hittin’ the ball.  But Weaver came in and he was clutch.  It was a big win for us, and I’m happy for him.”

And by the way…people actually came to watch at Market Street Field on Monday…in their shirt sleeves as temperatures reached 70 degrees.  Troy vs. Piqua baseball without insulation.

A fast start and a furious finish was all the heat anyone needed. 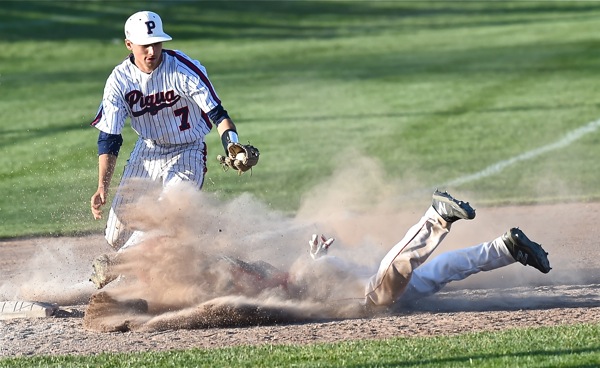 Where is he?….Piqua’s Owen Toopes may have had trouble finding this Troy runner in the dust during the Trojans’ two-run sixth inning. 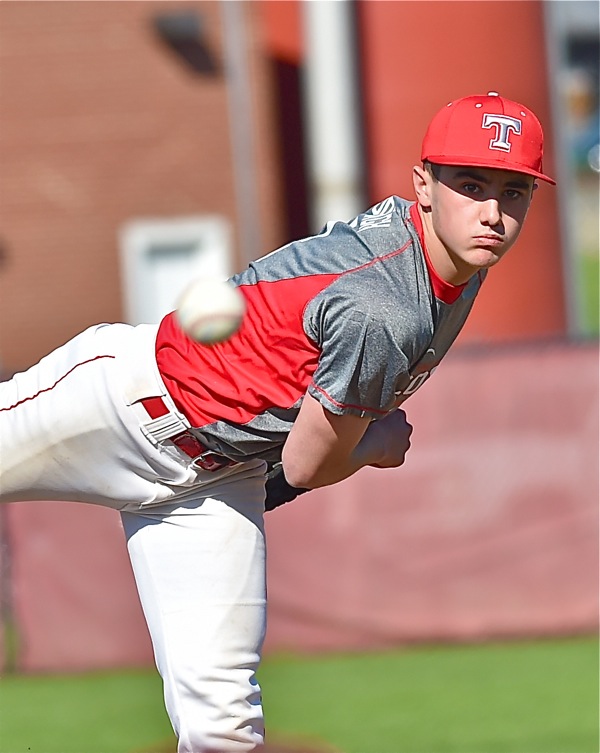 Troy's Derek McDonagh was 'hot' for the first five innings - no runs on just five hits - before Piqua tied the game in the sixth. (Press Pros Feature Photos by Sonny Fulks)