Tipp gets its customary pitching, and enough offense, to turn back former CBC rival Kenton Ridge.

Tipp City – With a knack for getting into a pitcher’s head with his uncanny ability to bunt for singles – even on a drawn in infield – it’s not easy to rattle Tippecanoe lead-off hitter Miles McClurg.

But there is one pitching staff that can intimate the senior speedster. His own.

“If was on the other team and I was looking pre-game down at the bullpen and saw them chucking gas, I’d be on edge,” McClurg said.

The Red Devils pitching staff has left more than few opposing offenses running on fumes this season. They were at it again Saturday in a 3-1 victory over former league rival and Kenton Ridge at Clawson Field.

Tipp senior Mason McClurg, the Red Devils’ No. 4 starter, held Kenton Ridge to five base runners through five innings. Only one came on a hit. Three walks and an error accounted for the other four.

While McClurg was doing damage to Kenton Ridge’s .312 team batting average, Tipp’s offense was doing just enough themselves to scratch out a couple of runs. Miles McClurg led off the bottom of the first with a single. He stole second (his 17th of the season), moved to third on a wild pitch and scored on Cole Barhorst’s RBI ground out for the 1-0 lead.

With the game tied 1-1 in the bottom of the fourth, Tipp senior Clay Barhorst stroked a two-out single. He stole second and scored on Mason McClurg’s RBI single for the 2-1 lead.

That was enough for a Tipp defense that has held 12 of its 15 opponents to one run or less, including seven shutouts. The Red Devils still made it interesting, though. 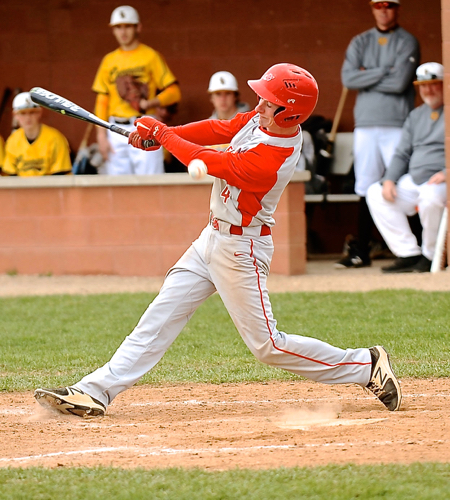 KR’s Bailey Armentrout reached on an error to start the sixth. He reached first on an overthrow and sprinted toward second unaware that catcher Cole Barhorst was sprinting down the first-base line following the play. Barhorst grabbed the overthrow and threw Armentrout at second. That proved crucial as KR’s next three batters reached on a single and consecutive walks.

“They’re probably sick of me saying those two words: little things. Do the little things,” Tipp coach Bruce Cahill said. “That’s what happened there. … Sometimes kids forget about the catcher doing his job.”

Tipp junior Ian Yunker relieved Mason after the single and walk. Yunker, making his first relief appearance this season, walked the first batter he faced to load the bases. He settled down and slammed shut KR’s chances with a pair of strikeouts, the final one on three pitches.

After surrendering a one-out double to start the top of the seventh, Yunker struck out the final two batters again. Yunker faced seven batters and struck out five.

“He’s just clutch. He just throws strikes and pounds the zone,” Cahill said. “We’ve got, honestly, the best velocity pitching staff we’ve ever had. And kids who can throw their off-speed stuff for strikes as well.”

Mason McClurg improved to 3-0 and lowered his earned-run average to 1.72. He struck out four and walked three.

“He wasn’t as sharp as he was last week, but he’s a battler,” Cahill said. “He competes and that’s what gets him through innings sometimes.” 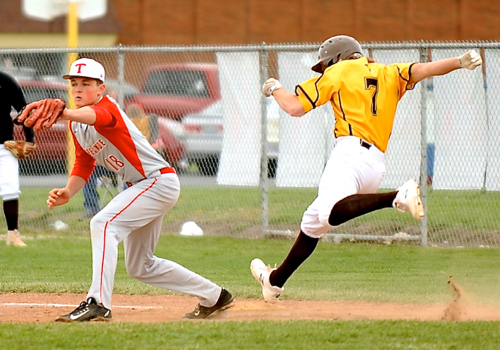 First baseman Josh Riebe gloves a throw to get the out a step ahead of Kenton Ridge’s Drew Wichael.

Yunker earned his first save. He’s also 4-0 with a 0.29 ERA. Mix in senior Zach Losey (4-1, 0.94 ERA) and junior Kenten Egbert and the Red Devils have one of their best rotations in years.

“Between me Losey and Egbert, I think we all try to see who can throw the hardest and see who has the nastiest stuff,” Yunker said. “The competition is friendly. We’re just trying to get the job done.”

Cahill said Yunker, Losey and Egbert have fastballs in the mid-80s, while Losey hit 91 mph last fall. Egbert, who became eligible last week after sitting out the first 13 games due to the OHSAA’s transfer rules, tossed a two-hit shutout at Fairborn with 12 strikeouts in his first start.

The non-conference win pushed Tipp’s record to 15-1 overall. The Red Devils are 8-0 in the Greater Western Conference American North division. So are the Troy Trojans. Those two teams are scheduled to meet next week for what could decide the division championship. Tipp hosts Troy at Clawson Field on Monday and travels to Market Street Field on Tuesday.

Dave Arbogast is proud to sponsor coverage of GWOC baseball on staging.pressprosmagazine.com

It’ll be a mixture of emotions for Yunger. He lives in the Miami East School District on the edge of Troy and grew up playing summer ball with many of the current Trojans.

“The first goal we have is to win the GWOC. This is a big one,” Yunger said. “We definitely have what it takes. I’m looking forward to it. … I have a lot of friends and enemies that go to Troy.” 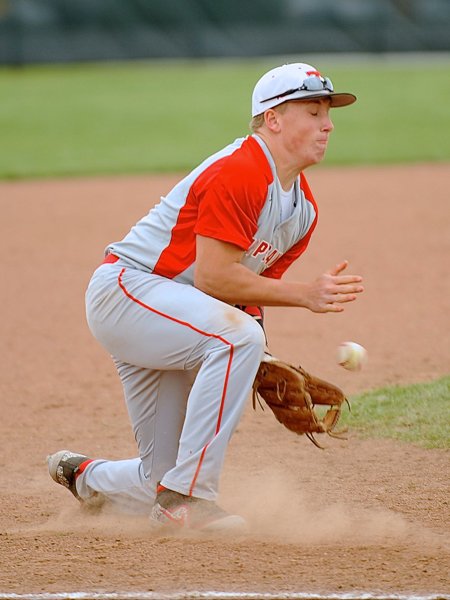 Miles McClurg, meanwhile, isn’t endearing himself to opposing defenses with his small-ball antics. On Saturday, McClurg went 3-for-3 to raise his average to .408. His hit in the third inning bounced in the dirt in front of home plate and high into the air. McClurg beat it out.

“He hit the ball about 60 feet total today.” Cahill said. “He causes havoc. He’s a catalyst for us. They could play in on the grass and still, he just runs so well.”

“I’ve always been pretty good at bunting,” McClurg said. “I like getting on first, stealing second and having Cole or (Josh) Riebe behind me hitting me in. … I just have a lot of fun out there.

“I love this team. In the dugout we all have fun and we’re all talking to each other. It’s a blast.”

“It’s always good playing these guys because they’ve always been a quality program,” Cahill said. “I’ve always enjoyed playing Kenton Ridge from the time I first started as a coach and (former KR coach) Tom Randall was always good to me. It’s a nice rivalry. They beat us. We beat them. No one gets too angry.” 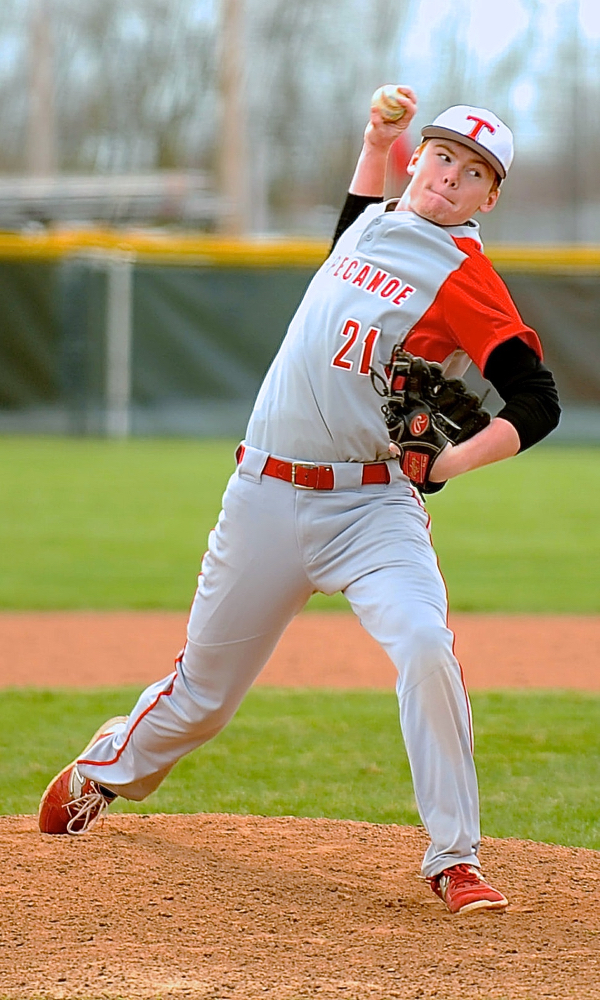 Tippecanoe junior Ian Yunker struck out five of the seven batters he faced to earn a save . (Press Pros Feature Photos By Greg Billing)