If you looked closely on Thursday, at the faces, Marion Local basketball looked a lot like Marion Local football.  And if you saw the game’s final play…there wasn’t any question at all.

Columbus – Without question, it’s one of the more colloquial aspects of the state tournament, and small-school basketball.

Because if you follow the different sports through the different seasons of the average school year…you’ll see a lot of the same faces in the championships for football in fall, basketball in winter, and even baseball and track in the spring.

Small schools have to share athletes, and kids welcome the opportunity to play multiple sports;  and none perhaps more significantly on opening day of the 2018 state basketball tournament than the Marion Local Flyers.

For their game with Pandora-Gilboa, you see, came down to the final 1.2 seconds, when with Marion in possession of the ball out of bounds…the Flyers had to do something to protect the possession, as well as their tenuous 2-point lead, 56-54.

At stake was a trip to the championship round on Saturday.  And any slip-up with inbounding the ball could have turned over the possession to Pandora, and perish the though…the unthinkable that so often happens in tournament basketball – a tie, a wild three-pointer, overtime, and defeat jerked from the jaws of apparent victory.

So OK, on their first try to get the ball inbounds against Pandora’s pressure, Marion couldn’t do it.  They called their final timeout and went to the bench to regroup.  It was then that Marion basketball…began to look a lot like Marion football, in the manner they had won the Division VI championship last December.  Of their five players on the floor for that final play, four had played principle roles in that football win over Kirtland High School.

Junior Nate Bruns was the quarterback on the football team, but in this instance coach Kurt Goettemoeller flipped the roles…with a daring pass downcourt from senior Collin Everman (the only non-football player on the court) to a streaking Bruns, this time playing ‘wide receiver’.  The idea was to keep the ball out of the hands of Pandora by putting it ‘on’ the hands of Bruns.  It was risky, because had the pass missed and gone out of bounds Pandora would have gotten the ball back with 1.2 seconds to play…and under their own basket. 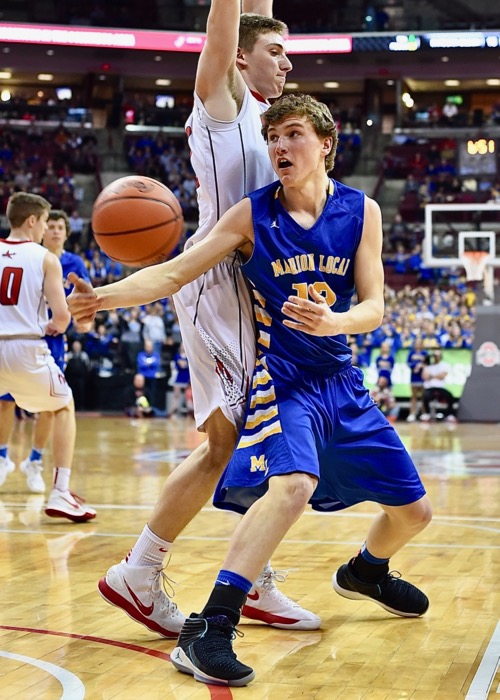 But…Marion is well-schooled in the execution of the forward pass, and Everman hit Bruns perfectly in stride.  Bruns hauled it in, secured his dribble, and the clock ran out on their two-point win.  Championship Saturday, just that quickly, was a reality!

Asked about the play – a comparison of Marion football to Marion basketball – Bruns smiled and said, “It’s different, because in football you have all those pads on and people can’t recognize you.  In basketball everyone knows who you are…there aren’t as many out there.  So in that way, it’s different, but the competition part is something we know.”

“If I had it to do again I might have wanted Nate throwing the pass,”  smiled Goettemoeller.  “But we wanted the ball in Bruns’ hands as much as possible at the end of the game.”

And lost in the history of the tournament, of that particular play, was the fact that it was Collin Everman who threw the pass – the ‘perfect’ pass – that sealed the deal for another important Flyer win.

The Marion ‘magic’ became a Marion irony…a kid who doesn’t play football.  But he knew, just the same…how they do it at Marion. 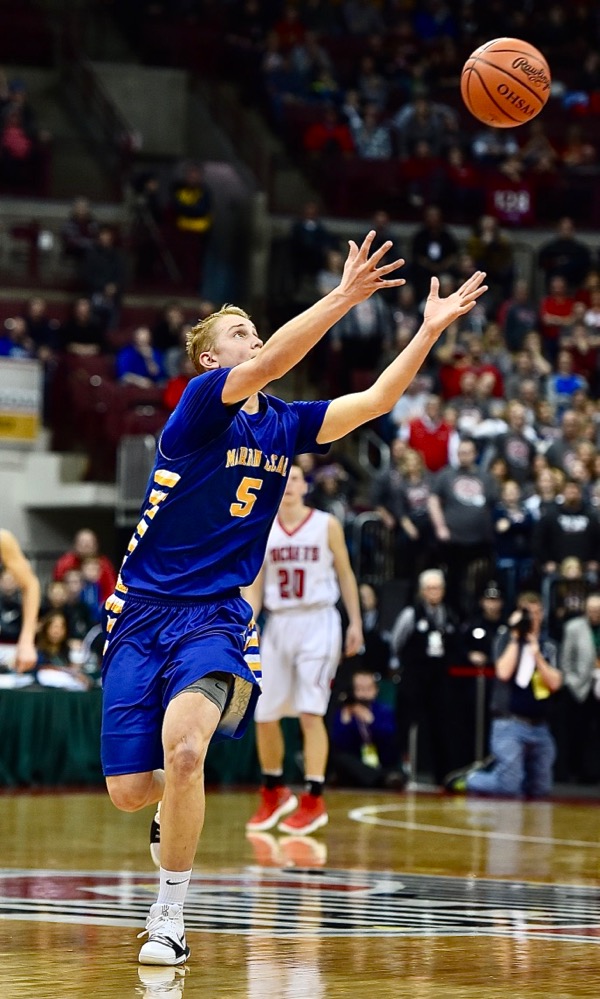 Usually on the throwing end of a pass, it was Nate Bruns on the receiving end Thursday to close out the game and secure the Flyers' win. (Press Pros Feature Photos by Sonny Fulks)