“A Heckuva’ Game”….Marion Squeaks Into The Div. IV Finals

They did with their defense, of course…and just enough predictable offense to matter.  Marion Local edges Pandora-Gilboa to advance to the Division IV championship round.

Columbus – You know if was good when both coaches, the one who won…and the one who lost, admit it.

“That was a heckuva’ game,”  he sighed, disappointed to be on the losing end, of course.

“But they’re a tough, physical, and long team that can keep bringing size off the bench.  We didn’t lose the rebounding game all year, and today they doubled us up (24-13).  To me, that was the difference in the game.”

And the game, for certain, was so close it had to come down to one of the fine point statistics.

Marion Local shot a fantastic 56% from the field, aided measurably by the early outside shooting of Tyler Prenger, whose back-to-back three-pointers seemed to put the Flyers into a comfortable offensive frame of mind.

Pandora-Gilboa shot 54%, aided measurably by the 24 points from guard Drew Johnson, who personally was 12 of 16 from the field.

Marion turned the ball over 10 times. 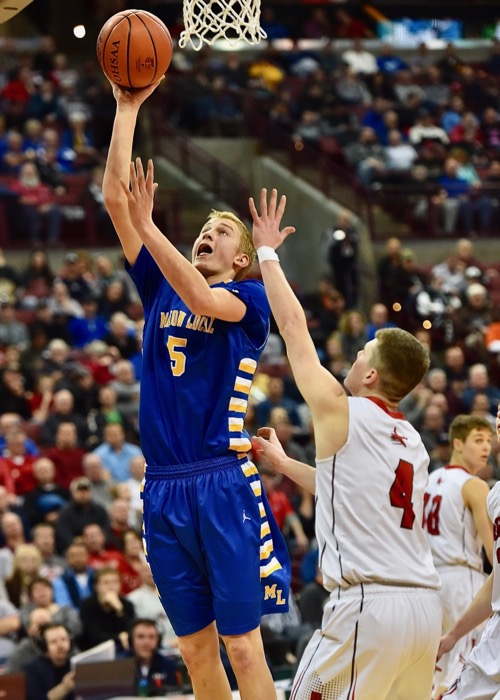 Marion had 7 steals in the game.

So, you get the idea.

“I think the people who came today got treated to a great game by two very good northwest Ohio basketball programs,”  added Goettemoeller.  Pandora is a whale of a basketball team and it took everything we had to come out on top today.”

Back-and-forth was the phrase that best described it – a game of short spurts of momentum.  PG led at the end of the first quarter, 16-13, but Marion caught up to take the halftime lead, 29-28.

They did it, as MAC fans know, with a steady dose of #32, senior Tyler Mescher, whose 17 points came with a customary brutal effort under the rim.  He shot 50% from the floor, and did the majority of his damage in the first half (12 pts.)

They did, as one would also assume, with a strong supporting game by junior Nate Bruns, who 15 points came at those times when they needed them most – and after sitting out much of the first half with two early fouls.  But fully energized in the fourth quarter, the ball was constantly in his hands and he responded with all 15 of his points in the second half, including 5 for 5 shooting from the foul line.

“Tyler was a warrior for us all game long,”  said Goettemoeller.  “And we had to nurse Nate through the first half with those early fouls, so Tyler kept us in the basketball game.

“But when it got to crunch time #5 (Mescher) pretty much took over.  It was pretty much by design that he had the ball in his hands so much in the fourth quarter.” 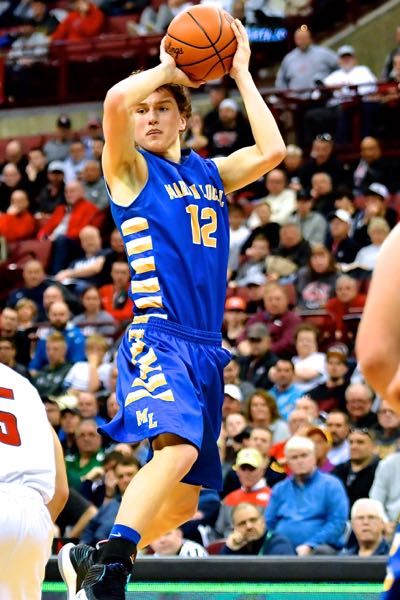 Another big attribute…Marion’s size and efficiency off the bench.  Pandora’s points all came from four of their starters – Johnson, Jared Breece(16), Cooper McCullough (9), and Riley Larcom (5) – while Marion had points from seven different players, notably 6 points from Nick Tangemon and 5 points from Collin Everman off the bench.

“I tell people you can make the case of us having seven starters,”  added Goettemoeller.  “And all of them have been a starter at one point in the season.  Collin did a great job handling the basketball for us, and made some big shots…and Nick’s just a great athlete and in a two-point game like that you need every little bit you can get from everyone.  Certainly, our bench might have been the difference today.”

And some of those points were, in a word, choice – a baseline reverse layup by Matt Rethman in the third quarter and a pair of nifty catch-and-shoots by Everman to either give Marion the lead, or sustain it.

Marion was led my Mescher’s 17, and Brun’s 15, while Tyler Prenger finished with 8, Tangeman had 6, Everman had 5, Matt Rethman had 4, and Justin Albers added 1 point.

How close was it, really?

“We just kept talking about defense in the second half,”  said Nate Bruns.  “We needed to get stops, and stops, and more stops.  I think our defense won the game for us, again.”

But on offense, Pandora had no answer for Bruns in the second half.   He scored from the baseline, from the paint on a pair of stick-backs (offensive rebounds), and in transition.  He was a without question the individual difference in the final outcome, scoring 15 of the Flyers’ 27 second half points…and hit a pair of clinching free throws with seven seconds left on the clock. 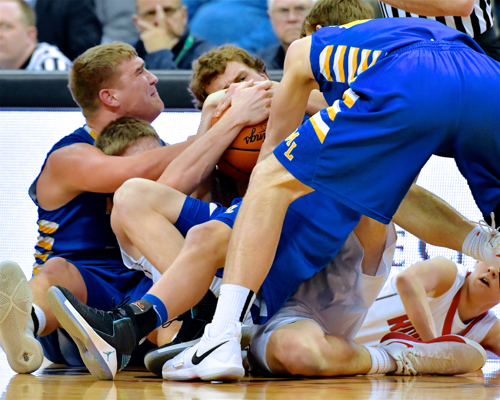 Tyler Mescher (and friends) fight for a loose ball during the second half of Thursday’s win.

Down three, Pandora had the ball and an opportunity to tie the game with a three-pointer.  But Goettemoeller made one of those sage coaching moves that’ll be talked about for years if the Flyers go ahead Saturday to actually win the title.  He decided to foul PG’s Cooper McCullough and send him to the line for the 1 and 1…with 1.2 seconds left on the clock.

McCullough hit the first, but needing a miss and an offensive rebound to have a chance at tying, PG seemed confused on how to actually pull that off.  They committed a lane violation that gave Marion the ball out of bounds, and Bruns (who else?) sprinted the length of the court to haul in a Hail Mary that ended the game.

“I’ve never actually fouled in a situation like that,”  said Goettemoeller.  “But up three I wasn’t going to let someone beat me with a three-pointer.  I don’t know if it was good coaching or not – it’s an age-old debate – but I felt we were bigger and stronger with the potential to get the rebound.  I thought if we could eat up seconds by making them dribble to the half court line it would be in our favor, and then when I saw there was just 1.2 second remaining…I was elated.”

Well, enjoy it for a day…as Flyer Nation will again pack Value City Arena on Saturday for the Division IV championship game with Cornerstone Christian, out of the Cleveland area, who easily pushed aside Berlin Hiland, 51-41, in the other semi-final game.

“I’ve already seen plenty of film on them,”  said Goettemoeller.  “And I know that Michael Bothwell (24 points) is a load.  But, we’re going to come back, play Marion basketball, defend, have fun, and take our chances.  If we do that I think it’ll be close at the end, and if it is…we’ll have a chance to win.”

A heckuva’ summation to go with a heckuva’ basketball game.  The Marion ‘Magic’ goes on.

At least for one more game! 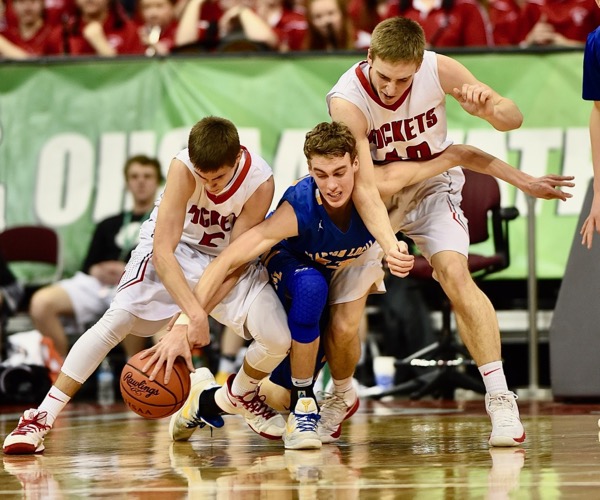 Marion’s Justin Albers fights through a pair of Pandora-Gilboa Rockets during first half action. 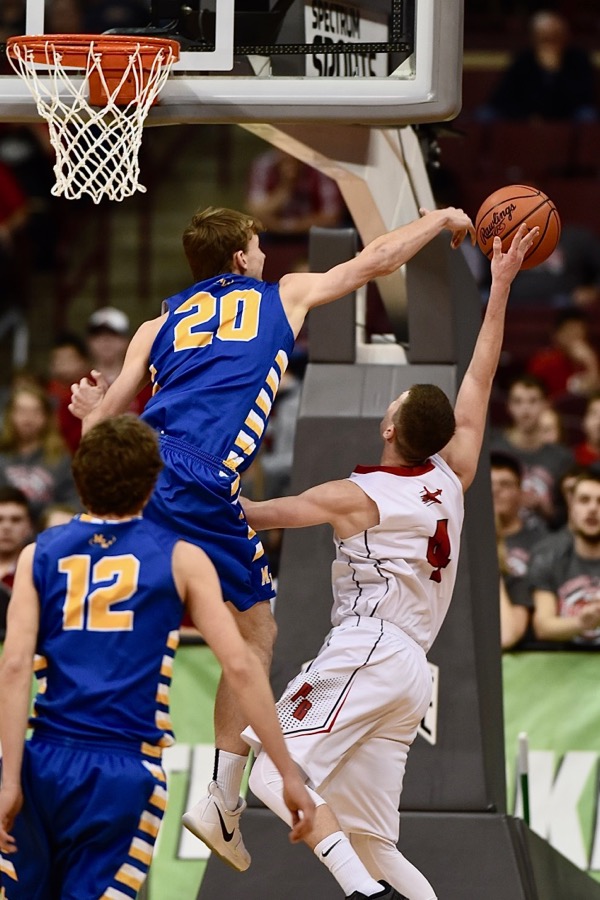