Out of Time, Out of Season…Versailles Falls In Div. III District Final

The Versailles Tigers rallied from a 17-point deficit midway through the third quarter to tie the game late, but Madeira made the plays down the stretch to win the Division Three District title.

Dayton — Every coach says it.

You have to play for 32 minutes. The Versailles Tigers found that out the hard way Wednesday night.

Versailles came roaring back from a 17-point third quarter deficit, but could not get over the hump, as the Madeira Mustangs made the plays down the stretch to win the district title, 57-51, at UD Arena.

“We just ran out of time,” said Versailles coach Travis Swank outside the quiet Tiger locker room. “If we could have put another quarter on the scoreboard maybe things would have been different. We just dug to big of a hole and the consequence was we lost the game tonight.” 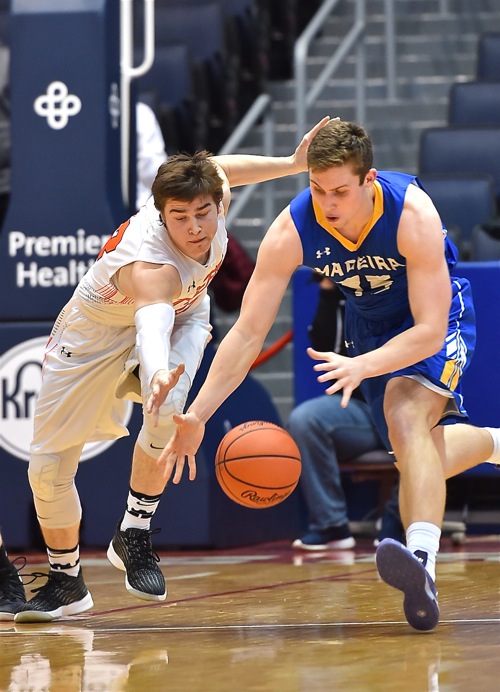 Noah Richard (above, left) stretches in his attempt to take the ball away from Madeira’s Jack Cravaack.

The 6th-ranked Division three team in the state according to the final AP poll, the Tigers looked nothing like themselves for the first 20 minutes against the Mustangs.

Madeira’s Mark Manfredi shadowed Versailles star Justin Ahrens everywhere he went, and Mustang big man Jack Cravaack worked at will in the paint as the Mustangs built a 16 point first half lead. Versailles got the margin down to 32-21 at the break but shot just 37% from the floor.

Cravaack, headed to Purdue in the fall on a football scholarship, showed plenty of skill on the court as well. At halftime, the 6-5 senior had 13 points and 5 rebounds on his way to game highs of 22 and 12.

“He made some real tough shots,” Swank said of Cravaack. “Lots of times AJ or Justin had their hand up, but he’s big and strong and finished around the rim. He wasn’t a great free throw shooter on the season but tonight he made almost all of them. Tonight was just his night. Just meant to be.”

Madeira shot 58% from the floor in the first half, and that percentage rose to 65% as the Mustangs opened the third quarter on a 10-4 run to stretch the lead to 42-25.

Following a Versailles timeout, the Tigers finally got in the game. Michael Stammen and AJ Ahrens hit three pointers to spur a 10-0 run to end the quarter. After three, the Tigers still had hope, trailing 42-35. 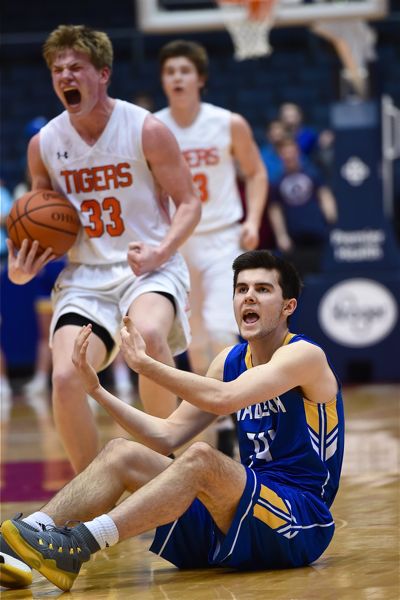 “How can that be a foul on me?” says Madeira’s Kyle Johnson.

“Our defense got us back in the game,” Swank continued. “We picked up our pressure, got a lot of stuff off our defense and were able to frustrate them. We also rebounded better with our pressure. We looked to attack a little bit more and didn’t settle as much. In the first half, we shot a lot of threes. The middle was wide open, but we didn’t exploit it like we should have.”

The comeback continued in the fourth quarter.  Justin Ahrens, who had just three baskets all night -all threes – nailed a triple from the right wing to finally get the Tigers even at 48. That was the Tigers last hurrah, but not their last chance.

Trailing 52-50 with 48.5 seconds to play, Ahrens went to the line. He made the first but missed the second. At the other end, Cravaack, who made six straight from the stripe earlier, missed one of two to leave the margin at two.

On the next Tigers possession, Justin Ahrens was again fouled, but missed the front end of a one and one. Adam Wieczorek scored to restore the lead to four, and Cravaak made two free throws after a Tiger turnover to seal the win for the Mustangs.

“We had our chances,” lamented Swank. “Tied it up and had the ball but couldn’t get the shot to go down. Had chances at the foul line but couldn’t convert. We just couldn’t get over the hump. I’m a believer that things happen that are meant to be. Tonight we were meant to come back but not be able to finish the job.”

The Tigers dealt with inconsistent officiating all night. The Tigers were whistled for 18 fouls on the night, compared to just 9 for the Mustangs. Madeira left the door open for the Tigers, missing 7 of 11 free throws in the fourth quarter, but the Tigers couldn’t capitalize at the end and finished the season at 21-5.

Justin Ahrens finished with 13 points, but took just 7 shots from the floor, all three pointers. AJ Ahrens led the Tigers with 15, while Michael Stammen came off the bench to make four 3s and finish with 12 points. 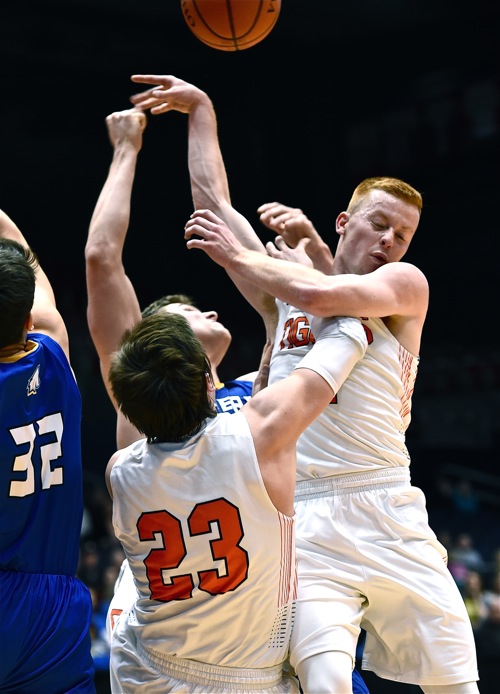 Keaton’s final foul…Keaton McEldowney (above, right) fouled out of the game going for a rebound with five minutes left in the game.

“They were running a box and one on Justin, but it was different from what we have seen before,” Swank explained. “It was a 1-3-1 where they kept guys underneath, so it wasn’t a true box. But they chased Justin all over the floor, they held, they threw a lot at him. He was being guarded really tightly, too tightly at times, I thought. We had a lot of screens set for him, but we got run off them. Just didn’t do a good enough job.”

Besides Cravaack, Maderia, now 18-7, got 14 points from Wieczorek and 13 from Kyle Johnson.

Both teams had 21 rebounds, and Versailles had 12 turnovers to Madeira’s 9. The Mustangs had a big advantage in the paint, 32-20, but the Versailles bench was a shining light, out-scoring Madeira 15-0.

“Lot of energy and a lot of effort off the bench tonight,” Swank praised. “Rolled with those guys in the second half because the energy level was up and we were trying to get back into the game. Just didn’t have enough left at the end o0f the game to pull it off.” 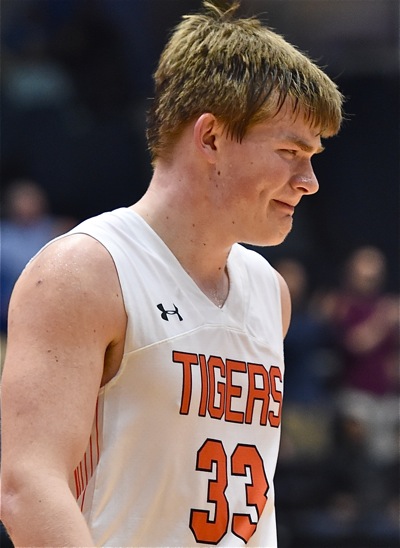 A.J. Ahrens shows his frustration as time runs out on his season…and Tiger career.

Swank praised the five Tiger seniors who played their final game in a Versailles uniform.

“Keith Jones has been through a lot with injuries, but never complained and worked his way back to contribute to this team. Noah Richard is a big strong kid that played JV the past two seasons and made a lot of big shots for us this year. Keaton McEldowney is the kind of kid you want on your team. He will run through a brick wall for you. AJ Ahrens is the glue for this team. We asked him to guard the other teams best player most of the time, and that is a lot to ask of a high school player.

“Justin (Ahrens) is Justin. Hopefully there is another kid out there dribbling and shooting the ball who is inspired by him. He is a tireless worker and is always in the gym working on his game. The Versailles community has seen the best in Justin. He will do well at Ohio State.” 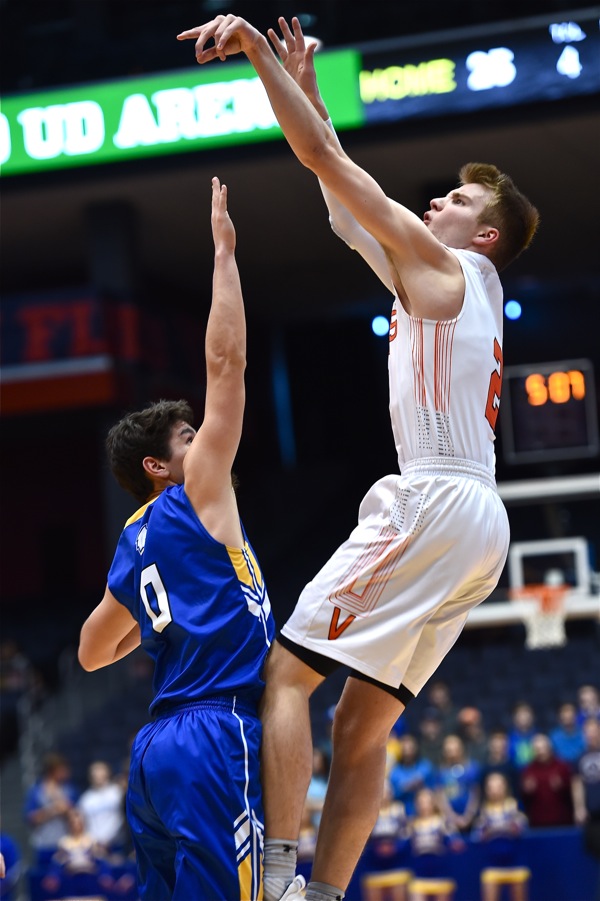 Harrassed all night by a variety of 'junk' defenses, Justin Ahrens helped the Versailles comeback with this deep three from the wing. (Press Pros Feature Photos by Sonny Fulks)_