It was a struggle – and for about 24 minutes it was shocking, in fact.  But in the end Versailles reached into their old reliable bag of tricks and came away with another Division III district title…over Purcell Marian.

Springfield – The Versailles girls won another Division III district basketball title Monday night, and nearly at the expense of every Frenchtown partisan who showed up with a history of cardiac issues.  It was, for about 20 minutes, heart-stopping, you see.

Purcell Marian (19-5) didn’t buy into it much the fact that they were playing the state’s #1-ranked team.  They weren’t intimidated by stats, or reputation, ranking, or even history.  No, they came to play, as coach Jamar Mosley would later say, and for that first 24minutes of the game…they outplayed, outshot, outscored, and out-rebounded the two-time state champs.

They led by four at halftime, 24-20, and frankly, had Caitlan McEldowney and Ellen Peters not hit a pair of three-pointers in the final minute of play before the half…the margin would have been ten.

The Tigers, for whatever reason, were flat.  Uncharacteristically, they weren’t moving well, they weren’t energized on defense – their customary fashion – didn’t box out much on the boards.  Frankly, they missed so many layups and stickbacks that it could have been presumed that fate was waiting on the bus with the engine running.  “It didn’t look good,”  said Jacki Stonebraker afterwards.

And…it didn’t get better after halftime.

Purcell Marian extended their halftime lead to 32-20 coming out of the locker room, denying Versailles a single point until well after the mid-point of the quarter.  Finally, with 2:22 left, they finally scored on an Ellen Peters stickback, her only basket of the second half.

It seemed to be the jolt they needed.

They reached into an old bag of tricks – they amped up their pressure – caused a pair of turnovers, scored, and turned up the pressure some more, going on a 7-2 run.  Marian, which had played for so long with so much apparent poise, suddenly showed a crack.   Still, they led by eight at the end of the third quarter. 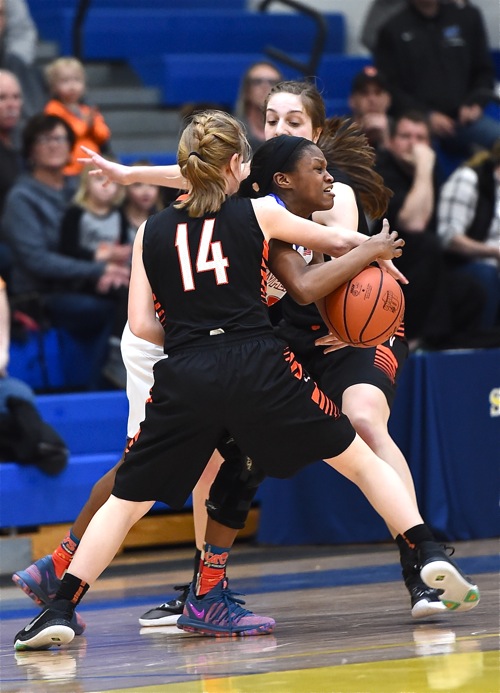 Old reliable, Versailles’ pressure, turned the tide of the game during their 33-17 second half run.

The Cavaliers had pressed Versailles for much of the game, and their length and athleticism had caused the Tigers problems – hesitation and uncertainty.  Now, Versailles turned the tables, tightened the screws and doubled the basketball and guard Santia Cravens as she tried to cross the time line a minute into the fourth quarter.  As she tried to pass it to a teammate Lindsey Winner appeared from nowhere and swiped it from mid-air, set sail for the other end, and scored a transition layup to cut the margin to just two points, 38-36.  Mosley called a time, to calm his girls and “give them a breath”.

The ‘crack’ became an abyss for Marian, as another turnover led to a bucket in the lane by Danielle Kunk, her only basket in the game, and the score was tied.  The crowd got into it, the bench got into it, and just that quick the momentum, the lead – everything – belonged to Versailles.  They turned what had been a 31-20 deficit into a 33-17 run of their own (spanning 10:22 seconds), highlighted by  a pair of huge Kami McEldowney three-pointers in the fourth…and won, 53-48.

Winner’s steal, among all the defensive highlights of a thus far 24-1 season, became the turning point of the game, and one that Jamar Mosley pointed to as the point of no return.

“We had ’em right where we wanted ’em,”  he said afterwards.  “But we got loose with the ball, their defense cost us a couple of turnovers, and they cut the lead to four points.  But still, we were a bucket and a box out away from controlling the game.  But her steal (Winner’s) took the momentum away from us.  I give them a lot of credit of coming out and playing their game when it mattered most.  I told my girls, ‘they’re not #1 (in the state) for nothin’.  They’re a good basketball team.”

Winner talked about her big moment. 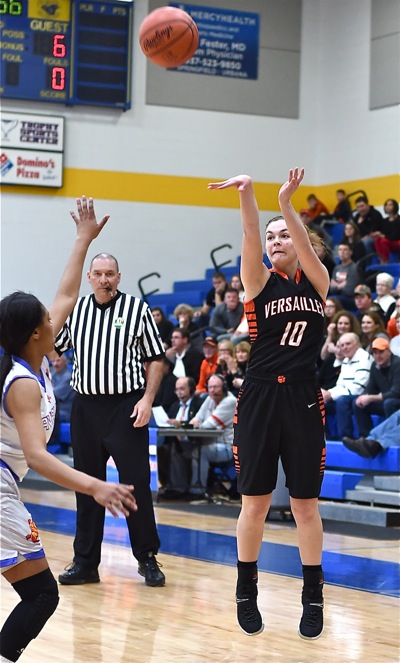 “I knew when I got my hands on the ball I was going to take it to the basket,”  she said after taking her strand of the ceremonial net cutting.  “I saw it coming, I knew there was nowhere else for her (Cravens) to pass it, so I just got in front of the nearest player, got the ball and took it to the basket.”

Jacki Stonebraker has won so many big games, two state titles, and has experienced the emotional roller coaster of 30 years of competitive basketball.  And yet, it never changes, or gets easier.  She admitted…that it was a stressful first twenty six minutes of basketball.

“It didn’t look good,”  she said afterwards.  “I looked at the bench, at my coaches, and said, ‘We need a miracle.’

“But it wasn’t a miracle,” she then recanted, with a smile.  “It was the grit of the Lady Tigers.  They know how to win.  They’ve been in these situations, they look at each other, and they know what to do.  Sometime I feel like we hold them back too much because what you saw in that fourth quarter was how they like to play.  They don’t play scared.  They go out and give it all they’ve got.”

It improves their season’s mark to 25-1, and punched their ticket for Wednesday’s regional semi-final game with Williamsburg (24-1)…and just two games away from a return to the Final Four and a shot at their third Division III title in ten years.

How they did it:  Kami McEldowney led all scorers with 19 points…Lindsey Winner finished with 10…Danielle Winner had 9…Ellen Peters had 7…Caitlan McEldowney had 6…and Danielle Kunk had 2.

“They girls said, let’s go after ’em,”  added Stonebraker, talking of the comeback and turnaround.  “And I said, OK, whatever you guys want because what I’m saying’s not working.  Just the athleticism that Lindsey showed with that steal was phenomenal.  You can’t coach that.”

The frustration of so many missed shots at the rim early in the game – of having so many obstacles to overcome – none of it stood in their way.

“It’s call the next play,”  said Stonebraker.  “That’s our terminology.  You grind it out.  It’s teamwork, intensity, and pure will.”

But still, when it was 32-20 – when they went 5 minutes and 38 seconds deep in the third quarter – did Stonebraker’s heart sink at the prospect of seeing their season pass before their eyes?

“No, because we’ve been here before, or at least I’ve been there before,”  she smiled.  “I’ve been down 11 points in a district championship with Roger Bacon in the fourth quarter.  You just have to keep believin’, keep being positive, and keep going at ’em.”

A bit of ‘coach speak’, perhaps, but who’s to argue.  Every cat has nine lives, they say.  And for no better explanation, you can make the point that Lindsey Winner, Kami McEldowney, and the Lady Tigers used one of them Monday to extend their season. 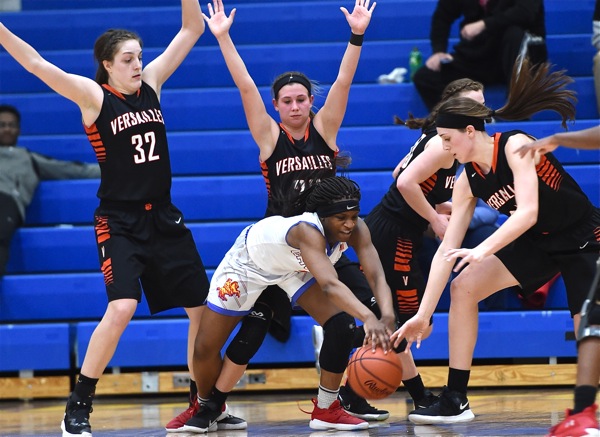 “I knew when I got my hands on the ball I was going to take it to the basket.” – Lindsey Winner (above, right) 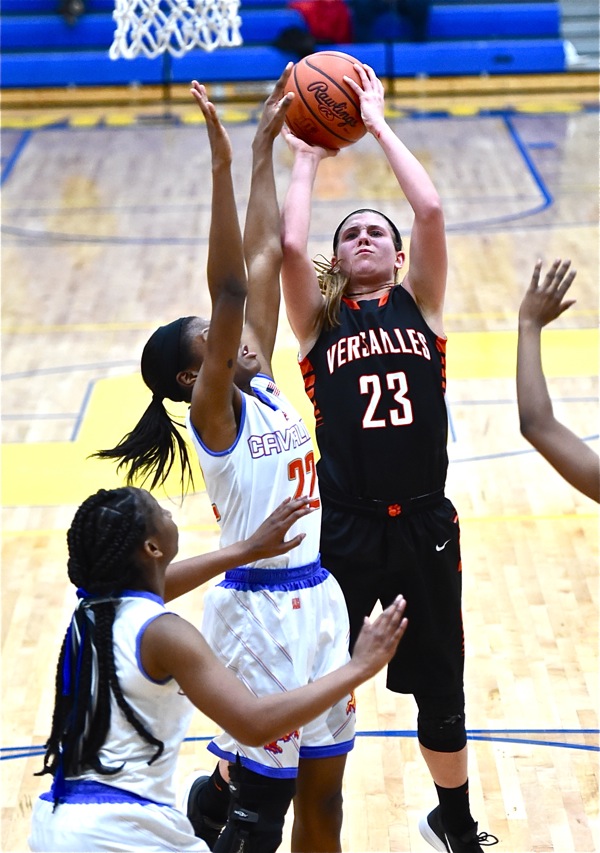