No Contest: Anna Rolls By Northeastern In Division Three

Anna used a blistering start to roll over Northeastern in the D-II Sectional @ Vandalia Butler. Next up: a date with Brookville for a District tournament berth.

Vandalia –  It’s an often-used cliché, but Wednesday night it was true.

Anna’s Division Three sectional semifinal with Northeastern was over almost before it started.

The Rockets, now 20-4, jumped to a 12-0 lead in the opening minutes at the Student Activity Center, gave up a basket, and then reeled of 21 straight points to decide the outcome by the 7 minute mark of the second quarter. 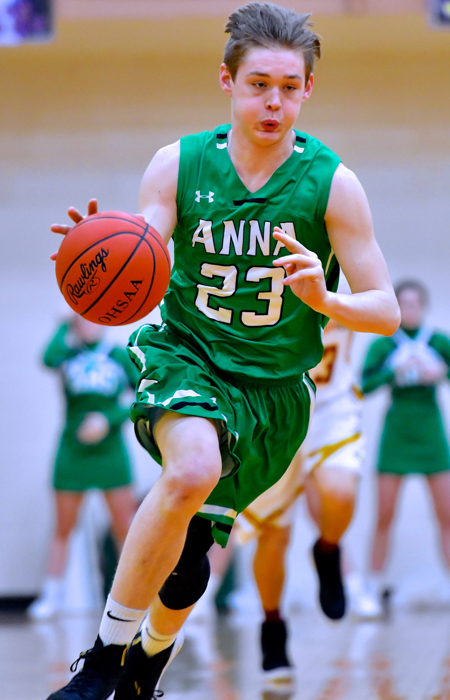 Joel Cathcart finished with 12 points for the win.

The final, with help from a running clock the entire second half, was 73-21, and sends the Rockets into Saturday’s sectional final against Brookville. The game time has been changed to 7pm.

“I’m very happy with the way we came out and established the tempo from the start,” said Anna Head coach Nate Barhorst. “We didn’t really click in a lot of aspects our last game (a 68-55 win over Dixie Saturday). Tonight we came out with a lot more intensity. Even our warmup seemed like we knew we had to do a better job.”

Anna opened the game in a full-court press, and Northeastern, a 4-18 squad out of the Ohio Heritage Conference, never knew what hit them. Joel Cathcart scored three layups off steals, forcing a Jets timeout less than 2 minutes in.

Needless to say, the timeout didn’t help. All told, the Jets turned the ball over 11 times in that first quarter. Cathcart finished with 10 points in the period and Anna led 30-2 after 1, making many fans, especially from Northeastern, wondering why they had made the trip.

Wyatt Bensman took over the scoring lead in the second quarter, hitting a pair of threes among his 8 points. Eight Rockets scored in the first half, which ended 53-9, and set the running clock in motion for the remainder of the evening. 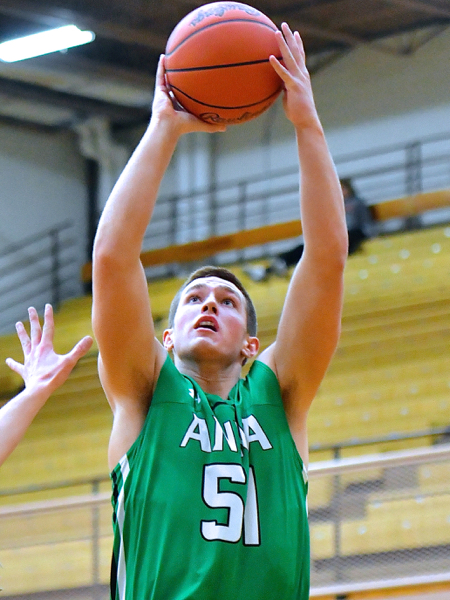 “We told the kids at halftime not to lose their intensity,” Barhorst said. “That happened to us a couple of times this season. We just wanted to come out and play solid defense in the second half, and the game really flew by with that running clock. I think for the most part we did that.”

Bensman finished with a team-high 14 for Anna, while Cathcart added 12, all in the first half. Bart Bixler and Drew Brodman added 8, while Austin Fogt finished with 7, including a thunderous first half slam that brought the Rocket faithful to their feet.

“This type of game is good because you get to play a lot of guys,” Barhorst explained. “And it lets you get some guys going who need to get going. We are a pretty athletic team and when we get going, we share the ball, we get it to the guy with the hot hand, and everybody played well tonight. 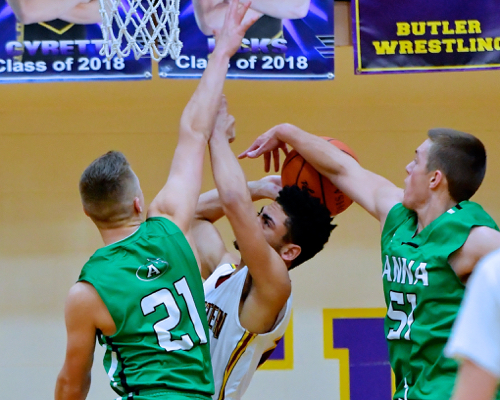 Mason Platfoot and Drew Brodman’s defense was a big factor in the rockets’ win.

Brookville had to come from behind, and then hold on to beat National Trail 53-49 in the first game of the evening. Barhorst was a very interested spectator.

The most significant point of the evening is that the victory gave the Rockets 20 wins on the season, no small feat given the competition in the Shelby County League and a strong non-league schedule.

“It’s the first time we have reached that mark since I have been the head coach,” Barhorst said as he headed for the bus. “You are right, with the schedule we play, it is no small accomplishment. This is a great group of kids and I am happy for them, but there is still a lot of work we want to get done.” 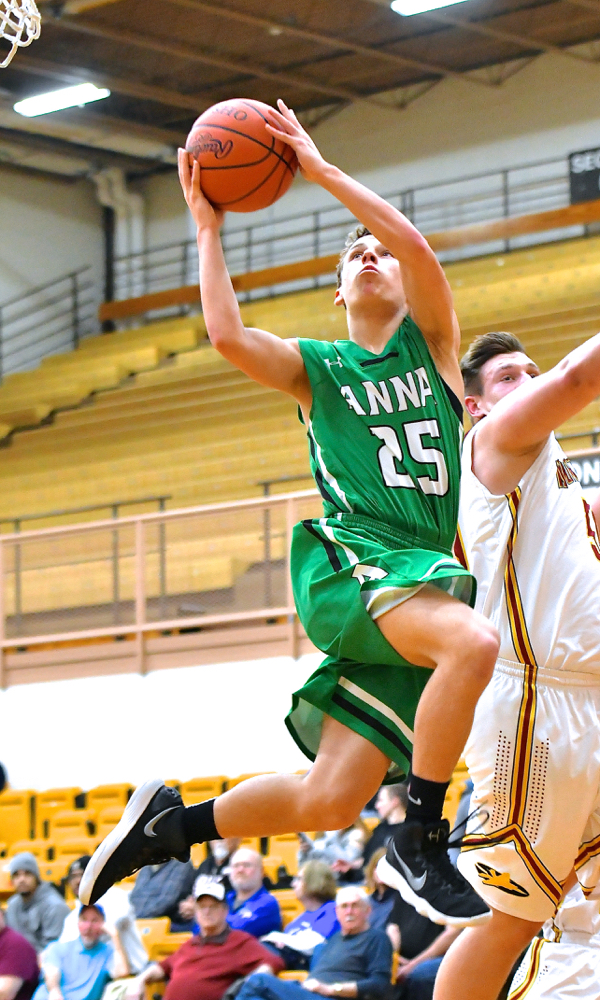 Bart Bixler goes up for a lay-up to add to his 8 points he contributed for the Rockets win. 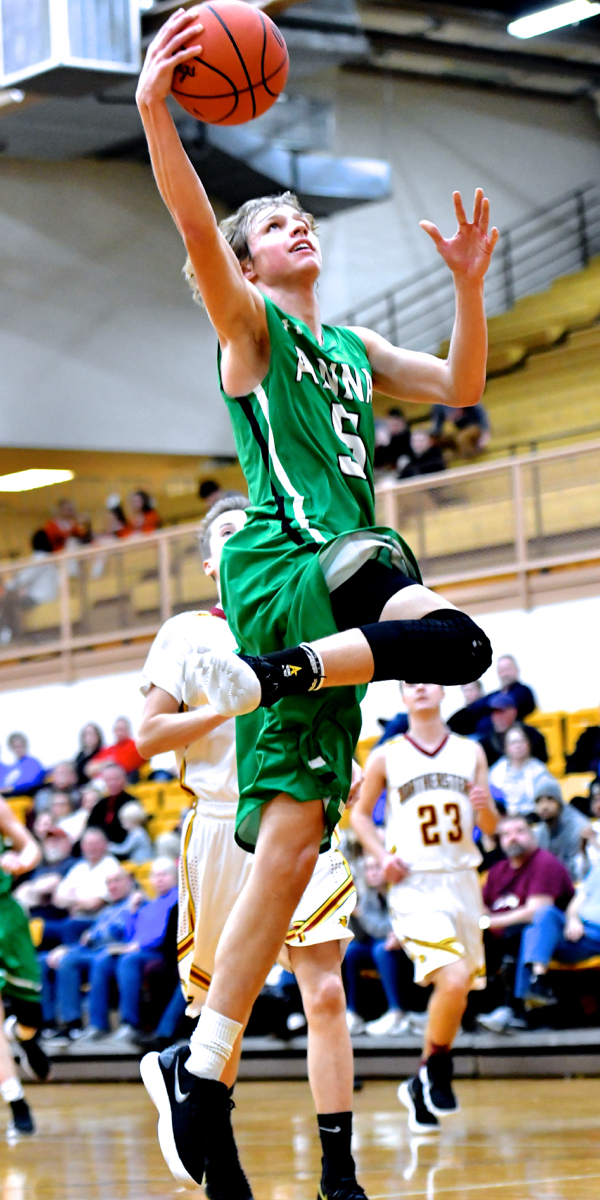 Wyatt Bensman finished with a team-high of 14 points for the Rockets win. (Press Pros Feature Photos By Julie McMaken Wright)