Hal McCoy: Is ‘The Greek Freak II’ Coming Of Age For UD’s Flyers?

Tuesday, Kostas was “The Man”, he played for a glorious 19 minutes.  The Flyer Faithful gave him a standing ovation when he left the floor late in the game, hoping they had just witnessed The Greek Freak II’s coming out party, getting a sneak peek of what might be in the future.

DAYTON — When Kostas Antetokounmpo stands sideways he resembles the world’s tallest Popsicle stick. And how they fit his name on the back of his University of Dayton basketball jersey is a stitch-making miracle.

They list him as 6-foot-10 and 195 pounds, but if they had left him in the wind that was blowing outside University of Dayton Arena Tuesday night he would have blown into the Great Miami River.

So it was a bit eyebrow-wrinkling when UD coach Anthony Grant decided to use Kostas extensively against Saint Louis University, a team that looks as if it was recruited off the Mississippi River docks from Local 39 of the Longshoreman’s union. 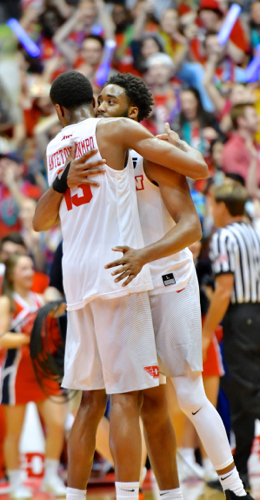 The Billikens are big, bad, bullies under the basket and defense is their speciality.

Kostas, though, was not intimidated and he played a glorious 19 minutes and was the main reason the Flyers came from 13 points down two minutes into the second half to a 53-50 victory.

But on Tuesday, he was The Man.

When he left the floor late in the game the Flyer Faithful gave him a standing ovation, hoping they had just witnessed The Greek Freak II’s coming out party, perhaps getting a sneak peek of what might be in the future for the red-shirt freshman from Athens, Greece. 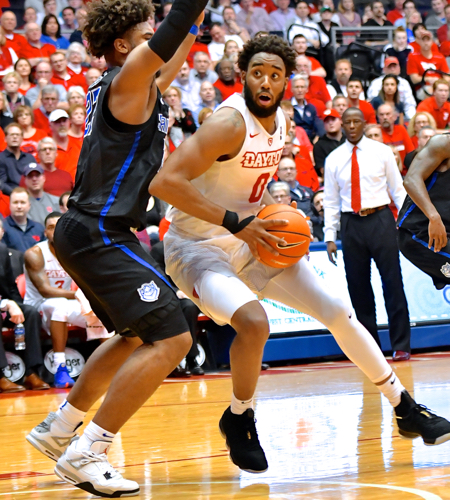 Josh Cunningham works his way to the basket against a St. Louis defender.

“The one thing I’ve learned so far from being here is that you can only control what is in your hands because you can’t control what’s not in your hands,” Kostas said of his mix-and-match playing time. “I try to stay positive and keep playing hard.

“This game helps me to get in there for game reps to get better,” he said. “I haven’t had a game like this since the beginning of the season.”

Whether he plays or not, Kostas has a ritual. Just before player introductions, he listens to the music on the public address system and does a little unchoreographed dance, “Just shuffle to the music,” he said.

It was apropos, though, that during a timeout after the Flyers came back from 13 points behind to tie it at 45-all, the song, “We’re Not Going to Take It (Anymore) by Twisted Sister was blaring on the sound system. Kostas wasn’t dancing then. He was doing his dancing on the floor during the game.

Despite his slender build, his length and wingspan intimidated the Billikens under the basket, forcing them to alter shots that misfired badly late in the game.

Kostas was instrumental in the comeback with a room-rattling play with 5:35 left. The Flyers were in the midst of their comeback from 33-20 behind. They trailed, 43-41. 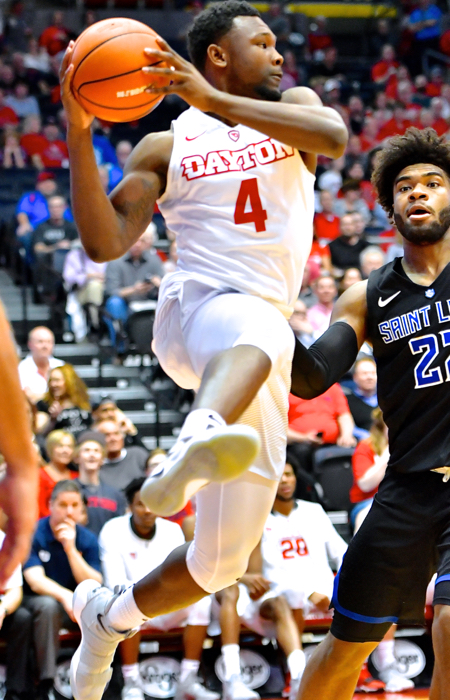 Jordan Davis hit a three for UD’s first lead of the second half.

Saint Louis’ leading scorer on the season, Javon Bess from Columbus, went up for a three-point attempt. Out of nowhere, Kostas loomed over Bess like Batman with his wings spread and batted away the ball.

Kostas then sprinted down the floor and roamed under the hoop, where Trey Landers found him with a pass and Kostas slammed home a double-fisted dunk to tie it, 43-43.

“Ah, man, that was a relief because I was yelling switch, switch, switch (before the blocked shot) and Jalen (Crutcher) didn’t hear it so I thought, ‘I gotta go get it now.’”

The Flyers put on a 19-6 run that brought them back from 33-20 behind to a 39-all tie and it was Kostas who blocked a shot and was fouled and sank to free throws to tie it.

Hasahn French, who led all scorers with 20, scored with 1:25 left and Aaron Hines made one of two free throws to pull the Billikens to within two at 50-48. 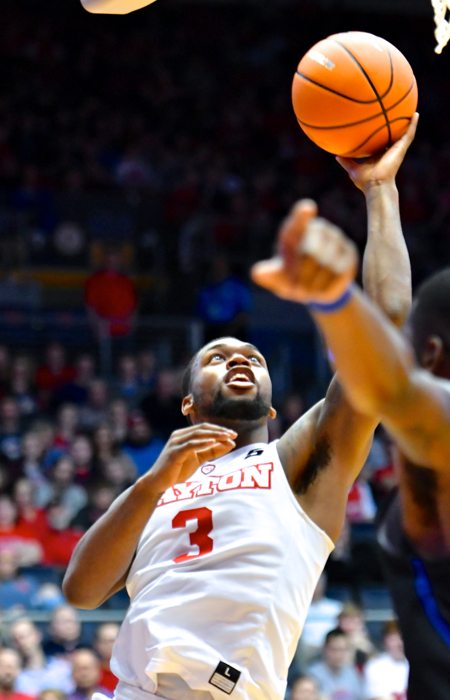 After Josh Cunningham dunked one home, French scored again on a dunk and it was UD 52, Saint Louis 50 with eight seconds left.

Crutcher made one of two free throws for a three-point lead and a game-tying attempt at the buzzer by Bess clanked off the rim.

Landers led the Flyers with 13 points to add to Kostas’ 12. Kostas picked up the slack from Josh Cunningham scoring only four and Darrell Davis scoring only four, ending his streak of 15 straight games in double figures.

As expected, this was a game of defensive in-fighting. The Billikens lead the Atlantic 10 in scoring defense, 65.5 points a game. The Flyers scored 12 less than that, but slapped their own frog-strangling defense on Saint Louis.

“I’m really proud of our guys because that was an old-fashinoned slugfest,” said Grant. “It was a defensive battle and it was great to see our guys up to the challenge.

“Saint Louis is a really good defensive team and we knew we would have to be at our best to have any type of offensive continuity. Tonight wasn’t one of those nights that wasn’t necessarily pretty but I loved it because our guys stepped up to the challenge from a defensive standpoint. Our defense won the game.”

And a lot of that defense swirled around Kostas.

“It was great to see Kostas come out and impact the game,” Grant added. “His intensity offensively, attacking the basket and defensively being a force guarding on the perimeter and being a deterrent on the inside was great.” 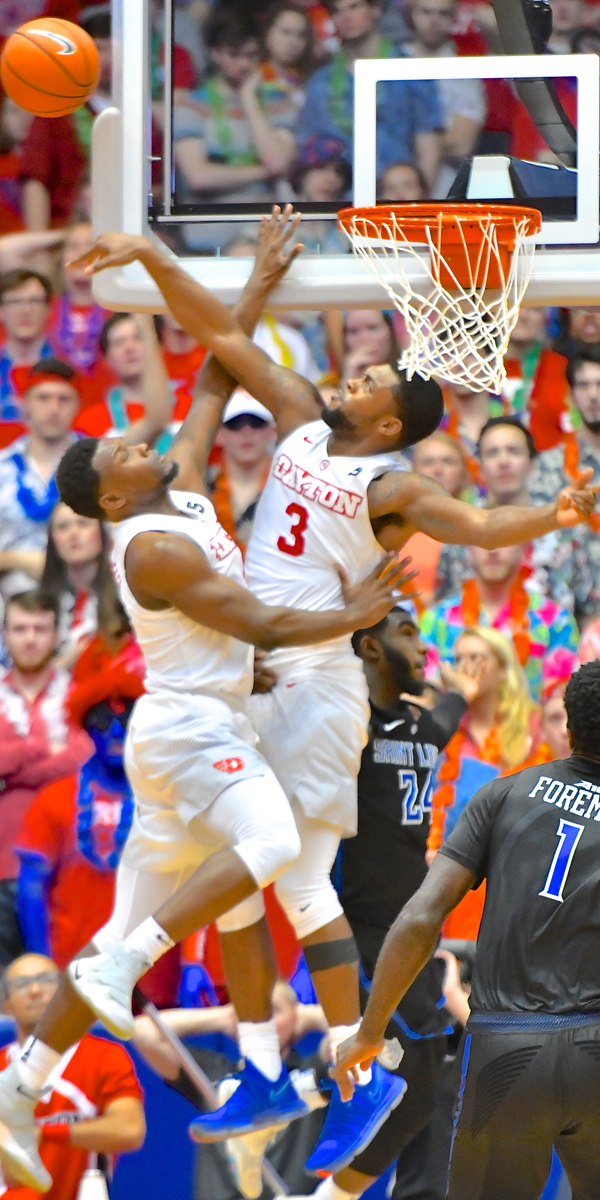 Trey Lander’s and Jordan Davis make it a team effort to block a shot. 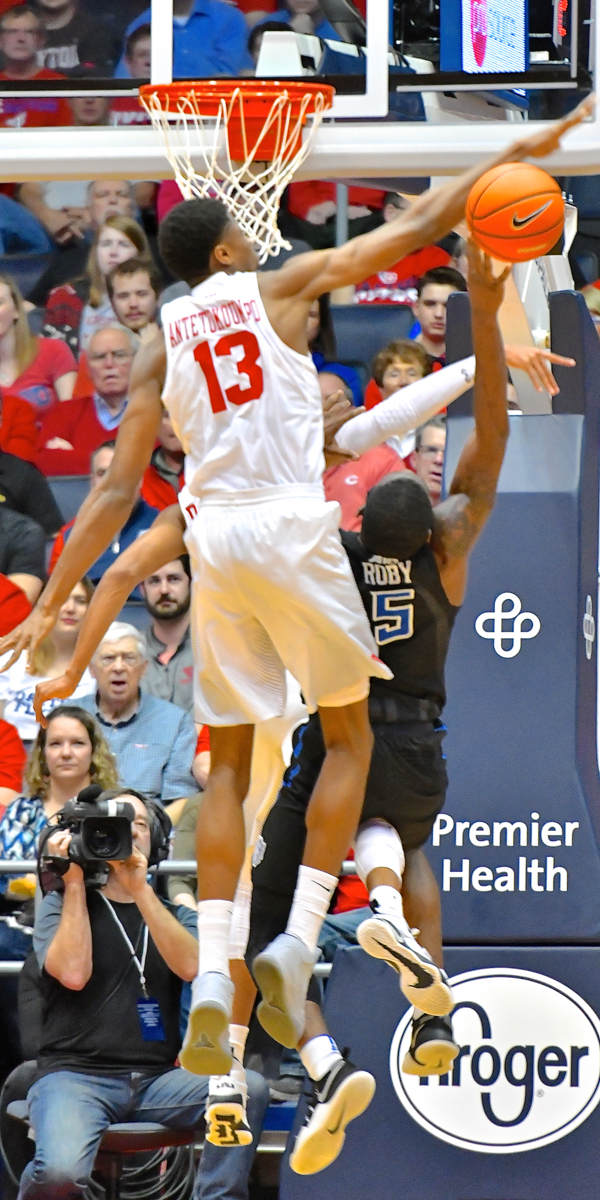