The Foolishness Of Speeding Up Baseball Games….

Rob Manfred handed down the new rules for speeding up baseball Monday. What he did…was show how little he really knows about what makes baseball games long in the first place. Read on…you too, Rob!

Commissioner Rob Manfred took another giant step Monday towards showing just how little he knows about the problem of why baseball games are too long.

What he did was come out and declare that teams would be limited to six trips to the mound during a nine-inning game…by the manager, the catcher, or another player.  This he said, would makes games play more efficiently.  Something like ten minutes, maybe.

Of course, he showed his lack of spine when he ducked out on enforcing the pitch clock, which has been in the rules of baseball for generations, but ignored.  He ducked that because he didn’t want to take on the player’s union.

Actually, I’m sure he does know why games take so long to play, but owing to the hand that feeds him – the owners – he completely ignored the one factor that makes baseball an absolute bore to watch on television.  He said nothing about the length and number of commercials aired between innings.  That represents revenue, of course, and where money’s concerned move heaven and earth…but leave Budweiser alone.

He said nothing about instant replays, and the issue of making the world wait while the umpires huddle for confirmation from the booth, somewhere in New York.  That takes time, of course, and it detracts from the flow of the game.  Plus, it removes the human element of an umpire’s impact on the game entirely.  Worse, as a former umpire, it negates the fact that they’re usually right to start with – a human resource disaster.  You demand that they be perfect, and then you slap them in the face daily.

He said nothing about the narrowing of the strike zone – of squeezing the plate to the point of grading umpires on what the camera shows from a view 400 feet away and slightly off-center.  Those guys know if they want to work they have to conform to the standards of K-Zone, so they err on the side of being conservative.  They don’t call enough strikes.  But if you called more of ’em the hitters would swing more, the ball would be put in play, there’s more action, and the games end probably a half hour sooner. 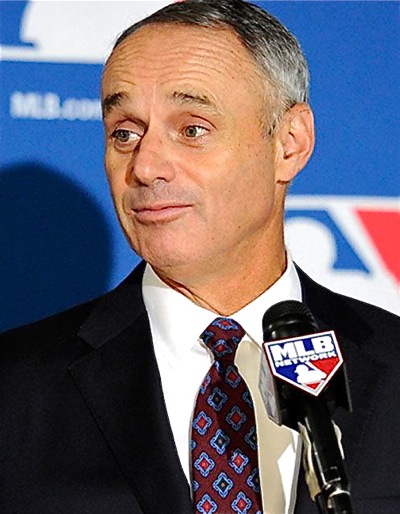 No, Rob Manfred and the ‘suits’ of baseball chose not to shoot the elephant in this case, but instead took it out on a rabbit.

I admit that there are some games where there are an inordinate number of trips to the mound, principally by the catcher.  But it’s usually necessary to either coach, or get the signs right, because from my experience in seven years of minor league baseball there are some guys too dull to read the signs and keep them straight.  They have to be constantly reminded.

There has been talk for years about limiting major league pitchers to just five warmup throws for pitchers between innings, like it is in high school and college, but I can also tell you that after the first couple of innings most professionals only throw five pitches, anyway.

So the real culprit in boring baseball is not what happens on the field, but what happens in the truck outside the stadium.  It’s called television, and while I enjoy watching the games, I turn down the sound and ignore the commercials.  It’s not the number of trips to the mound that makes a World Series game last four hours, it’s television, made worse by the endless analyzation from old ballplayers whose last chance at promotion is to beat a dead horse – talking about pitch sequence.  It’s not that interesting, and it makes the game…LONGER.

Now, for what they charge to see a major league game now…as a consumer I’d want to hang around the ballpark as long as possible.  There’s a lot to see and marvel at – the mark-up on hot dogs, $9 beer, and a Frisch’s Big Boy that’s three times more than store price.  For a $60 ticket I’d want to get my money’s worth, sure enough.

And if you go to a game for relaxation and entertainment – to let life slow down while you spend quality time with the family – why is it so necessary to make it end sooner than you want, anyway?

So, what Rob Manfred and major league baseball did Monday to speed up the games was pure foolishness – a man who hasn’t actually played the game since Little League.

Take one look at him, and tell me if you think he’s thinking baseball…or money!