Marion Does…In Do Or Die!

Maria Stein – Who can blame Versailles coach Travis Swank if he sees the ‘box-and-one’ defense in his sleep?

And who can blame Swank if he took a little extra time in the post-game locker room Monday night to get the point across…that at some point the once #5-ranked Tigers were going to have to find a way to win tough games in the fourth quarter?

You can’t swear by the first, but Swank admitted to the second following the latest of his team’s sudden three-game swoon…a 52-47 loss Monday night to the  surging Marion Local Flyers (15-4, 7-0 in the MAC).

In front of the biggest crowd in recent history at Marion Local (sold out for a basketball game) – and in one of the state’s toughest environments to play – Marion used its trademark physical defense, and predictable points from Tyler Mescher (23) and Nate Bruns (18) to take sole possession of the first place in the MAC with Monday’s win.

In the process Versailles dropped to 16-4 overall, 6-2 in the league, and absorbed its third loss in as many outings over the past six days (Vandalia Butler, St. Henry, and Marion). Suddenly the Tigers are playing ‘Titanic’ basketball…a little bit of a sinking feeling?

From the outset it was typical MAC basketball.  The place was teeming with people – loud, shrill, and probably a little annoying to people with the ‘miracle ear’.  It was physical, and Marion immediately took a 12-4 lead on the strength of inside shots by Nate Bruns and Tyler Mescher.

And defensively, the Flyers borrowed from the example of St. Henry last Friday night, when their coach Eric Rosenbeck and the Redskins said in as many words…Versailles might beat us, but Justin Ahrens won’t.  Marion’s Kurt Goettemoeller observed, and used the same ‘box-and-one’ defense that Rosenbeck used to deny Ahrens the basketball, and by game’s end the Ohio State recruit had just seven points, his lowest total for the year. 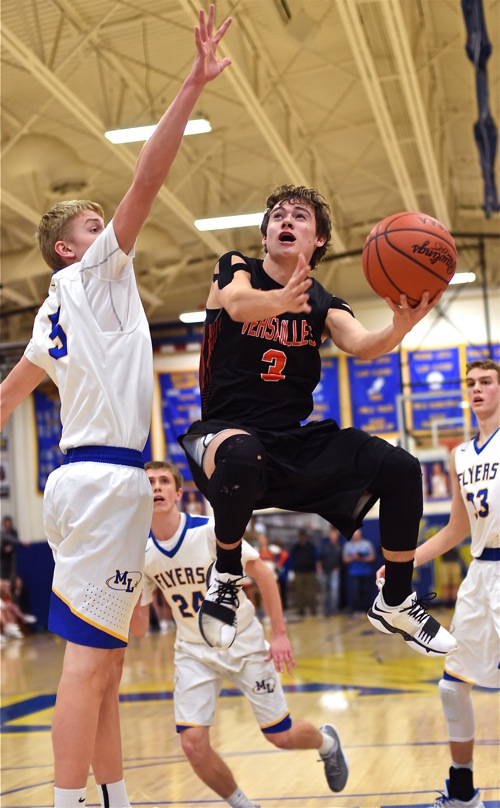 Versailles’ Kyle Jones kept the Tigers in the first half with all of his 12 points coming before halftime.  (Photo by Sonny Fulks)

One man denied is another man’s opportunity, though, and while Ahrens was being hounded, his teammate, Kyle Jones, was doing his best to pick up the slack.  Jones, who barely scored in last week’s two losses, suddenly got aggressive and scored all twelve of his points for the game in the first half.  He hit a pair of three-pointers along the way, and shot the Tigers back into contention by halftime, trailing by just two points…25-23.

“Kyle did a lot of good things for us tonight”  said Swank afterwards.  “He’s a senior and we need him to keep doing those things.”

But for whatever reason…he didn’t do them in the second half.  In part, because Marion amped up the pressure on the Versailles backcourt, and the tempo of the game moved into the paint, where Mescher and Bruns went to work for Marion.

But Keaton McEldowney suddenly ignited for Versailles, scoring seven of his twelve points to pull Versailles ahead by four points at the end of three quarters, 39-35.

That lead was quickly erased in the fourth as Marion’s pressure caused turnovers from Jones and fellow guard Michael Stammen;  and the Flyers’ Nick Tangeman and Bruns turned those miscues into points.  All the while, in their half-court offense,  Marion continued to pound it inside to the waiting Mescher, who responded with seven of his game-high 23 points in that final frame. 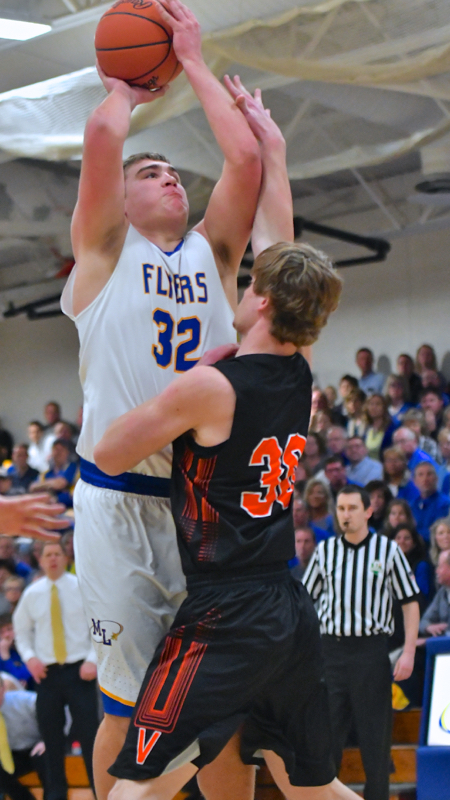 The mark of any good team…Marion sealed it at the foul line, connecting on five of seven attempts in the final two minutes to ice the win.

It wasn’t easy.  Wins in “title” games – if this was the ‘title’ game – never do come easy.  But in winning in the manner in which they did Marion sent a strong message to any and all upcoming opponents that there’s no such thing as an easy game against the Flyers, either.  Their size, aggressiveness, and ability “to steal” spelled doom for Versailles.

“It’s never easy when you play a team like Versailles,”  said Kurt Goettemoeller.  “Travis does an excellent job with his guys.  And we had limited preparation time because we played Saturday night.  Basically, we just had a walk-through yesterday, and we had never played a box-and-one.  I’m not the smartest guy in the world, but the one thing I do well is steal from smart people…and I think Eric Rosenbeck is pretty smart.  He’s knows what he’s doing and I just stole his game plan from Friday night.

“Actually, I think we have an ability to play the box-and-one even better than St. Henry because of we’re so long, and we really caused Versailles to not reverse the ball very well because they were worried about our long arms.  We didn’t do it perfect, by any means, but we did just enough.”

Tyler Mescher and Nate Bruns did more than enough, accounting for 41 of Marion’s 52 points…exactly 78% of their scoring.  The only other Flyers to score were Nick Tangeman (6 points), and Tyler Prenger (with 5).

For Versailles, Jones’s 12 points was matched by Keaton McEldowney’s 12.  Justin Ahrens and Noah Richard each had 7.  A.J. Ahrens, who sat in the second half with foul trouble,  finished with 4.  Carter May had 3.  And Michael Stammen chipped in their final 2 points.

“Tonight was the kind of challenge we like,”  smiled Mescher, who scored his 1,000th point earlier this year.  “We’ve been waiting for this game ever since it got postponed a month ago because of weather.  We were just waiting for it – we were so ready for them.   We knew coming in it was going to be a big game, because Versailles is always good, and the motivation of taking the league lead made it even more special.  Getting this win was awesome. 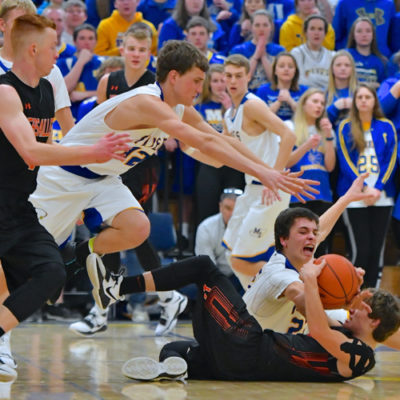 “A month ago you’d never believe we would have this opportunity, but coaches kept telling us seniors that we have a month and a half left and none of us were going to be playing after this.  So we just had to put the time in and get better.”

As for Versailles, their hopes for a share of the title are almost certainly gone, with a game at Coldwater on Friday while Marion plays New Knoxville Friday, and Coldwater next week. St. Henry finishes with Parkway and New Bremen.  If title hopes aren’t gone, the odds are certainly not in the Tigers’ favor.  Following the theme of Tyler Mescher’s words, all Travis Swank could acknowledge was his team’s need to get better, too.

“I’m sure we’re going to see the box-and-one against Friday at Coldwater,”  he added.  “And we still haven’t had any time to prepare for it in terms of practice days.  At least now we’ll get three days to work on it.”

And has the fact of three consecutive losses by such small margins taken its toll?

“We just talked about it in there,”  he shared.  “We’re losing to quality teams, where we’ve had the lead in the fourth quarter and just didn’t execute and finish the way we need to.  But playing good competition like that will only make us better in the long haul.”

After last week’s 41 points in their loss to Butler, their ‘horse’, Justin Ahrens, has been limited in consecutive games to 14 in the loss to St. Henry and 7 in Monday’s loss to Marion.

“Other guys have to step up when teams take him away,”  said Swank.  “Like Kyle did tonight.  But we’re going to have to do some things differently and find something that works for us offensively.  Justin is fine.  We just need to find something that brings us some sustainable success as a team.”

Most of that huge crowd went home happy, and a lot of them hung around to visit on the court.  It’s hard to leave the scene when your team just did what a month ago no one thought possible – have the MAC title in your hands.  It was do or die, and somehow Marion found the way to do it.

How did they do it?  They just put in the time…and got better! 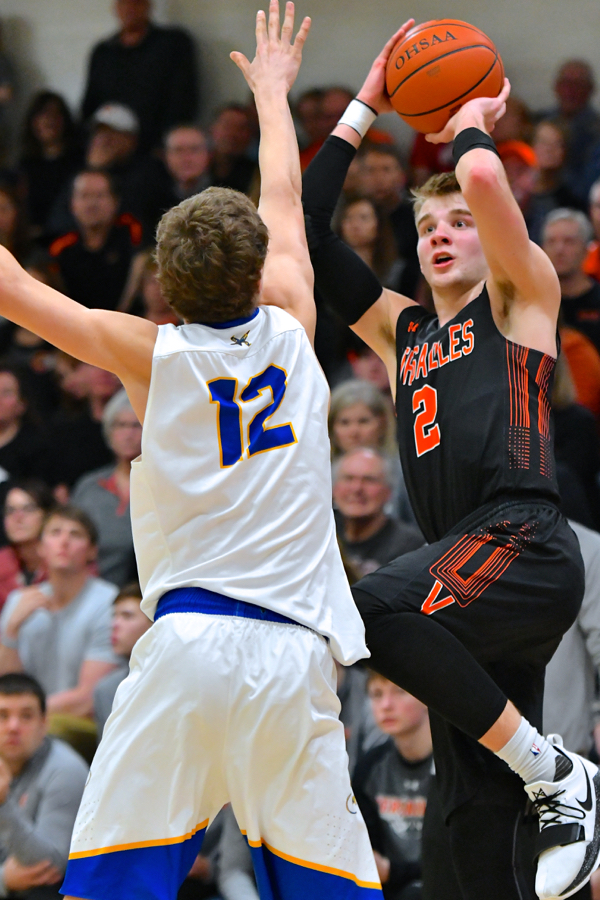 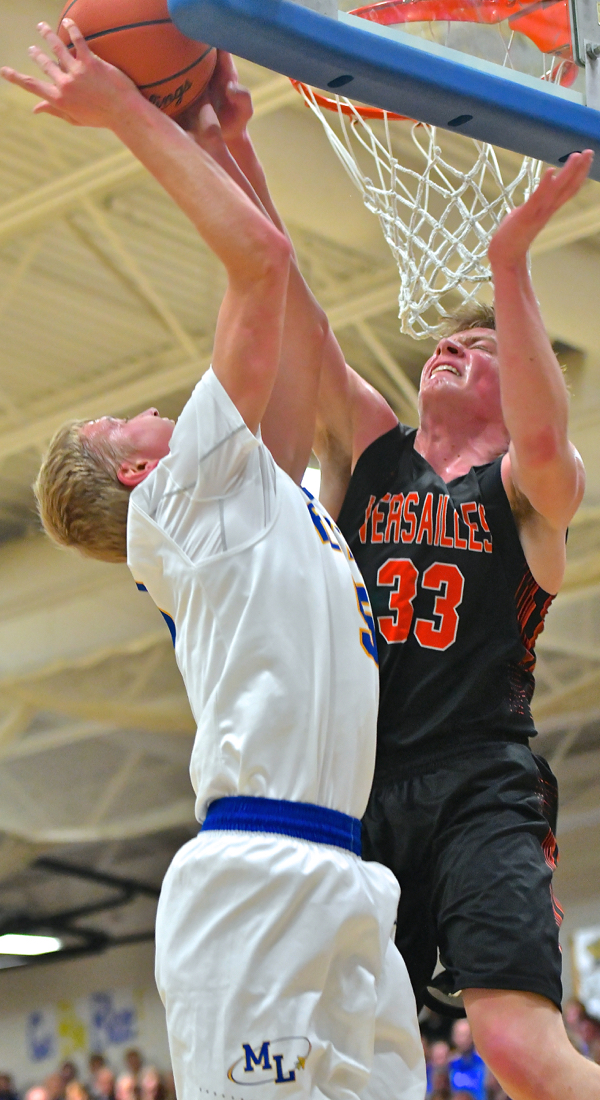