Butler’s Kort Justice returned home to Vandalia this season and joined his teammates in a defense-first approach that has the Aviators soaring.

Vandalia – During his game-breaking stretch in the first half, Butler High School senior Kort Justice – yes, his parents both love basketball – dropped in four consecutive 3-pointers as the Aviators announced their authority against the Troy Trojans.

In a span of four minutes, Justice’s personal 12-0 run against Troy blew open a game that was 15-9 early in the second quarter to 27-9. Justice’s game-high 24 points nearly outscored the Trojans, who flashed some skill but struggled against the Aviators’ high-intensity defense in Butler’s 65-29 victory Friday night.

The defensive pressure helped Butler turn a 4-3 deficit into a 34-11 lead at halftime with a 31-7 run over 11:30 of the first half. Getting 16-, 17- and 18-year olds to shoot isn’t difficult. Getting them to play lock-down defense? Well, that’s not so tough when you have a team-oriented approach like Wyrick’s Aviators. 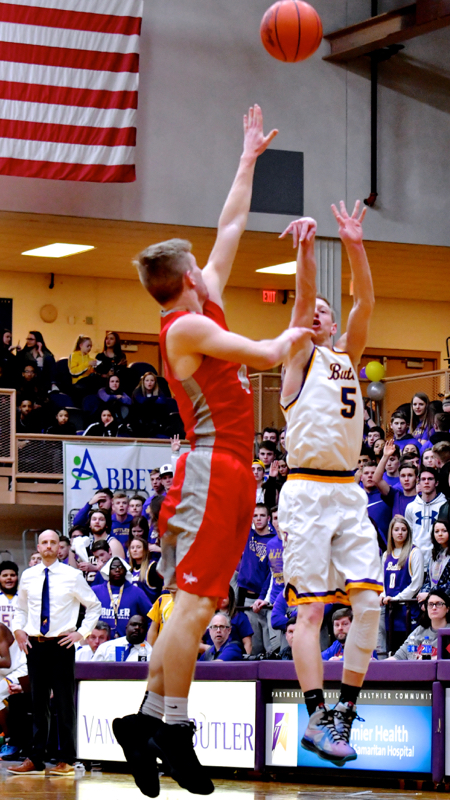 Kort Justice had a game-high of 24 points in the win over the Trojans.

“It’s not hard with this group. They really embrace defense and know that’s what we stand for,” said Wyrick, now in his third season with Butler. “We build our offense off of defense. We’d be fine winning a game 40-36.”

As for Justice, he spent the previous two seasons playing at Miamisburg. Justice – who grew up in Vandalia and played his freshman season for the Aviators – relocated back to town for his senior season. For the Aviators, it’s a true home-Kort advantage.

“We all just missed it way too much,” Justice said. “I grew up in Vandalia and I love every second of it. I’m just excited to be back.”

Justice, who leads the Aviators in scoring with 15.9 points, might not even be his family’s best athlete. That honor goes to his mom, Tammy Schiller. The Tecumseh graduate was inducted into Bowling Green State University’s athletic hall of fame in 1999. The volleyball standout was twice named the Mid-American Conference player of the year (1990-91). She participated in the U.S. Olympic Festival twice and also played professionally for a few years. 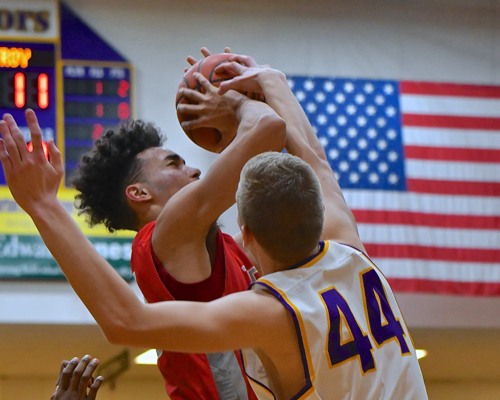 “She’s pretty special. I hope I get to follow in her footsteps,” said Justice, who plans on playing at BGSU as a walk-on. “She probably could (out jump me) in her prime back in the day. I think she can still throw it down a little bit.”

As for the Aviators, they prefer to lock it down.

Senior Sutton Skapik – a 6-foot-6 post player – prefers to alter shots than take them. He’d attempted 22 shots entering Friday’s game, but he provides the spark Wyrick is looking for on the defensive end with 4.8 rebounds and 13 blocks this season.

“Sutton doesn’t get a lot of credit because he doesn’t shoot the ball. He plays all the minutes but he’s defense, defense, defense,” Wyrick said. “He gives us rebounding and toughness. Guys really embrace their roles on this team. That’s really what makes our team special. We have guys who can do different things every night.”

“I’m all about being a team player,” Skapik said. “I want what’s best for my team and whatever it takes to win.”

On Friday that meant taking on 6-2 Troy junior Jacob Martinez, a strong and physical force inside. Martinez, who entered averaging 8.5 points, finished with four. 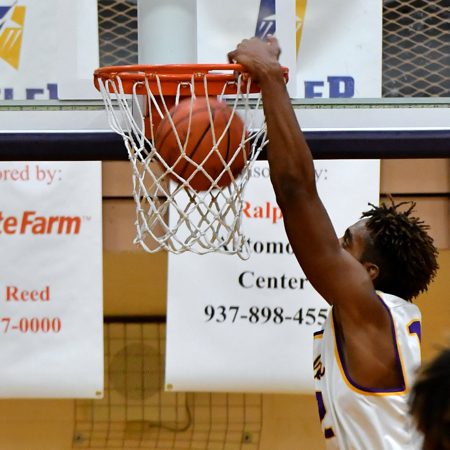 Aviator Bryant Johnson moved in with a dunk against the Troy Trojans’ defense.

“Yeah, I took a couple hits,” Skapik said of battling in the lane. “Man, it was rough. My feet are sore from that game. I’m feeling it but it’s worth the win.”

Butler’s Senior Night celebration was part of a festive evening that also included Military Appreciation Night. Recruiters from the U.S.Army, Navy, Air Force and Marines were on hand. Master Sergeant Michael Brown from the U.S. Air Force started the night with an inspiring rendition of God Bless America. The Morton Middle School Honor Choir delighted with the Star Spangled Banner.

With Butler sitting some starters for an all-senior lineup, Troy jumped out to a quick 4-0 lead. Wyrick got his regular starters into the game and the Aviators took it from there.

Butler senior Michael Kreill responded with seven of his nine points in the first quarter.

“I think the emotion of Senior Night may have gotten to a few of our guys,” Wyrick said. “Kreill, he’s steady and he’s consistent. We relied on him early to get us some baskets and get us going.”

“DJ stepped it up. He was very physical tonight. He rebounded the ball and he’s such a game changer because he can alter shots around the rim,” Wyrick said. “Our defense is excellent when he’s out there because if a mistake is made he’s there to clean it up.” 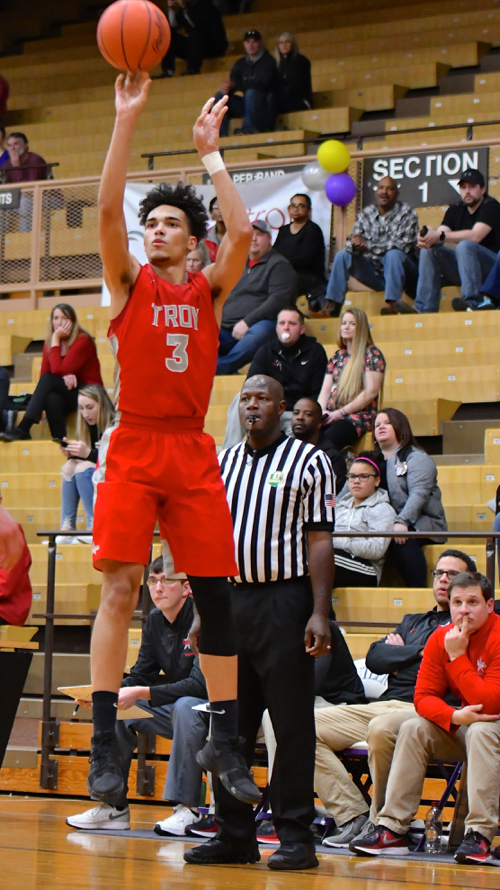 Troy’s Zach Kreill tapped in as the Trojan’s top scorer with 7 points in the loss to the Aviators.

Butler has gone from 4-19 in Wyrick’s first season to 13-11 last season and now 18-2. Butler hosts Sidney (10-3) on Tuesday for a chance to win the American North division outright.

On Sunday, area coaches get together to vote for the seeds and place their teams on the bracket for the sectional tournament. Wayne and Springfield are pretty much locks for the top two spots. Wyrick likes the Aviators’ chances to get in at No. 3.

“We just have to see how it shakes out,” said Wyrick, who spent time at Wright State University as the Director of Player Development and a Graduate Assistant under coaches Brad Brownell and Billy Donlon.

Added Justice: “From the beginning of the year we were talking and we knew were going to be something special. Now we’re putting it into action. We’re thinking we can be pretty special. We hear people talking about Butler is going to make a run. We’re hoping we can prove them right.” 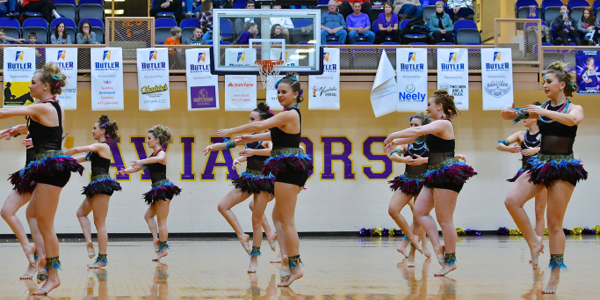 Half-time entertainment was a performance by the dance team from Vandalia.

“Bunker’s” is proud to sponsor coverage of GWOC Basketball on staging.pressprosmagazine.com. 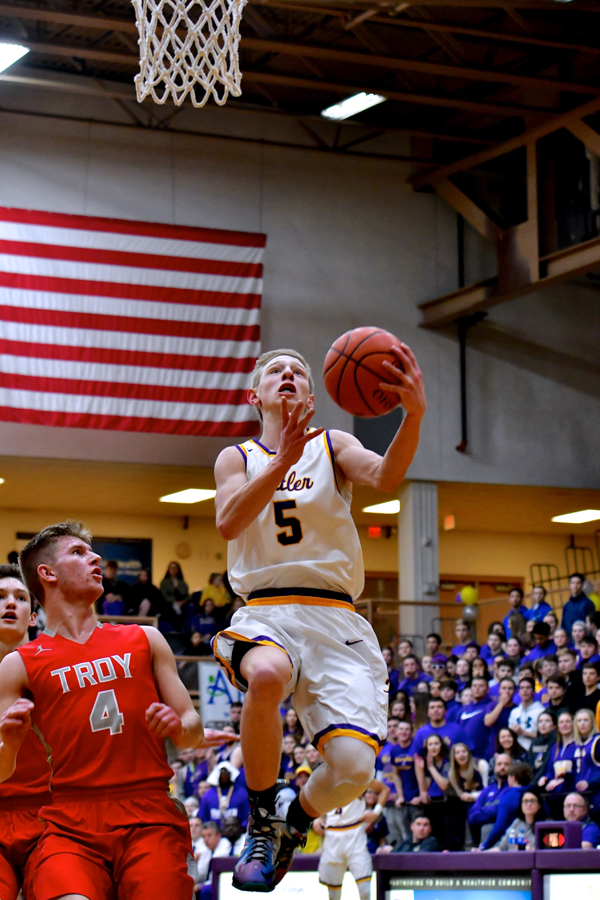