The Flyers enjoyed a rare shooting night to remember Wednesday, and atoned with emphasis an earlier loss to the Duquesne Dukes.

Trey Lander’s sails to the rim with an impressive one-handed dunk (above).

DAYTON — It was as if at halftime the University of Dayton basketball team had GPS implanted into their kneecaps.

The Flyers weren’t awful in the first half against Duquesne in University of Dayton Arena. They shot 46 per cent (11 for 24), a respectable effort, a passable grade.

But they only led the Dukes by three points and they had scored only 29 points — nothing to boast about or to protrude their chests.

Then came The Shot Explosion.

And they didn’t stop there. The basketball kept falling into the basket like olives on a pizza and when the final 20 minutes were over the Flyers had set a second half shooting percentage school record. 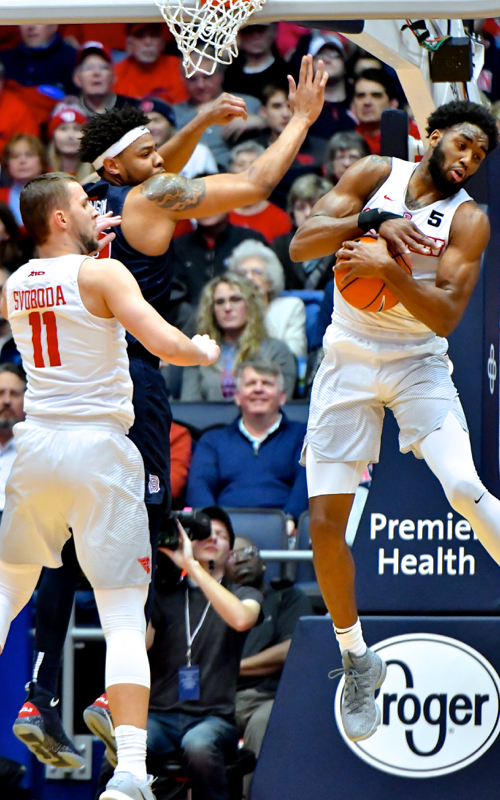 Josh Cunningham finished with a double-double….11 rebounds and 21 points for the Flyer’s win.

It was retribution and a pound of flesh for the Flyers. Their first Atlantic 10 game of the season was at Duquesne and the Dukes force fed UD a 70-62 defeat.

Remember the University of Houston team known as Phi Slama Jama because the entire team delighted fans with slam dunks and jam dunks and thunderbolt dunks?

He had three more Wednesday night. And he missed one. In fact, he missed his first three shots early in the game, something unusual for a guy shooting 68 percent for the year, sixth in the NCAA.

Before the night was over, though, he made 8 of 13 and five of six from the foul line for 21 points. Amd he snagged 11 rebounds, his eighth double/double.

Yes, he had three dunks, but The Dunkin’ Donut Dunk of the Night belonged to Trey Landers, he made six of 10 shots for 12 points and added nine assists. 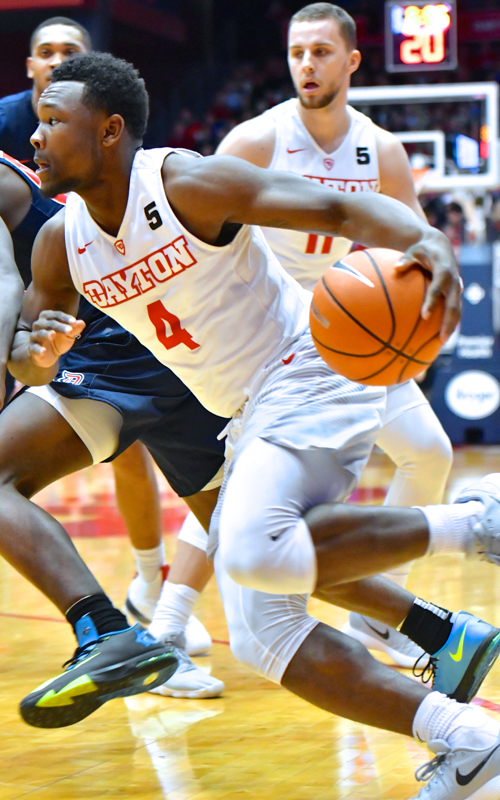 Jordan Davis hit seven of eight shots (4 of 5 from three) and added 18 points for the Flyer win.

The Flyers constructed a 20-point lead in the second half, 56-36. Duquesne, though, put on a mini-run that cut that lead to 13 late in the game.

That’s when Landers took the ball at the top of the lane, faked a pass and motored around his man as if the guy was a stationary traffic cop. Landers finished it with a ka-boom slam dunk.

Most of the 13,245 roared approval and Duquesne slinked down the court, a beaten troupe.

Darrell Davis, the team’s one senior regular, shot only eight times, but made five and was 8 for 10 from the foul line for 20 points. The Flyers made 18 of 22 free throws.

Davis, though, is the judge. He was asked his opinion of the dunks and whose was better and who is the better dunker — Cunningham or Landers?

“The dunk that stood out tonight to me was when Trey came down the lane on a fast break and the guy guarding him hestitated and then the basket was like BOOM!,” said Davis.

“Cunningham is a great finisher at the basket, especially with dunks,” said Davis. “He is one of the best in the country that’s great to have him finish for my assists and Jalen’s assists.”

Jalen Crutcher shot only three times and scored eight points, but he had nine assists and no turnovers, amazing numbers for a point guard who played 29 minutes. 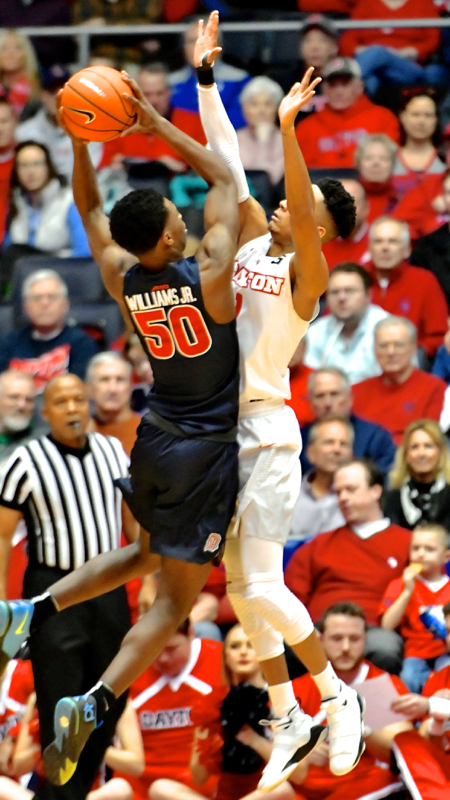 Who is the better dunker, DD?

“If you want a freestyle dunker you better go with Trey,” he said “In game dunks, though, I’ll go with Josh.”

Once again, as he has done in recent games, coach Anthony Grant has extracted as many minutes as he can get out of his five starters, playing them until their tongues hang out.

Landers played 38 of the 40 minutes. Jordan Davis played 37 and the soft-spoken freshman from Irmo, S.C. was magnificent. He hit seven of eight shots (4 of 5 from three), had five assists and one turnover for 18 points. Darrell Davis payed 34, Cunningham played 32 and Crutcher played 29.

The only bench players to log noticeable time was point guard John Crosby (15 minutes), as he spelled Crutcher to fight Duquesne’s pressure.

Asked if all this playing time lately is tiring, Darrell Davis said, “As a senior, I don’t want to ever be tired. I probably think more about it for my home games, but I just want to play all the time I can get until I can’t play no more. I credit Coach Grant for leaving me out there to lead the team.”

The Davis, unrelated Jordan, is seeing more playing time than he expected as a freshman, but is grasping it with both hands. 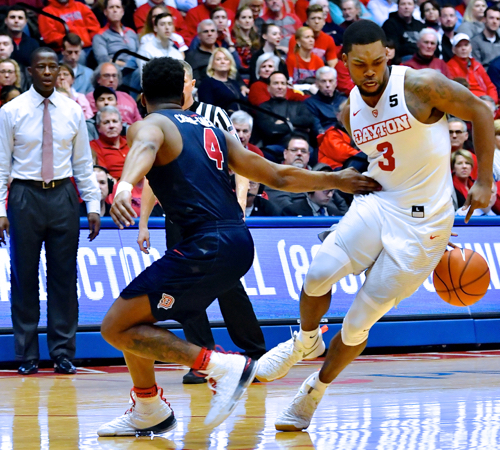 Trey Landers makse a move downcourt against a Duquesne defender.

“I was pretty tired late in the game but afterwards I was all right,” he said. “Even though it is a long season for a freshman, physically I’m good. I’m young.

“It feels good that the coach has confidence enough in me to play me that much,” he said. “That’s all you want is confidence from your coach.”

Grant, despite the record-setting second half shooting performnce and the 88 points, wanted to talke about defense.

Duquesne’s Mike Lewis came into the game as the Dukes’ leading scorer at 15.6 a game. Lewis was 0 for 6 from the field and had four free throws when he made his first shot with 4:44 left and the Flyers up 68-52. From there he ended up with 12 harmless points.

“After losing to Duquesne in our league opener, our guys were really focused and motivated,” said Grant. “They understood what we had to do. The first half we were really locked in defensively. We tried to duplicate the defense or play better and play better offensively. Obviouslu, you look at the numbers in the second half and our guys did an outstanding job.” 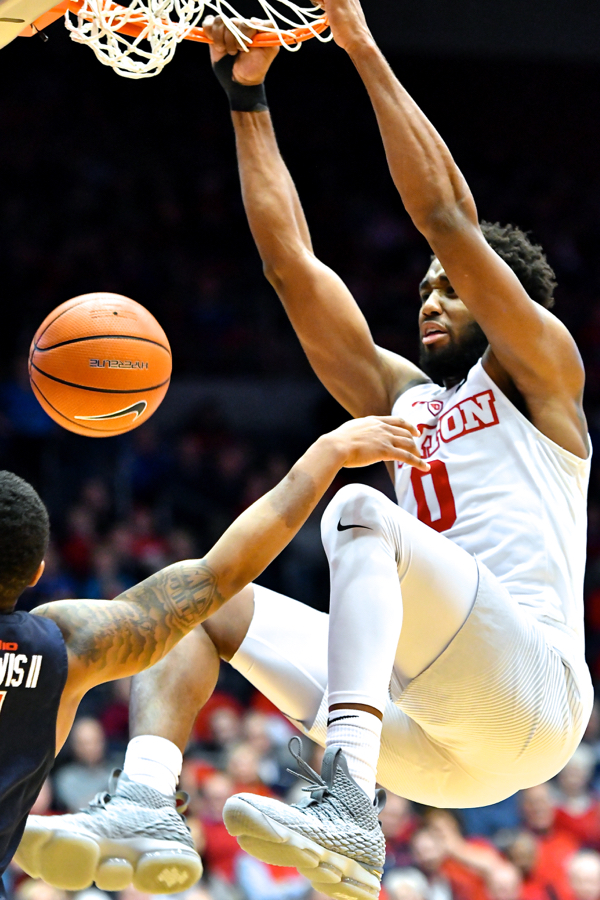 Josh Cunningham had three dunks on the night, adding to his game high of 21 points.

Dave Arbogast is proud to sponsor coverage of UD basketball on staging.pressprosmagazine.com 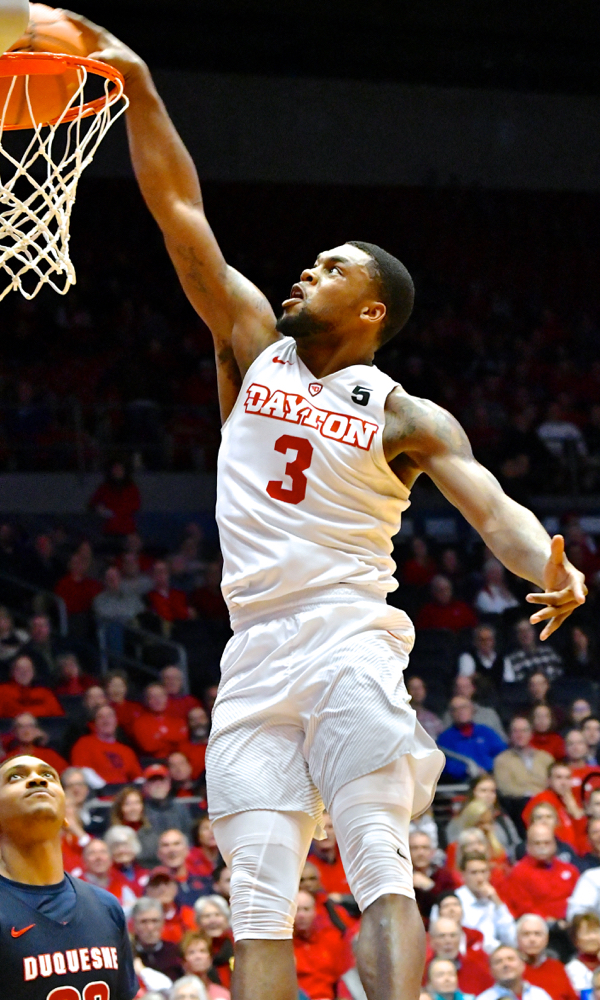 Trey Landers had one impressive dunk, 12 points, and 9 points in the Flyers' win over Dequesne. (Press Pros Feature Photos By Julie McMaken Wright)