New Flyer baseball coach Jayson King kicks off his inaugural season at Dayton next weekend with optimism over some things old, some things new, some borrowed baseball wisdoms…and of course, new blue uniforms.

Dayton – At the very depth of last year’s frustrating 20-35 record…a friend and former baseball alum from Wright State asked me, flatly: “Hey, why are you following Dayton and not Wright State? They’re the baseball school in town.”

And of course there was merit to his question. The Raiders have dominated Division I college baseball in Montgomery County recently, while the Dayton Flyers have struggled since their breakout year of 2012 when then coach Tony Vittorio took them to the NCAA tournament.

But if you would pose that question to the new sheriff in town – first year Dayton coach Jason King – you’re apt to get a casual glance and a wry smile. Without a lot of words or hyperbole, King – who came from a background at Division II Franklin Pierce, where he led that school to ten conference championships in 18 years, seven trips to the Division II NCAA northeast regional tournament…and seven trips to the Division II NCAA World Series – is totally invested in making the best of a perceived bad baseball situation at Dayton.

“If kids are looking past Dayton as a Division I baseball opportunity that’s a mistake,” he said this week. “We’re going to surprise some people.”

Note, he didn’t say they were going to set the world on fire in his first year at Woerner Field – just surprise some people, and most notably…the doubters.

“We’ve got some pillars to build on,” he said earlier this week as he observed afternoon practice at UD’s indoor hitting facility. “There are some kids here who are good baseball players. 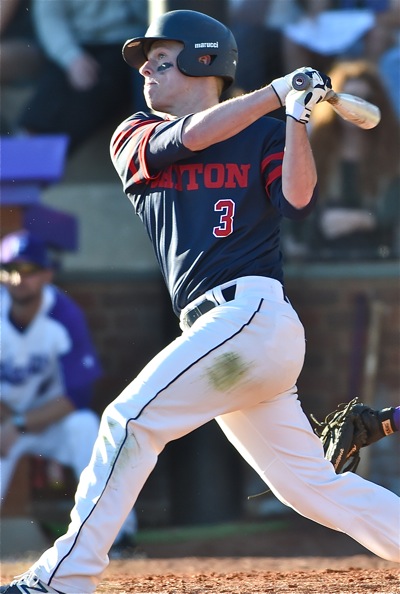 Junior Connor Echols (Sidney) is a pillar to build on in 2018.

“Connor Echols (Jr., Sidney, Oh) is a baseball player,” said King. “He hit one out (in January) the other day when the weather was warmer and we could get outside.

“Brantley Johnson (Soph., Indianapolis Cath. Latin) can play at shortstop, and batting at the bottom of the order he’s like having back-to-back leadoff men in the lineup.

“And Brandon Smith ( R-Soph., Floyd Knobs, In.) is not only our best power hitter, he’ll probably be the closer in the back end of our bullpen. His arm is healthy again and he throws 90-plus.”

Four pillars in the middle of the Flyers lineup – but in the next breath King scans the room and points out one after another who return in 2018 from a 20-35 record…older, wiser, and better.

“We had some come in for fall practice and didn’t look any different than last spring, strength-wise,” says King. “And I said, ‘What have you been doing?’ When they came back for winter workouts you could tell…they’d been working.”

Most recently King, a native of Boston, coached last year at West Point – Army – and he looks and talks the part. Bearing a resemblance to a mix of Frank Sutton (who played Sergeant Carter) and professional golfer, Notah Begay, he’s walking, talking optimism for the short-term future of the Flyer program!

“There’s nothing wrong with some the kids who were here last year,” he contends. “We’re just going to go at some things differently this year.”

And he gets to stick his toe in the Division I water next week, the NCAA opening weekend, with a trip to South Carolina to play USC-Upstate, Wofford, and Evansville. 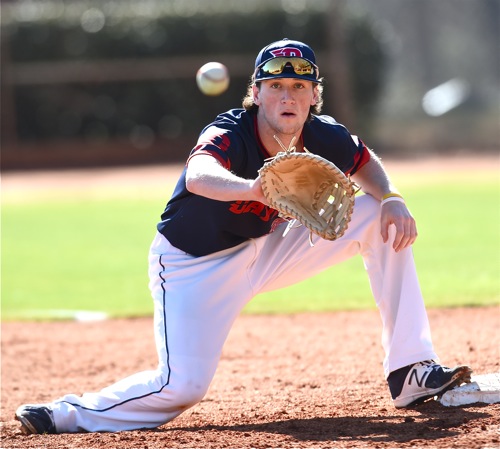 Sophomore Tate Hagan can play first, or he can play in the outfield. But he WILL hit!

“We have some guys here who are going to hit,” he assures. And that’s welcome news, because the Flyers struggled with consistency at the plate in 2017, hitting just .244 as a team. The guys in the other dugout raked at a .292 clip…so it’s hard to win when there’s that much disparity.

But in the next breath, a borrowed baseball wisdom that states if you don’t pitch…it doesn’t matter how much you hit.  King, like many baseball coaches, is wait-and-see concerning his team’s ability to pitch, or pitch better. The Flyers finished with a team ERA of 5.63 – too many runs given up to compete with a cumulative opposing ERA of about a run less per game. Even harder to win when you get out-hit…and out-pitched!

“Bunkers” is proud to sponsor coverage of Flyer baseball on PressPros Magazine.com.

“We have some good-looking arms, though,” he contends. “Jordan Cox (Zionsville, In.) is probably at the top of our weekend rotation, then Austin Cline (Benjamin Logan), and Tyler Jones (Bellefontaine).”

All saw substantive service last year, and return…yep, you got it – older, wiser, and better.

And behind the plate…junior veteran Bailey Montoya gets his first duty as the club’s everyday receiver. 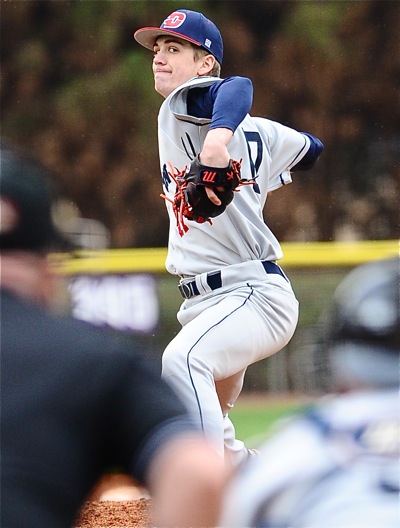 Sophomore Jordan Cox is one of the hopefuls among a host of returning Flyer pitchers.

Riley Tirotta, (Fr., South Bend, In.) is one that King calls a “natural looking hitter.”

Trey Fulton, (Jr., New Albany, In.) is also in the mix of those new faces that portend change and progress.

And the Flyers, King promises, are going to need that to contend with an upgraded schedule going forward. In addition to their Atlantic-10 Conference schedule this year, UD has added a non-con date with SEC perennial Arkansas (in Fayetteville Feb. 28 and March 1st) – and future dates with Georgia and Vanderbilt, SEC powerhouses.

Optimistic? Assuredly. But Rome wasn’t built in a day, and King is using that perspective as his message to future recruits – that there’s an immediate opportunity for them in his blueprint for Flyer baseball – the same school that produced Craig Stammen (Padres), Jerry Blevins (Mets) and Mike Hauschild (Rangers).

As for future comparisons to Wright State, bring your yardstick to Woerner Field on March 9th, when the Flyers see how older, wiser, and new works against the Raiders.

So…why Dayton in 2018?  Jayson King, ex-Army man with all those wins at Franklin Pierce, would likely answer.  Why not Dayton? 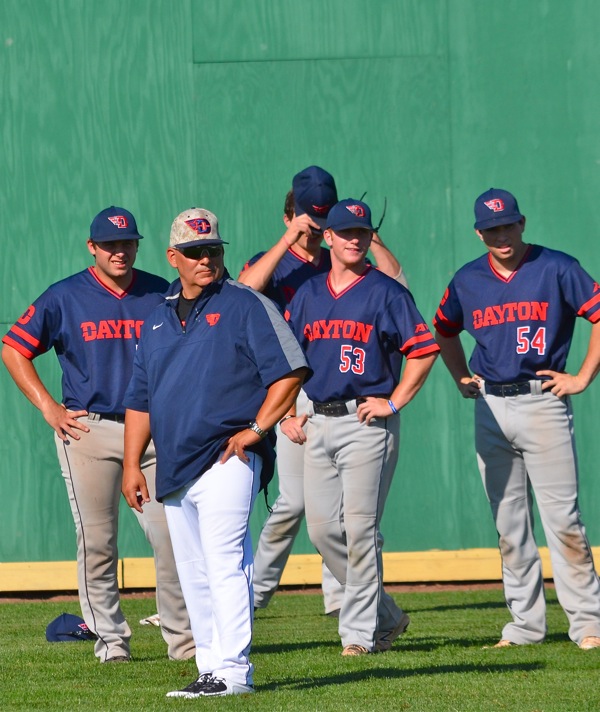 Everyone has gotten a look and now new Dayton baseball coach Jayson King gets to see how the pieces mesh with next week's NCAA opening weekend in South Carolina. (Photos Courtesy of UD Sports - Press Pros Files)