Give Me Your One Best Reason To Watch The Super Bowl…

Fifty two years ago I watched the first Super Bowl in its entirety, and thought it was ‘Super’.  Now I just watch until I get tired of the commercials.  And I’m not alone.

If I watch the Super Bowl at all – any of it – on Sunday it won’t because I’m enthralled with the football.

Hell with that;  my interest in football stopped on New Year’s Day, with the four major college bowl games.  Even the national championship game a week later only brought me mild curiosity…because I really didn’t know much about Georgia.  And the way they played against Alabama was entertaining – interesting.

You see, it’s not that I don’t like football, because I do.  I love the game, but I loved it before it got to be a political controversy…and a threat to life itself because of the violent nature of grown men playing for money and their legacy.  Hence, I like it best on Friday nights and Saturday.  But the NFL…nah!

I’m tired of the politics, and not standing for the national anthem.

I don’t watch football for a lecture on social injustice, because I don’t care about social injustice on Sundays.  Everyone deserves at least one day off from the issues of the world, and Sunday is mine.

There’s a lot of things about the NFL that I find distasteful, but at the top of the list is the sense of cultural entitlement exhibited by too many of its players.  You see, I really don’t care about tattoos and piercings – and their having a ‘stage’ to voice a message about police brutality and injustice.  Those things happen to other people, too, and their lives (or so we’ve been taught) matter just as much.  So then, when the message and the cause is questioned, they resort to saying…that we’re all in this together.  Really?

I personally prefer the Max McGees of Super Bowls past.  Players that got paid $8,000 a year and stayed out all night drinking before the game.  McGee caught two touchdown passes in Super Bowl I with a hangover.  Players that sat naked in the locker room with their legs crossed and smoked a cigarette during interviews after the game.  Then, they went home the next day and started selling Mercurys at the local dealership, like McGee did.  He  died a few years ago when he fell off his roof trying to clean leaves out of the gutter.  You think Tom Brady’s going to go out like that?

For that matter, I think there are too many NFL teams – teams that aren’t very good, but yet get marketed and priced like New England and Philadelphia.  The Bengals, for instance, need to find a new home…in London, perhaps.  And the Browns could go with them to provide whatever the Brits might accept as competition.  That way we’d be done with the anticipation for improvement every year (and subsequent disappointment), and get back to what Ohioan’s used to do in October and November – hunt for rabbits and squirrels. 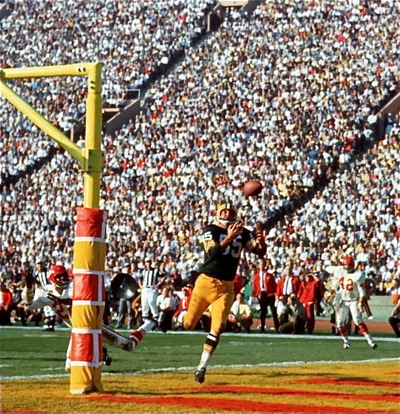 Green Bay’s Max McGee scoring one of his two touchdowns in Super Bowl I.

The Super Bowls are a bore to watch…because they’re too long.  There’s too many timeouts, too many commercials, and too much useless personal information about the players.  Who cares if the punter’s uncle is blind and worked three jobs to see that his nephew had kicking shoes in high school?  My cousin was blind as a bat and worked as a watch maker for 40 years.  Huh?

There’s too much Tom Brady.  I don’t care if he’s 40 and still playing…because I know a lot of people that are 40 and do more physically demanding labor than him.

I’m tired of hearing about his wife, too.  I get it that she’s a model;  and she might be hot.  But there’s women right here in the area that look just as good – women that wouldn’t turn up their nose at a Big Boy for lunch…if you offered to buy them one.

I don’t care about Bill Belichick, and never did.  Good coach?  Sure, but I doubt if he’s better than Tim Goodwin at Marion Local…or has the patience that Goodwin has to teach and win with players far less skilled.

Coverage will start at about 11 am on Sunday and drone on for seven hours until kickoff, but it’s not for me.  I plan to watch the Blue-ray version of Gettysburg, the director’s cut narrated by Dr. James McPherson.

Or, I might watch the old Jimmy Steward movie, Harvey, because my family says I don’t have a sense of humor, or laugh enough anymore.

For sure I’ll work a few hours on next week’s Press Pros content;  but I won’t waste a day watching bios of Carson Wentz, and what a shame he has to sit out the Super Bowl – or whether Nick Foles is up to the task.

I’d even squirrel hunt if the season hadn’t ended in January…when football should have ended.