The 174th meeting between the Anna Rockets and Fort Loramie Redskins was a doozy…as the Rockets rallied from an early 13 point deficit to take down the state’s #1 Division Four team in overtime. 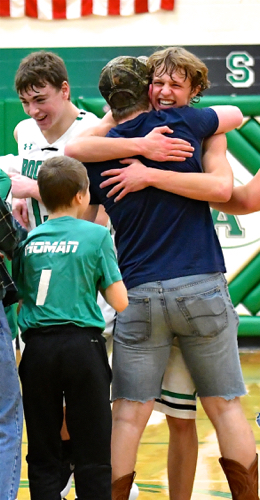 Wyatt Bensman celebrated the moment after the win against Ft Loramie.

After two postponements, after 55 days of the regular season, after 14 games apiece, the Fort Loramie Redskins and the Anna Rockets finally stepped onto the court against each other Tuesday night.

Loramie entered the game, the 174th between the two schools, 14-0 and 6-0 in the Shelby County League. The Redskins had been living on the edge of late, winning three of their last four games by a combined 8 points, including two in overtime.

So one would expect that Loramie would have the advantage, should the game be close.

Or so one would have thought.

Anna held the Redskins without a field goal for almost 12 minutes in the fourth quarter and overtime and rallied for an exhilarating 54-50 win before a packed house. The win threw the Shelby County League race into a three-way tie among Fort Loramie, Anna and four-time defending champion Russia. All three teams are 6-1 with 5 league games remaining. It also gave the Rockets a 90-84 series lead, for those who care about such things. 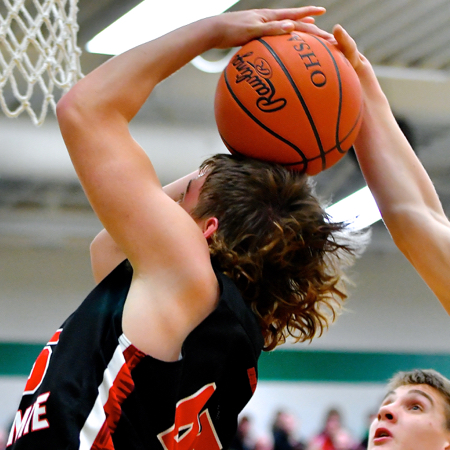 Austin Siegel’s shot attempt is held back by an Anna defender.

“We were really stagnant early,” said Rockets head coach Nate Barhorst.  “We weren’t sharp making our cuts and they really dictated what was going to happen for us. We didn’t shoot the ball well either in the first half. We shot better in the second half, made some hustle plays, and got some confidence as the game went along.”

“A lot of credit goes to Anna,” said a disappointed Loramie coach Corey Britton. “They got every 50-50 ball, they rebounded and they hit some big shots when they had to. We didn’t finish tonight. That game was ours for the taking, but they wanted it more than we did.”

The game see-sawed through the early moments, with the lead changing hands five times in the first quarter alone. The Redskins led 10-8 after 1, then scored 11 straight points to open the second quarter as the Rockets went 8 minutes without a point.

Griffin Doseck and Joel Cathcart hit shots before the break to break the Loramie run, but the Redskins carried a 21-12 lead to the locker room.

Anna’s offense picked up somewhat in the third quarter, but five turnovers in the quarter kept the Rockets from making a serious run. Until, that is, Doseck and Mason Platfoot nailed back to back threes to narrow the gap to 34-29 after three quarters. 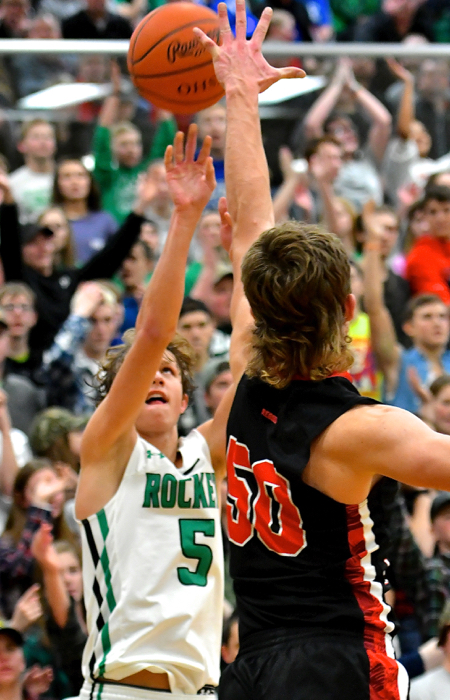 Wyatt Bensman takes a three-point shot in the overtime win against Loramie.

“We lost our aggression in the second half,” said Britton. “We were up five with about 2 and a half minutes left, and that’s about the fourth time this year we haven’t been able to hold that lead. We don’t have any way to milk the clock right now and that’s on me. I have to find a better way to get our kids into situations where they can succeed, because I absolutely failed tonight.”

Very few among the crowd bothered sitting during the final eight minutes. Platfoot drilled a three to finally get the Rockets even at 38, and Wyatt Bensman hit an even bigger triple, tying the score at 43 with a minute left. Loramie held for the final shot but couldn’t connect, and it was time for bonus basketball.

The Redskins did not make a field goal in the fourth quarter and that trend continued in overtime. Bart Bixler, a 5-11 sophomore, made the play of the night, scooping up a loose ball while seemingly on the seat of his pants under the Rocket basket. His shot somehow went in, as he was being fouled, and the following free throw gave Anna a lead they would not relinquish.

“That was a big play, obviously,” acknowledged Barhorst. “That’s a 50-50 ball there and he makes the play to give us the lead. Then Riley Huelskamp comes up with that steal on the sideline to help seal the deal. I have to give all the credit to my kids, and to Loramie. That’s a great basketball team that we beat tonight.”

Bensman, who was a perfect 4-4 at the line in overtime, led the way for Anna with 17 points, 14 after intermission. Doseck and Platfoot both finished with 9 for Anna.

“We didn’t panic when we were down by 13,” Bensman said outside the Rockets locker room. “I was really surprised by that. Nobody dropped their head when things weren’t going well. We kept our heads up and just kept working. 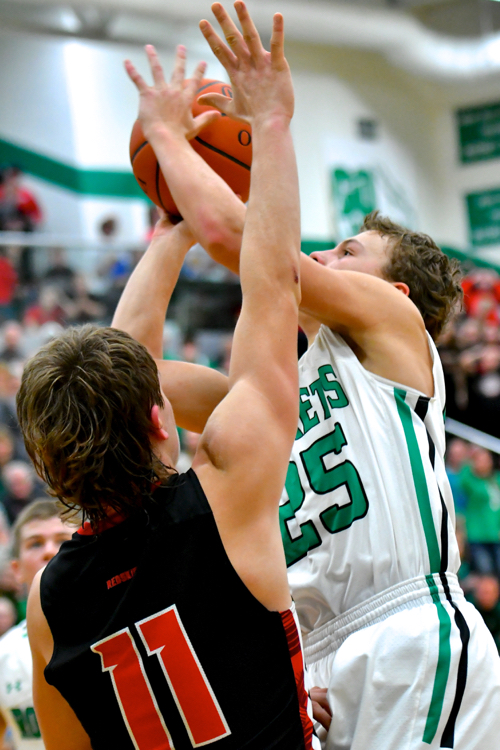 Anna’s Bart Bixler put the Rockets in the lead after being fouled.

“I just wanted to get off of eight,” the 6-2 senior said with a grin. “I really thought once we scored again we would get back in the game. It just seemed like we were stuck on 8 forever.”

Fort Loramie shot 48% from the floor, 27% from the arc, and 71% from the line. The Redskins, however, missed 6 free throws in the fourth quarter, any one of which would have made the difference.

“We quit doing the little things late in the game,” Britton explained. “We didn’t respond when we got punched. Anna executed better than we did. The fact that we have been winning close games has clouded over some things, like not being able to hold a lead. Again, that falls on me, and I feel terrible that I cheated our kids.” 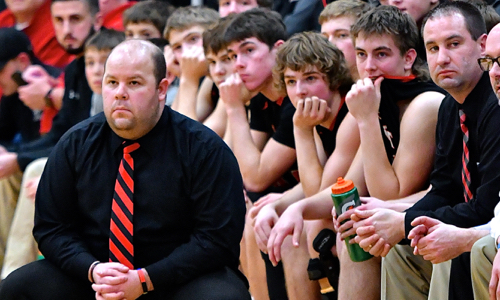 A picture says a thousand words for Corey Britton and the Redskins.

“We knew one of these close games would go our way,” the Anna coach continued. “We have been in this situation before. We have gone over game end situations in practice, and the guys just wanted to get over the hump and finish. We executed at the end and that got us the win.”

What about that game-tying shot with a minute to play?

“I hit that and thought “did I just do that’? I wasn’t shooting the ball well at all early in the game. I guess one of them was bound to go in. I’m just happy that one fell.”

“This is a big, big win for our program, one of the biggest we have had,” said Barhorst, now in his 7th season as head coach. “Of course, we went to state back in ’08, but as far as a regular season win is concerned, beating the number #1 team in the state, and having that be Loramie as well, it’s pretty sweet.” 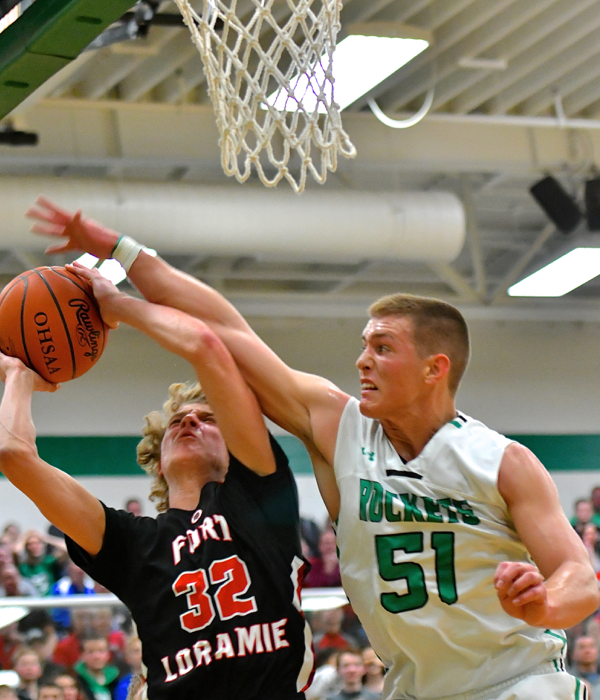 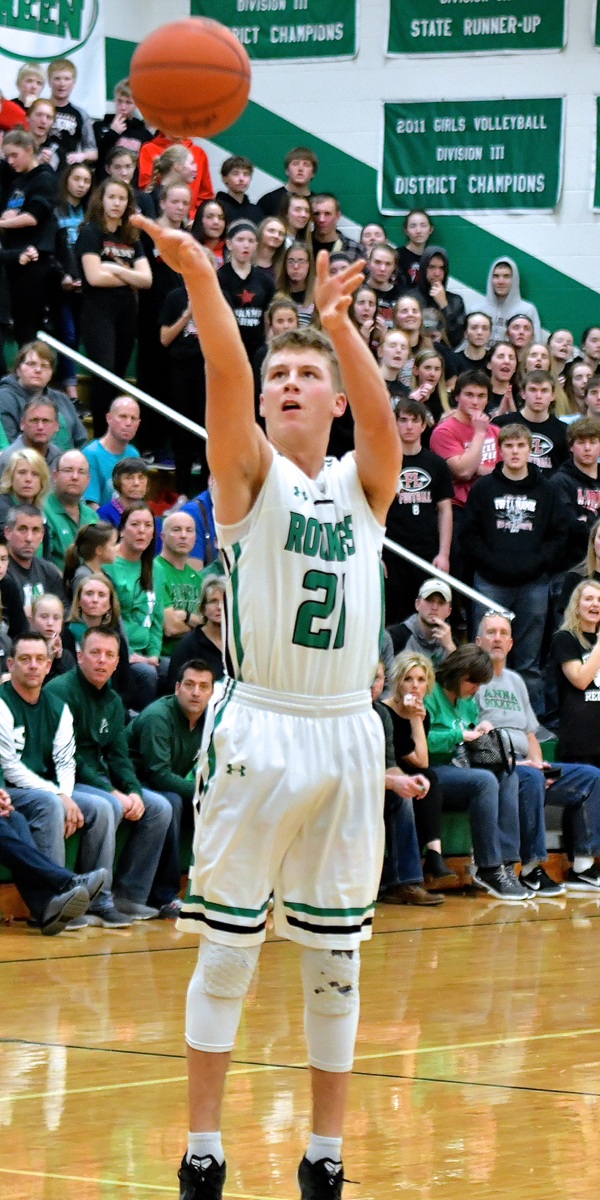 Anna's Mason Platfoot drilled a three to tie the game for the first time at an even 38. (Press Pros Feature Photos By Julie McMaken Wright)