Hometown Rivals: Sidney Too Much For Lehman…

Sidney had too much size and too many weapons, handing Lehman a 69-44 loss in Sidney’s version of a cross-town rivalry.

Sidney’s Andre Gordan nails a three-pointer adding to his 15 points against the Cavaliers.

But a glance at their schedule says the Cavaliers just might be one of the bests 3-9 teams in the state. Lehman three of the losses are by three points or less. Three more are by between six and nine points.

“I don’t want to say those were good losses,” Lehman coach Tim Gleason said, “but we were right there with every one of those teams. Then we played a couple games where we didn’t play to our potential. Our confidence was a little bit down.”

The Cavs picked it back up on Saturday during a 69-44 loss to crosstown rival Sidney (9-5). Sure, it was the Cavaliers largest loss of the season. But there were several things the D-IV Cavaliers felt they could build on after some bright spots against a D-I Yellow Jackets team that simply proved too big, too fast and too athletic.

Junior Logan Bunker returned to the Cavaliers’ lineup for the first time this season, scoring 12 points – joining senior Preston Rodgers as the leading scorers – and grabbing six rebounds. Bunker, who has played basketball for Gleason since the seventh grade, transferred to Sidney High School prior to this school year. But he missed basketball and elected to come back to Lehman. 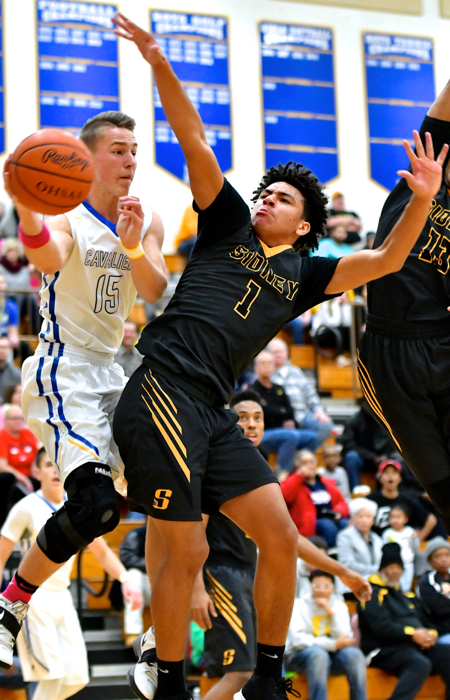 Lehman’s Preston Rodgers is cut off on the baseline by the Yellow Jackets’ defense.

“He’s going to really help us. He’s a strong kid,” Gleason said of Bunker. “He gives us an inside presence and strength in there that’s going to help us as the season goes forward.”

Lee, who leads Lehman with 13.2 points and 8.6 rebounds per game, was limited against Sidney with foul trouble. He picked up two in the first quarter and sat much of the first half. He finished with 10 points.

“We feel like we’re going to be putting together some real nice games and we hope they turn into victories,” Gleason said.

Sidney (9-5) knows that feeling. The Yellow Jackets had their confidence shaken with a 65-50 loss to Versailles at the Flyin’ to the Hoop tournament and then a 67-56 loss to Centerville. They bounced back Friday night with a 65-44 win against Fairborn, then followed it with Saturday’s win at Lehman.

“We were expected to win, but we’re not playing at the level yet where we can come in and think we’re going to dominate anybody,” Sidney coach John Willoughby said. “The kids are really working on what we’re practicing. Our energy is picking up. Our team defense is picking up. And high percentage shots. The kids are trying to apply that to the game.” 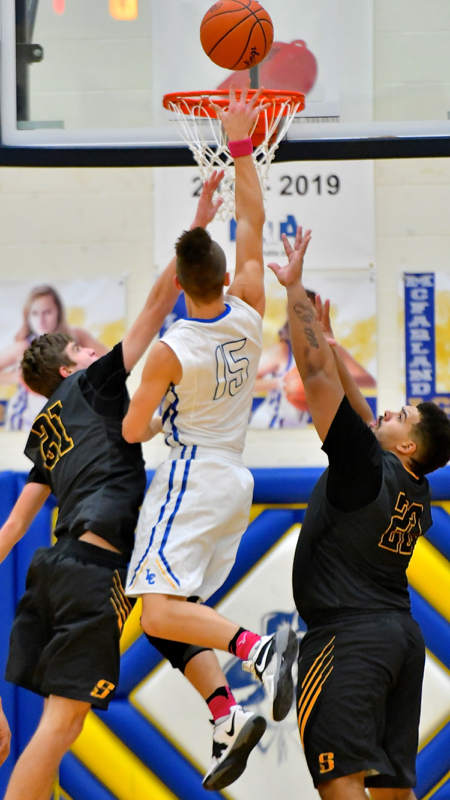 Lehman’s Preston Rodgers (#15) was high scorer for the Cavalier’s with 12 points.

The Yellow Jackets were sharp with their passing game and worked the ball in the post. They also aggressively attacked the rim for a sizable 30-16 rebounding advantage.

“We know we can score. But you’re not going to win the game if you can’t play defense,” senior forward Devan Rogers said. “They were making some tough shots. We did the best we could to make them shoot outside.

“We had two losses and we wanted to change the momentum. We wanted to come out with fire. We definitely wanted to win this game but we didn’t take them for granted. We tried to get everybody involved.”

Rogers scored 19 points to lead four Yellow Jackets in double figures. He also had a team-high 11 rebounds and handed out four assists.

“He’s athletic, he’s a good defender. We like his energy and his defensive intensity,” Willoughby said. “He’s good around the basket on fast breaks. We inserted him in the starting lineup to give us a boost.”

Sidney led 15-12 after the first quarter, then used a 13-0 run – highlighted by Roberts, Gordon and Rogers – to take control in the second. Sidney led 17-16 with about seven minutes left in the second quarter when the run started and boosted it to 30-16 with 2:51 to play. 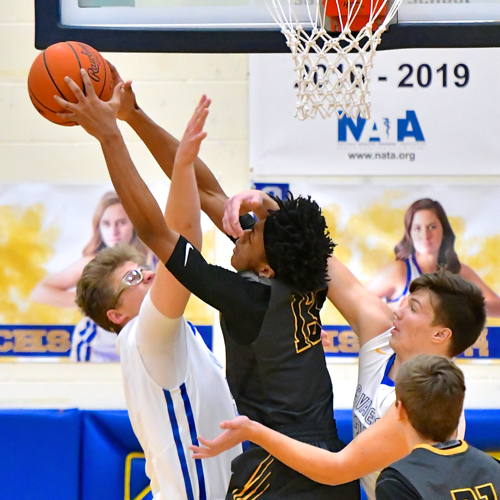 Sidney’s Ratez Roberts gets a hand in the face while rebounding in Saturday’s win over Lehman.

Sidney’s biggest lead (27 points) came midway through the third quarter, going up 49-22 on Taborn’s steal and layup for a season-high 10 points. He entered the game averaging 4.7 points.

Lehman answered with a run of its own. The Cavs scored the next 13 points to cut the deficit to 49-35 with 1:14 left in the third. Five different players scored during the run – Ryan Schmidt, Lee, John Cianciolo, Rodgers and Bunker.

“We had that nice run at the end of the third quarter so the kids never quit,” Gleason said. “We leave here with as close as you can call it a moral victory. I was pleased with how the kids played. … The kids’ attitudes are real good and we felt good about our effort tonight.

“I enjoy playing quality teams because it gets you ready for the tournament. I like my kids to be challenged. And we’ve been very challenged so far. Hopefully we have some games coming up where we have our moxie and we’re ready to go.” 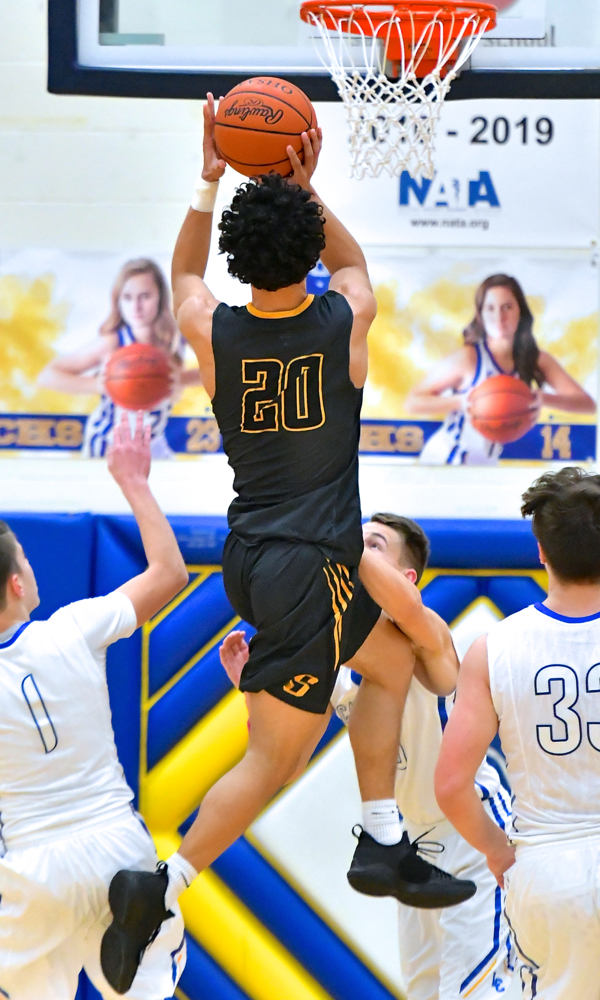 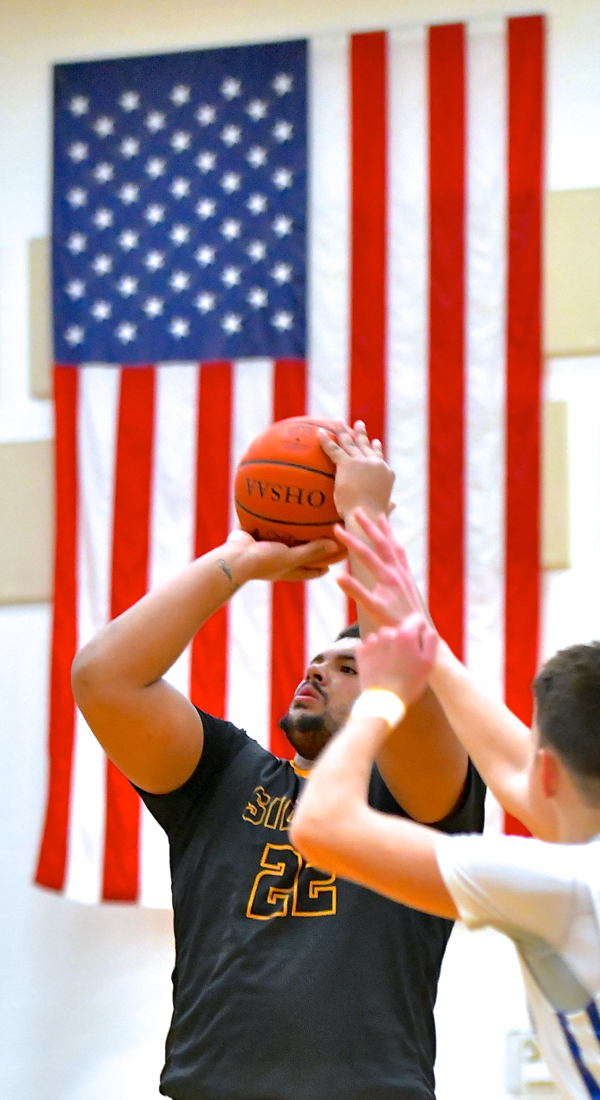