The Flyers set a school record for made ‘threes’ (17), and all five starters finished in double figures in a blowout win over Virginia Commonwealth.

The weather outside was frightful, but the basketball inside was delightful — if you are a University of Dayton fan.

The basket looked like a Florida sinkhole to the Flyers in the first half as they buried 12 three-pointers and shot 69 per cent. As cold as it was outside, the Flyers were so hot inside they didn’t need the furnace in UD Arena.

It was 8-0 before most of the sellout crowd took their first sip of beer as UD took that 8-0 lead in the first 90 seconds. And Jordan Davis scored eight of the Flyers’ first 10, burying two threes in a row.

And from there the Flyers poured it on like hot coffee on a bare palm, beating VCU’s full court press with quick fast breaks, tearing it up so efficiently that midway through the first the Rams called off the press, something that seldom happens.

By halftime it was 66-41 and Darrell Davis was unconscious. He didn’t miss a shot — seven for seven that included three for three from three for 21 points. Four different Flyers had two or more three-pointers.

The Flyers shared the basketball like a family passing the mashed potatoes at Thanksgiving. They had 24 baskets with 22 assists in the first half and finished with 34 assists on 39 baskets.

They didn’t continue their torrid shooting in the second half — who could? — but they retained their intensity the entire way.

With the crowd imploring him to shoot, to get his first collegiate basket, Gruden shot a three and missed. But in the dying moments he buried a deep three, the 17th three of the game for the Flyers, a team record.

The crowd and his teammates went bonkers. 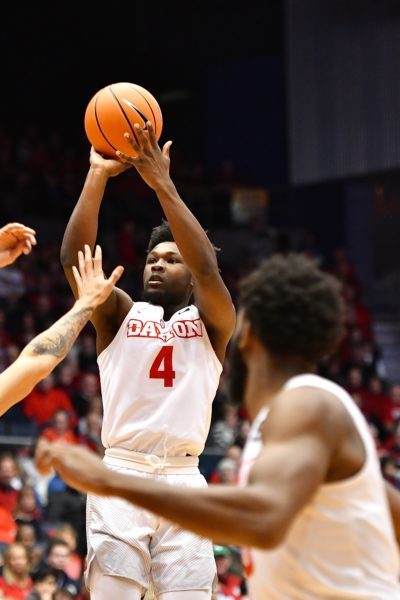 Freshman Jordan Davis got in early on the Flyers’ three-point barrage.

The Flyers entered the game 270th in the NCAA in three-point percentage, 33 per cent, but hit 17 of 32 (63 per cent) as half their field goals were three-pointers.

When the Flyers score 71 or more points, they are 9-and-0 and on this night they nearly had that many by halftime.

It there ever was a team effort, mark this one down with capitals: TE. All five starters finished in double figures.

Darrell Davis tied his career-high with 28 and added nine assists and five rebounds. For the night he missed one shot, a three-pointer early in the second half. He finished 9 fr 10 and four of five from outside the arc.

Jalen Crutcher nearly had a triple-double with 12 points, 10 rebounds and eight assists.

For VCU it was a one-man show, albeit a side show. Justin Tillman, a 6-7 senior and the only returning starter this year for the Rams, had his seventh straight double-double with 26 points and 12 rebounds.

It was an extra sweet victory for Grant, UD’s first-year coach. He began his collegiate coaching career at VCU and average 25 wins a year for the Rams in his three years, including a school record 28 wins in one season.

The Flyers did it without 6-foot-10 red-shirt freshman Kosts Antetokounmpo, who was benched with flu-like symptoms. 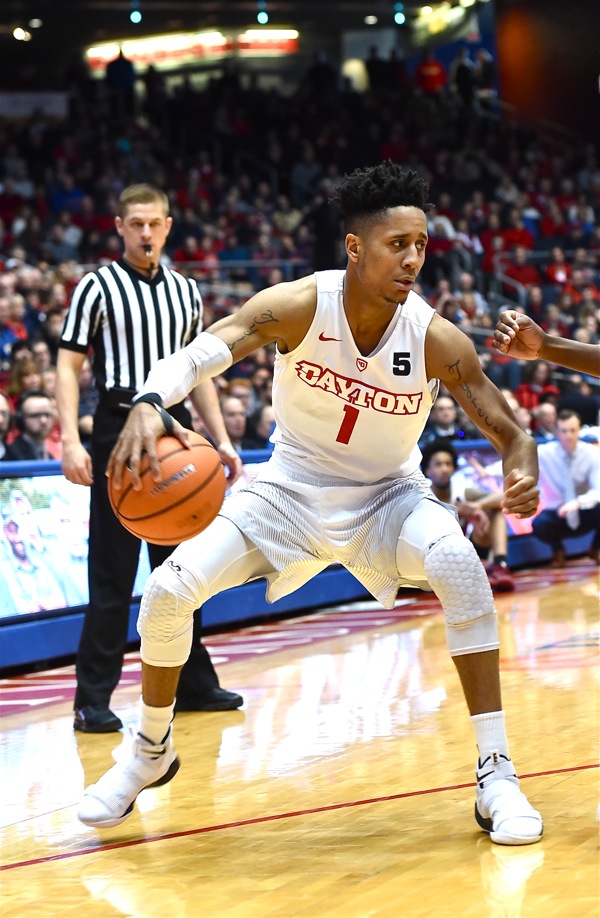 Senior Darrell Davis missed but one shot all night and tied his personal high for points 28. (Press Pros File Photos)